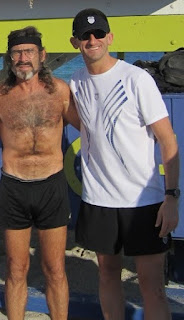 Two years ago, I wrote about running with the “Raven,” a South Beach legend who has run eight miles on the beach every day for the last 37 years.  As I begin preparations for another trip to the greater Miami area in the next few months, my thoughts went back to Raven. I assumed he was keeping his streak alive, regardless of what was thrown his way.

Then serendipitously yesterday I received an email from a runner in Miami who answered that question.  She had actually heard about me from Raven himself, a.k.a Robert Kraft.  In the email she mentioned a project being put together to record the Raven’s story through the writing of a book. In addition, she’s teamed up with another Raven Runner (what those of us in his "flock" can call ourselves after one run with Mr. Kraft) hoping to film a documentary.

While I have mentioned I am not a fan of streaking for the sake of streaking, I am very intrigued by Raven and why it is he feels so compelled to do what he does every single day. The girls have posted a video and information about the initiative on a fundraising website called Kickstarter. Given my personal connection to Raven, albeit far less than those who run with him hundreds of times per year, and my desire to learn more about him, I decided to share the link for those who wish to help the cause.

The thing that sets Raven apart goes far beyond running eight miles every day for the last 37 years (?!) He has his detractors but he seems to have really built a community together all in the name of exercise.  Obviously, anyone who is trying to get people to exercise is doing good work in my opinion. As such, I wanted to get the word out. 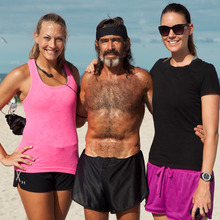 The two artists behind the project, writer Laura Lee Huttenbach and photographer Mary Beth Koeth, seem like passionate and talented young individuals. They are also picking a subject matter which is rich in both depth and breadth.

If you want to learn more about their project, you can visit RunningWithRaven.com.  They have less than two weeks left to reach their fundraising goal and make this project happen.  Here's hoping they get what they need.
Posted by Dane at 6:22 PM