The New York City Marathon recently decided to end its bagtransportation from the start of the race to the end.  Already a logistical nightmare to get 40,000 runners out to Staten Island, some four hours or more before the race started, the directors decided they would not ferry bags of extra gear and clothing back to the finish for the runners.

Now, if you signed up for the race with the understanding that this would be one of the amenities you paid an $65,000 registration fee for (a slight exaggeration) then I feel you have every reason to be a little miffed. A race should not be allowed to promise something for part of a fee and then take it away once virtually everyone pays for it. 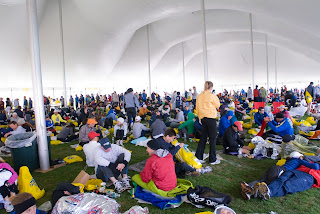 As the complaining became vociferous, the NY Road Runners (who organize the race) abated and stated they would in fact ferry bags after all.  Good for them.  I support that decision. But if they also said, “Hey, next year, this ain’t happening, just so ya’ll know!” (Don’t ask me why my fictional NYRR rep has a southern accent) I would fully support that as well. You see, suck it the heck up, people!

Is it possible the weather could be a little inclement on marathon morning? Sure. Could it be uncomfortable out there if you don’t have proper gear? Yeppers. Are there mountains of ways in which you could deal with this situation as a runner? Assuredly.

1.    You could easily just not run the race.  This is not 1977 when there were like 50 marathons nationwide. A quick perusal of any website will show there are like 500 plus marathons out there in the U.S. If the restrictions make this race undesirable for you, then don’t do it.
2.    Buy a slew of dollar clothing at Goodwill and simply leave it at the start. For $20 you could have a full sweatsuit, mittens and a wool cap to keep you warm. You stay warm and help stimulate the economy. In addition, you help Goodwill, for chrissakes. Where is the downside?
3.    Realize that runners have become a tad bit of a bunch of whiny babes and just shut up. Running used to be the outside and fringe sport.  Now it is far and away the largest participatory sport in America.  Oodles of money (that is the actual amount of money according to Running USA) are spent every year by runners across the nation.  Runners are no longer the freaks in long underwear getting beer bottles thrown at them when they run on the roads. They are mainstream and can make more demands. This is all wonderful.  But with it has come a sense of entitlement. To be honest, it is rather annoying to me to hear these gripes and I love running. I can see those people’s points most of the time. But imagine what non-runners must think. 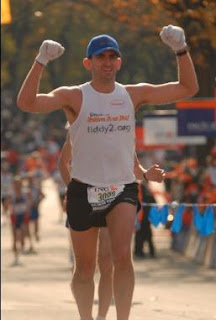 The fact remains there are a plethora of ways to deal with this inconvenience.  I ran NYC in 2006 and remember a man who had brought an inflatable pool raft with him to the start. He blew it up when we landed on Staten Island, laid down comfortably on the ground, pulled his hat over his eyes and promptly fell asleep. From the look of the clothes he was wearing, I am guessing not a single stitch of clothing was one he cared to see again. Brilliant.

Believe me, most of the events surrounding the NYC Marathon vex me.  But this is not one of them. With just a little thought it shouldn’t bother you either.
Posted by Dane at 6:25 AM

You make some excellent points. I love the inflatable raft idea!