I haven’t really focused on marathons this year. My usual obsession with numbers and stats has fallen by the wayside in 2012. When I ran the Mesquite Tri-State Marathon last week it got me thinking again about the numbers. I realized I hadn’t run as many marathons as I thought I had.  Let me explain. 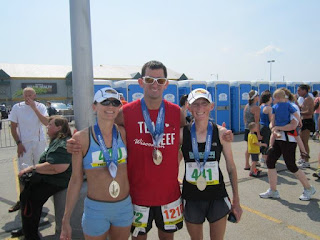 In May I started the Green Bay Marathon.  As I wrote in my recap, the race was cancelled in the middle due to a combination of factors surrounding the heat of the day. I had a friend signed up for text messages and when I finished the race, she got an exact time for my finish.  No finishing times were actually given for anyone not in the top 5 and after walking the last three miles, I definitely wasn’t one of those top five.  But I finished and had a finishing time from my friend. That means I ran the marathon, right? Well, upon further review, I do not think so.

I have been a pretty big stickler for what I feel makes a marathon ever since I ran 52 consecutive ones in 2006. To me, if there weren’t other participants or the race was on a treadmill or something other than an actual footrace, I did not feel it was an actual race. When the Green Bay Marathon got its plug pulled, I wondered what I would call it in my own personal log books.  Then, I was in bike crash, a dream apartment opened up, I moved and the rest of the year has flown by.  Only recently did I begin to think about my marathon total again.

So, as it stands, with the Mesquite Tri-State Marathon last weekend, my marathon total is 142. No bragging, just stating. I also don’t see that total changing drastically in the near future. My potential 150th will probably happen sometime in the fall of next year. But how I get there, to that 150th marathon, should be rather unique.

Might as well be doing something other than checking off another marathon finish, adding another medal to the pile and expecting accolades for doing so, right? Stay tuned!
Posted by Dane at 10:41 AM

Now i'm seriously wondering what I got myself into, re Dec 2013 Tri-State Marathon. I'm a 66 year old Canadian Clydesdale, have completed 4 marathons this year, first one in 2012.
Hoping for a particular time, don't want to say as it's embarrassing - thought by doing, on my own, knowing no one, no pressure, I just may be able to get-er-done. Attracted by the downhill start, thinking the balance was a little hilly but not as bad as you and your followers stated. What the heck did I get myself into!!!