For those who do not know, age grading stems from the undeniable fact that both men and women lose strength and slow down with age. About a decade ago, with more runners entering the Master’s category, a way was apparently needed so all masters runners could be compared to each other in one category. By making all masters equal regardless of whether they were 40, 50, or 60 years old, awards could then be given to the athlete with the best performance.

I have two thoughts on this subject:

1. This was the product of the Baby Boom Generation getting older and once again thinking that the world had to revolve around them.

2. The whole idea of age grading has always seemed somewhat ridiculous to me.

Absolutely, age is a factor in runners slowing down as time goes on. However, I can think of fewer better occasions to say, “Well, that’s life!” In addition, while indeed a factor, age is far less a decider of someone’s overall race time as are natural ability or training. Some people are simply born with “it” and some are not. Some can work very hard and get to the maximum level that the skills they were born with will allow, but there comes a point when that ceiling is reached for those of us who are not elite.

Given that, I think age grading is insulting to those who have maintained physical fitness over the years. They do not need to receive help in order to lower their times. Likewise, for the most part, those who get a higher ranking because of the age-grading know that they did not actually beat the people who finished in front of them.

This all came to my mind as I recently read an issue of Running Times which had an article about the greatest age-graded times ever run. Some of the times were just mind-boggling. I then read another issues about more amazing times from the grey-haired.  But the problem 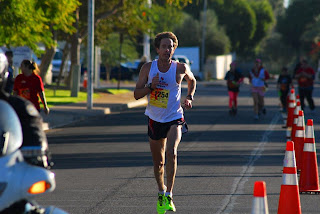 is that while neat, the charts are unnecessary.

There is no age-grading calculator out there that would allow me to run times like Dennis Simonaitis, a Master’s runner in Draper, Utah, who at age 50 runs times I still have never achieved. If anything, I need to handicap him. How about the timeless Colleen de Reuck, who at the chipper age of 45 ran a 2:32:37 marathon?  I do not need age grading to tell me those are ridiculously fast.  These runners are still excelling well past their so-called primes.

It was nice to see Running Times editor Jonathan Beverly revisit an issue he thought he would be all for when he became a Master. Now that he is actually a Master he is not in favor of the idea (to paraphrase, of course). In three plus years, when I become a Master, perhaps I will change my mind as well and be all in for these wonky math charts which help me run faster than I ever actually had.

As a 55 year old and very average runner & boomer who doesn't believe in the stereotypicial thinking that you and other have about the world revolving around us.

I find the age grading chart interesting, but mostly humorous at best and believe that most boomers do as well.

I don't take them seriously and my PR's are my PR's whether I did them at 25 or 55 (although I did make a concession to aging and have gone to the year's best times in addition to my PRs).

No I am not an elite master or even a local area age group competitor, unless someone doesn't show up. However, I still get out there and compete against the young guns on the same race terms and once in a while it is fun to surprise someone, when a gray haired old fart passes or manages to stay ahead of them.

Naw I don't care about age grading and I really don't see too many others who really pay much attention to it who are in my age group.