I was fortunate enough to be asked to be the first ever speaker at the pasta dinner for the Evansville Half Marathon presented by the YMCA this October. Sponsored by the Women’s Hospital, I had heard great things about this race and was excited to be part of it. As such, given I had never actually ran the race, I

wanted to see the course and provide readers with a preview of it if they too are going to be first timers.
My friend Michelle Walker (known to many marathoners as Mom O’ Six; she’s Irish [I have no idea if that is true]) and one heck of a runner herself set upon this weekend turning what could have been a lonely run by myself into what was basically a small-scale version of the race. I guess when you are juggling 6 children, getting 30+ runners together is a piece of cake.

Suffice it to say I was pleasantly surprised when so many people showed up to run 13.1 miles with me, especially since so many were in various stages of recovery from the Boston Marathon, the Kentucky Derby Marathon or a variety of other races the week prior. Prior to starting, I met for the first time, re-met and chatted with virtually every one of them.  Some I did not get to spend as much time with as I would like but there is always the next run!

We found out that we would have three aid stations along the course at approximately miles 3, 6 and 9. A local running store, Ultimate Fit, was gracious enough to provide those for us. Given that the day got to be quite sweltering, this was beyond appreciated.

I had heard many people mention that they had run numerous half marathons and this course just happened to be their personal best.  The way it is set up I can see completely why that is the case.

Runners start right outside of the Francis Joseph Reitz High School. After a quick loop around one heck of a high school stadium, a small climb begins. I think this is brilliant course design.  I have given lots of advice ion my day to runners asking how to run a smart race.  The number one thing I have said is to start out slow. Well, as you can see from the first few miles of this course, with a few small hills, it almost forces you to do so.

By the second mile you have crested the last of any hill worth mentioning and slip by the Hilltop Inn, voted the Manliest Restaurant in America in 2009. Known for its brain sandwiches, you might not want to grab one at mile 2, but think about it for later.

At this point a long nice downhill brings you through a part of town that with two quick turns has you crossing Pigeon Creek over a barely noticeable bridge and suddenly you are three miles done. A long straightaway on Fulton Ave heading north is next. I love long straightaways because you can really get into the race. No need to think about strategy and curves. It is all about beginning to feel what your body has and simply running away with it. 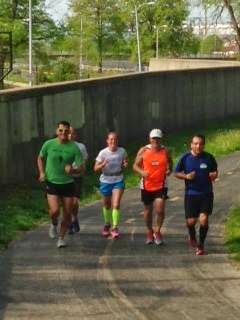 However, I know not everyone likes the same thing with regards to course so that is why it is nice after this mile plus stretch, runners are taken off of the city streets and onto the Pigeon Creek Greenway Passage. Running riverside for over a mile, with the babbling water beside you, trees overhead and green all around, it is a stark contrast to where you just were.

A quick jaunt around Garvin Lake has you running in the shadow of Bosse Field. Known for being used for game scenes in the movie A League of Their Own, it is the 3rd oldest stadium in regular use in America, after Fenway Park and Wrigley Field.  Now that is some history!

After slipping by Bosse Field, another long straight stretch affords itself to runners looking to open their strides and turn on the jets. Down Main street you go (how quaint) before passing under an interstate.  The next few miles encompasses a few turns but nothing too ankle breaking.  You get to run a little bit on the well-maintained brick streets of old parts of Evansville between some old style buildings. Turning at the Evansville Museum of Art, History and Science you head away from downtown and back into the neighborhoods. 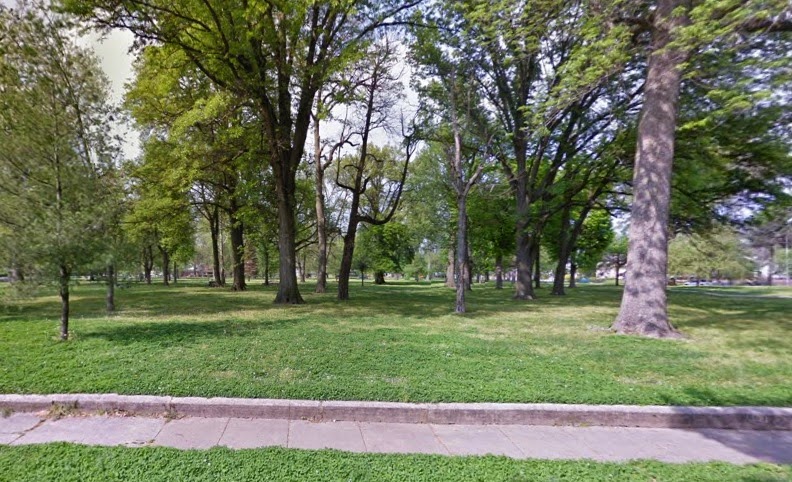 Here is where I can only hope townsfolk will be out cheering you on, as you pass by hundreds of homes. The next few miles showcase some of the various streets of Evansville with the next big attraction being the greenery of Bayard Park. When you hit this wonderful urban park, flush with trees, park benches and a playground, you know you just have a 5k to go.

Bear in mind that since that Hilltop Inn, the only change in elevation has been the hop skip and a jump over the bridge at Pigeon Creek.  If the weather is cooperating, this course can be very fast. After you leave Bayard Park, you have another mile long straight stretch to prepare you for the final two miles. Turning right on East Riverside Drive you know that in about a mile you will be hitting the Ohio River for the home stretch. 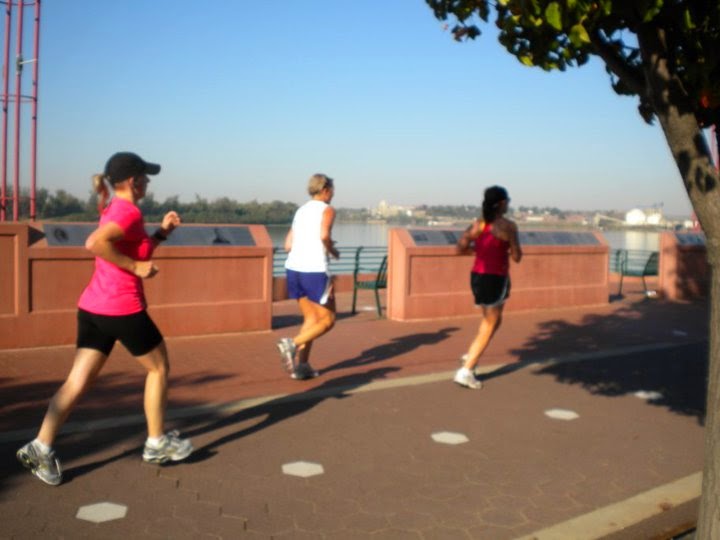 This final portion is a new(ish) addition to Evansville as it is yet another city doing what it can to make use of what it has to help people get fit. This river walk promenade along the Ohio River is a fantastic backdrop to what I suspect will be a fantastic race. I cannot wait to actually experience it on race day. Although it will be hard to top the medals that Michelle's kids put around our necks as we finished the run!

To the dozens of people who joined me to preview this course (including many who had run it previously and one person who ran the further she had EVER run on this particular day!) thank you for spending your Sunday morning with me. I look forward to seeing you all in October!