I read an interesting story about new NBA Commissioner Adam Silver in which Ian O'Connor said "Everyone will line up now to give their "attaboys" to the rookie commissioner."  Exactly.  The new commish claims to have known Sterling for 20 years and never seen any racist acts.  OK, if that is the case (bullcrap) then why not weigh that in when looking at a man's darkest moment? If you audiotaped some of the things I have said, I doubt many of you would think of me as the infallible saint and arbiter of all-knowledge that so many of you (re: me only) do now. I will tell you why. Because is is easy (and mostly fruitless) to follow mob rule and attack the thing that doesn't need to be attacked.  Follow along with me here.

The interesting parallel I see here is to the Sandusky case. (This is not the Paterno case; calling it that irks me every time I see it.) I just finished reading Joe Posnanski's book, Paterno. As a Penn State grad and Paterno lover it can be hard for me to set aside my love for my college and this man.  But I think I am about as good at putting aside things that I care about to see a situation as neutral as possible as anyone can. I get in trouble with friends all the time for not "being on their side" when I am thinking things through about the facts presented to me. I was very pleased that the logical arguments I had come to were pointed out in greater detail in Posnanski's book.  I would highly recommend reading it. 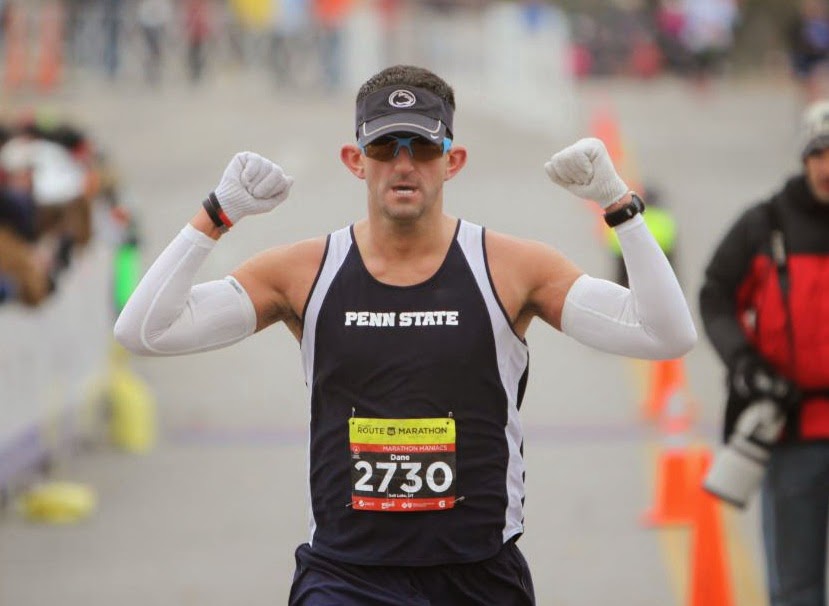 (The only thing that bothered me was that in the book Posnanski mentioned that no fans were thinking Paterno could pull his Penn State teams out of the gutter in the early 2000s or when the crap really hit the fan right before Paterno's death that anyone stood by him. Exhibit A to the contrary would be one young Dane Rauschenberg at the Tulsa Route 66 Marathon in late November brazenly wearing his PSU singlet with pride. But I digress.)

In reading this book, however, and being in the middle of the Sterling crapstorm I could not help but think about how David Stern, the previous commissioner, was receiving no blame whatsoever for apparently allowing a raging racist to loom large in his league. By all accounts, Sterling's racism is not even a thinly veiled secret given his fines, sanctions and out-of-court settlements for discriminatory landlord actions.

Yet, Teflon Stern seems to have received not even a wrist slap for allowing Sterling to be Sterling when it was clear Sterling was who he is, well, except to Adam Silver. Silver claims to have known Sterling for 20 years, yet had never seen signs of the behavior documented in court records and news accounts.  Let's ignore that everyone else seems to know this already.  In the case of Sandusky, where he fooled thousands of adults, police officers, social workers, etc, Paterno "had to know" what was going on, say those ready to vilify him. But Stern couldn't have known? Silver never saw the things we all were pretty much aware of if you knew anything at all about the Clippers?  OK, until Blake Griffin basically no one cared about the Clippers so you can be forgiven. But still, where is the outrage?

Racist practices of evicting families and causing their lives to be completely wrecked have to be somewhere on par with child molesters, right? They are both pretty bad things. And easy to get outraged about. Which is why the laudatory remarks for Silver outing the racist are laughable. Of course, he was going to do this.  Public opinion about superficial attitude towards racism have changed. It is difficult to be an out and out racist these days. You have to be subtle and conniving to get away with it. Like a child molester.

Here is where this gets interesting and divergent at the same time. In the same small period of time that a man's personal thoughts were recorded and used against him to force him out of his ownership of a team (a man, mind you, who by all accounts seems slimy and an asshole and just awful but employees black head coaches, black staff members and black players) a Russian long distance runner receives the smallest of penalities for apparently being a major cheater in her sport. 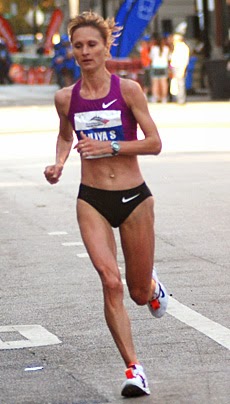 Today, the Russia Athletic Federation annulled all of Liliya Shobukhova's race results since October 9th 2009 after finding abnormalities in her biological passport. Pending any appeal, she is stripped of her 2009, 2010 and 2011 Chicago Marathon victories, as well as her 2010 London Marathon win, and may be required to pay back prize money and appearance fees earned from racing. The key word here is she "may" be required to pay back money.  For all intents and purposes an athlete has been cheating for half a decade, setting records, claiming prize money, appearance fees etc. and she "may" be required to pay some if it back.  Also, her two year ban from the sport? It is retroactive. She could race again in January of 2015. In other words, a slightly longer than normal break for an elite marathoner.

So to recap, a seemingly despicable man says some things recorded by his girlfriend with apparently a vendetta against him and those words, not his actions, might force him to lose ownership of something he has had since 1981. Another person, appears to have used a systematic drug taking past to secure millions of dollars for herself (and stealing it from the others who should have been awarded it) and she may have to take the equivalent of an European Summer break.

To be clear, I think Sterling seems like an awful person. Have ever since I started watching sports and I know next to nothing about him. I couldn't understand how the NBA, with all of its "best interest" rhetoric could allow a man to own something that has, by and large margin, been the worst sports franchise in the history of sports franchises. But like Mark Cuban, an owner constantly fined for doing things probably ten times less worse than Sterling has said, this is a slippery slope. I get that this is not a First Amendment "free speech" issue. We went down this road with the Duck Dynasty fella a few months back. Say what you want; this is America. Just get ready for the repercussions from your employer if you have a "no asshat" clause in there somewhere.

But the whole issue feels like a thought police episode wrapped around attacking the easy to attack problem without bothering with the underlying much larger and systemic problem. Getting rid of Daniel Sterling isn't going to end racism in the NBA. Mob rule and knee-jerk reactions to placate unwanted feelings in your belly usually don't fix the problems. Firing Joe Paterno, vacated his wins, penalizing the university which seemingly had nothing to do with Sandusky won't help any of the child victims of Sandusky feel any better.  But it will make people who have nothing involved or invested in either feel better about themselves.  Because it is easy to hate racists and child molesters, especially when they are right in front of you. 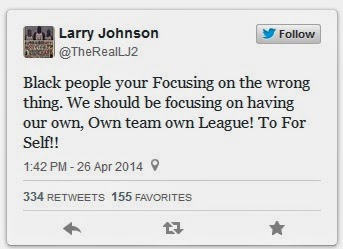 Yet thieves and cheats, like Liliya Shobukhova or every single bank executive or finance person who helped caused the financial meltdown of American in 2008 yet haven't spent a single day in jail (read Michael Lewis's Flash Boys or Matt Taibbi's The Divide if you aren't enraged enough) receive paltry penalties. One needn't attack all problems to attack some of them but it is good to start with the right ones.

Perhaps we can start with Larry Johnsons' grammar. Or is that Grandmammar?
Posted by Dane at 7:42 PM