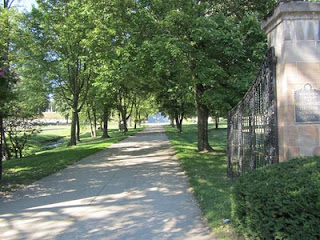 This isn’t because I am creeped out by being around them or get the heebie-jeebies when I go into them. Everyone there is dead. It's pretty safe. Also, I guess, upon further reflection, I don’t actually dislike them. They are interesting in that they provide a wonderful and rich source of history, especially from a time when there is little other record of what happened in that era. They are also not a waste of valuable real estate either (until they are full) considering how much a plot of land goes for these days. As such, they are decent usages of land (unlike golf courses.) What I guess I dislike is the idea of future cemeteries being built. Or maybe I just have zero desire to be buried and hope that my body can be used to help others once I no longer need it.

But man do I love running in cemeteries. 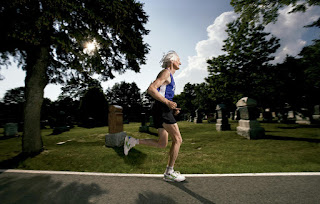 When I plan on going for a run in a cemetery, I always wonder if it is disrespectful to those who are buried there for me to be running on the roads that circumvent their final resting places. Like I am flaunting my whole being-alive-ness or something. But if it is good enough for Ed Whitlock, it is good enough for me. Ed Who, you ask? Ed Whitlock is probably the greatest age group runner ever (or at least in the discussion.) At age 73, a few years back, he ran a 2:54 marathon. Not a half, but a full. Yeah. Well, Ed does virtually every single mile of his training at the cemetery two blocks from his home in Toronto. Loops and loops and loops around the cemetery, avoiding even the slightest hill on the backside of the course. But Ed runs cemeteries more out of convenience than for the reasons why I like running in cemeteries. (Addendum: We lost Ed this past year.  That sucks.)

They are quiet. Well-manicured. Orderly. No cars are going to go flying by spitting dust into your face. They are, by nature, serene and usually quite beautiful. In a city setting cemeteries are often the closest most would ever get to a national park or being able to go for a trail run. 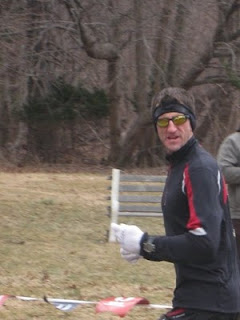 I conducted a poll amongst friends and found I was far from the only one who enjoyed the safety and beauty of running in a cemetery, but wondered about the etiquette involved. One runner said you should simply treat the land as you would anything else that isn’t yours in the first place: with respect. Heck, cemeteries aren’t really for the dead anyway. They are for the living.

So do as much living as you can. Chances are pretty good that many of the deceased you will be running around were runners themselves at one point. They are probably happy to have you out there enjoying the land and exercising instead of playing the Wii. Hopefully they won’t offer any tips from beyond, though.

I may just discover fast-twitch muscles I never knew existed if that were to happen.
Posted by Dane at 9:26 AM

Oddly enough, I went for a run in Titusville this morning and I turned around at the gates shown in that photo. I guess I should have gone inside.

I was in DC this past spring and did a long run out to Arlington and back downtown. I wanted to see Arlington cemetery and decided to combine it with my run. FYI, you can not run through it. They stop you. With guns.