I am not much of a gadget guy.  At least not for my athletic life. Having an aversion to lots of stuff hindering my sport is one reason why while I do fairly good at triathlons, I will just never really love them. Too much stuff to contend with just to get to the starting line, let alone during the event. Running? Sweet bliss. Pair of shoes and maybe a watch. Even the watches I have that utilize GPS capability only get used about 10% of the time. I run in the same areas fairly frequently, I know the distances, and I just want to know the time.

So when I heard about the Timex Runx20 watch, I was intrigued.  It has GPS-functionality but really, that is about it. That sounds simplistically wonderful.  Time to take it for a run. 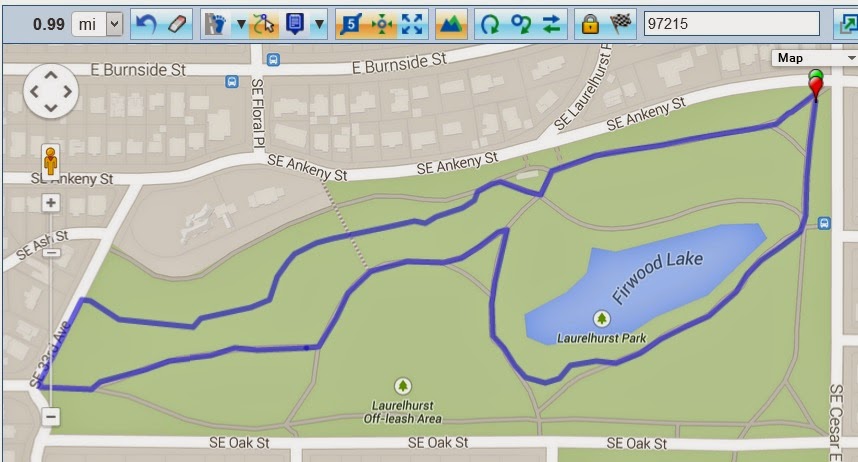 When I want to test a watch it take I to Laurelhurst Park in Portland just a mile from where I live.  There is a loop there that is exactly .99 of a mile long where I do more than a few of my runs. The loop is not just a nice oval but rather a twisty-turny loop that goes under heavy tree cover for most of it.  In other words, it is perfect for testing out how accurate a GPS usually is (short answer: not really all that accurate.  But I expect that.)  I did four laps of LHP with the Timex RunX20 on and got .96, .94, .95 and .98 per lap. Honestly, that is far better than I expected.  But it also goes to show people who rely on their GPS too much how relatively unreliable they are (i.e., stop complaining to races when they measure "long" because your GPS says they did.)

Looks-wise, it is pretty sleek. I have the lime green which pops nicely.  I normally go for the plain black versions of watches but this one spoke to me. From a usability standpoint, I read in another review that said it has a high 'just works" factor, and I have to agree. It is rather intuitive in its interface system with easy-to-navigate face. It is customizable for each runner with height and weight, it has a solid 6 hour battery life in GPS mode, and has a pleasing little vibrate/beep every mile. Customizable watch display with a decent but not overly large watchface (with contrast control.)

From the cons-standpoint, the watch is an island. By this I mean it has no way to upload all of its data to third-party software or Strava or whatever else you use to tell people how far you ran that day.  I know for some this is a deal breaker as a run not shared on Instagram didn't really happen.  For others, like myself, I don't mind at all. Considering the watch runs for well under $100 (I saw $80 the other day) I think it is a marvel. Will it blow you away with bells and whistles? Nope.  Is it all you need if you want a reliable GPS with a few basic functions? Yes!  Here are some quick stats for you:

With the solid battery, slick functions and usability anyone can understand in a few clicks, this watch will handle most needs of most consumers. If a watch that has a GPS in it can be a workpail watch, even in lime green, this is that watch.

*Disclaimer*  I have a partnership with Timex which means I sometimes get free stuff. I don't have a "sponsorship" which some people like to loudly proclaim when some very wise company sends them a pair of socks in exchange for those people loudly exclaiming about that company's products ad nauseum. That said, I review products and give my honest assessment of them in order to let others know how they may work for them. If you don't like this, why in the hell are you reading my posts? You know that indifference is the opposite of love, right?
Posted by Dane at 11:19 AM