I read a cool story about an inspiring individual. Unfortunately, I am not sharing it because of two things which irked me.

1. The person is dealing with an illness. They finished a marathon in spite of their doctor saying "which mile do you want to die on?" How outrageous, right?

Is it possible this was said? Sure. Probable? No. First, the claims which people pin to their doctors has always fascinated me. Having many close friends who are doctors, I know their bedside manner and what they can and cannot say to people. Most of what people say a doctor has told them would be ethically, if not legally, wrong.

People telling stories and "journalists" writing them have used this lazy narrative for eons to encapsulate either their own perceived doubts or the accumulated doubts from naysayers they have experienced in their life.  Rather than lay that entire history out, it is easier to say "Susie G at Trader Joe's said I couldn't run a sub 2:00 half. This will show her!" and everyone rallies behind you giving Susie the ole what for.  It moves the story forward. I get that.  But it is often full of crap. (I touch on that method in an article about a writer who tells the tale of picking up and running across Spain just cuz.") I learned long ago that people will either be impressed with your story or not. Rarely does embellishing it make fall off the fence onto your side.  So many tales are fascinating without the added oomph from a fib and when the fib is found out, it kills the truth.

The cousin of this type of story is the "I didn't even train and wasn't even aware this race existed until I happened across it in the middle of a training run! So I signed up and beat everyone! Let's pretend I haven't been in intense training mode for months prior to this and congratulate me for my ability to somehow be oblivious about a 20,000 person race in my backyard AND my superhuman talents!" Think I am lying? I literally, while writing this, happened over to twitter and saw this:

Accountability is out the window. We see it in politics and now with social media, the little white lies you used to tell to 5 people are now things we share with the world. Again, perhaps this person did just set a new 13.1 PR after doing nothing for a week. Perhaps.


2. The runner says that “Racing wasn’t fun. I was there to get to the finish line as fast as I could.” This is something which has irked me for quite some time. The notion that running hard is not fun.   I wrote about that in Fast is Fun. Let's face it.  We live in a world where many runners are not running the races they run anywhere close to their potential. Completing is celebrated more than competing.  Now, I was about to say "That's fine" when I erased it and started over. It is not fine.  Sure there are instances when just getting to the finish line is admirable. But continuing to just get to the finish line, without remotely pushing your limits, should rarely be applauded. However, my beef is with the idea that running fast is mutually exclusive from having fun. 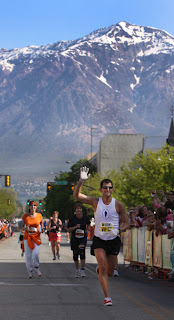 You can have fun at almost any pace you want. Watch this video of Deena Kastor winning the bronze in Athens and tell me if she is not the most overyjoyed person ever. (If you don't have time for 2:41 minutes of awesome, just jump to 1:45 in the video.) So wracked with happiness is she that she is in tears while still running the damn race!

Personally, when I set my marathon PR, I was so overjoyed I was waving to the crowd in the homestretch. I was fortunate enough to know the announcer who was aware of my goal. As I neared the finished he shouted it out to the crowd who cheered me onward. I had finally, after three 2:51:xxs, ran a sub 2:50 marathon. I was ecstatic.

My point here is not to denigrate the subject of the article.  In fact, I think it is wonderful what she did and when you read she set a new PR in what was probably her last marathon ever (because of her terminal illness), it is even more awe-inspiring. However, following the points I have delineated above, I know that the tale could be so much better.

I know it sounds like I am nitpicking. That is not my intention. But when you are watching a show or movie and the people in it do something glaringly wrong in a field you are a specialist in, it almost ruins the movie for you. That is how it is for me and reading other writer's articles. I am already happy to have my heart strings pulled. But I also know that the music is so much sweeter when the song being played is done so with defter hands.

(And because it is still a darn good story, and I have not exactly been vague and you could find it yourself, here is the link to the article itself.  I do that because I still wish to celebrate the runner and their accomplishments. )
Posted by Dane at 11:47 AM