I have had a partnership with Karhu for well over three years now. So, if you feel that affects my ability to properly review their shoes, so be it. Also, this shows you have no idea how much I have no problem speaking my mind on whether a product is right for me or not.

So, with that out of the way, let me review  both the Fast 6 MRE and the Fluid 5 MRE, two of the newest shoes from Karhu.  *clears throat*

THESE ARE THE BEST SHOES EVER!!

OK, just kidding. But I will tell you this much: these are some good dang shoes. 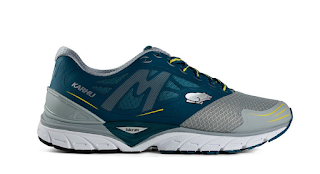 I will start with the Fast 6 MRE (MSRP $139.99). I have always thought the name was interesting as the shoe is Karhu's heaviest model. Weighing in at 11.2 ounces, the Fast6 is a mildly heavier shoe. It isn't nearly as heavy as many other brands out there (Hoka, for example) but it's weight is at least worth mentioning.

As with all Karhu, it relies on the midfoot fulcrum for its special features. That is where the MRE comes in. "MRE" stands for Maximum Rolling Effect, which Karhu says blends a plush ride for the recreational runner with an improved rolling effect. I think that is an excellent description. I put about 60 miles on these shoes before forming an opinion and plush is a perfect fit.

The Fast tends to run a little small but Karhu specifically addresses this issue on their website. I don't recall any other shoe company going out of their way to make sure customers are aware of a potential sizing issue as such. Usually you have to rely on a shoe salesman or friends to tell you or perhaps by trial and error. (Just another example of what a great company Karhu is and how disappointed I am when I mention them and get a blank stare from runners.  But I digress.) So, I sized up a half-size and had no problems at all. In fact, I think I could have stayed at my usual 10.5 and experienced no major difference but better to err on the side of caution.

Like with the Fluid 5 I will get to next, I took the Fast 6 on runs of varying speed, distance and terrain. Obviously not a trail shoe, the cushion still provided ample amount of support and never felt like I would feel a stone through the shoe at any point. I traipsed up Mt. Tabor in Portland which allowed me to run on road and trail, both cedar chips, mud and roots. Also, Tabor is great to test how a shoe runs up steep uphills and screaming downhills. They performed admirably on all. This was one solid trainer. I felt no problems with any hotspots and had a great fit all over.

Could you race in them? Sure. However, I feel they are best suited for longer training runs, maybe even slanted more towards a recreational runner who is putting in 20-30 miles a week or so. Without a doubt a heavier runner looking for a tad more cushion would love this shoe. As as mentioned above, if you were coming from some of the other brands out there which are always a tad heavy, this would feel very light. It is indeed all about perspective. If you want something with a little less heft, well, that's where the Fluid 5 comes in. 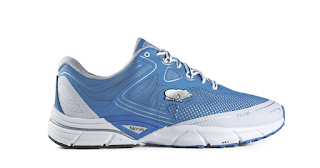 Don't get me wrong, the Fluid 5 (MSRP $129.99) is not exactly a track spike, either. However, even at 10.5 ounces but it simply feels much lighter than it is. I noticed this difference after the first run and assumed that was because I was moving from the Fast 6 to this one. But even after a few runs, and mixing in other shoes, it still felt like it weighed less than it did. So off the bat that was a big plus.

The sizing was normal with the Fluid5 so I stuck with my norms on that. Everything worked out perfectly. Equipped with a half-length fulcrum (as opposed to the Fast 6 with a full-length fulcrum) The Fluid5 felt a bit more responsive. As if the shoe simply wanted you to get out of each stride and onto the next one, almost propelling you forward.  I did a few more runs with this show on the Waterfront in Portland.  Flatter than some of the other runs I do, it was meant to test the shoe out as a racer.  I could easily see myself taking on a road marathon in these. But just because I am weight snob, I will probably use them mostly for training. When you weigh 185 lbs, you want your shoes to be as light as possible over many miles of racing.

I had read that this shoe could feel a little stiff and I am unsure where that came from. I went into the runs with that in mind, searching for stiffness and found no such problem. In fact, the seamless upper reduced weight and provides excellent flexibility. I took it again to Mt. Tabor but this time utilized the slightly longer than half mile square around Reservoir to burn off some fast miles. It handled the speed and the tight turns more than adequately.  And it looked all kinds of snazzy to boot with the blue hue and the bear which pops off the shoe. (Karhu is Finnish for "bear", bee tee dubs.)

All told, I got a good 60+ miles out of each pair of shoes before forming an opinion. I can't see why they won't continue to be great shoes like everything else Karhu puts out.

Stay tuned for the Flow 6 MRE review. I am extremely excited about this shoe.
Posted by Dane at 12:40 PM

I love Karhu shoes, especially the Flow. I usually switch between the Flow and Fast depending on the distance of the run. When I trek Mt. Tabor I generally choose the Karhu trail All awesome! I appreciate your posts and I generally run solo, but I would love to meet at the top of Tabor some time. My family and I reside in SE Portland off of 82nd and Division. I teach Special Education in Gresham. My son and I recently participated in the Mt. Tabor Blast, which is Bridger's annual scavenger hunt in Mt. Tabor. He is in Grade 3 at Bridger elementary. Running in Karhu running shoes and running Mt. Tabor is a really great time!

Hello sir, do you got any report Of flow6?