More than any other race in America, the Boston Marathon matters. How you get there matters just as much. 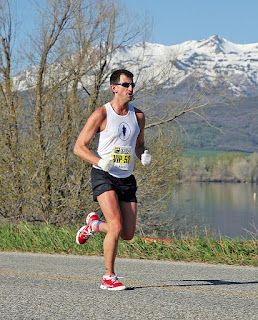 I have been fortunate enough through hard work, genetics, and luck to have qualified to run this prestigious race seventy-four different times. On 74 different days, I crossed the finish line in a time that the BAA deemed worthy for me to run the Boston Marathon according to my age and gender. That is 74 different “BQ”s (Boston qualifiers.) Some have done more. Most have not.

Last year Mike Rossi defied every logic and reason known to his own running history and qualified to run the Boston Marathon. Well, it turns out that there is no way he actually did that. He cheated. However, he would have escaped the ire of many if he had just kept his mouth shut about an incident involving his child’s principal. If you want to read more, just google this guy. Basically he brought attention to himself and his running, which caused some to look into his past, both running and life. After watching the story unfold, it became quite clear that Rossi seems incapable of keeping his mouth shut about much of anything so it is no surprise he got in hot water here.

A few months ago, my social media feeds were getting clogged by this one blogger who wouldn’t shut up about going back to run Boston for the third time. He was going to get his revenge on the course after just missing his goal of a 3:30 at another marathon, he said with bravado. Wait a minute, I thought. Given what his age appeared to be, he had to run a 3:05 to get into Boston.What's the deal with 3:30? So, I investigated. That “just missed” time of his was the PR he had set in a time of 4:40.  It became quite clear that he was only getting into Boston because he was raising money for charity.

There are many schools of thought on whether runners should be allowed to run Boston as a charitable member who has not qualified for the race on their own athletic merits. This is not going to be a discussion on that. In fact, to make this clear:

1.    I think people who raise money for organizations are wonderful;
2.    I am far more impressed with the effort of runners than I am sheer talent;
3.    I wish there were more selfless people like that in the world.

However, the reason people are raising money for the Boston Marathon is because it is the Boston Marathon. You don’t see hundreds of people raising money for the Paducah Towpath Marathon. (Not a real marathon that I know of.) There is an aura, deserved mostly, about Boston. THAT is why people run it and talk about it. Runner and non-runners alike know about the race. Say you have run Boston and eyebrows gets raised and you hear that Hmmm! noise people make when they are impressed. Ergo, if you want to talk about your decorated running career as a means for people to pay for your vacation, then you better actually have one.

So, I offered $1,000 and then $1,500 to this blogger’s charity if they hit their 3:30 goal at Boston. Why did I do this? Because if he somehow dropped 70 minutes from his time, I would be happy to pony up the cash. I also called him out because I was tired of him acting like he belonged at the race as a participant who earned a bib rather than buying his way in. Talking constantly about how it was such a great feeling to once again get his Boston Confirmation in the mail. Touting things that didn't exist. (Like saying he was a California Marathon Series Bronze Medalist, having me ask what that is, then having him delete it from his About section.)  I was hoping he would realize the difference between working hard to gain entry and posing for tons of idiotic open-mouth selfies with whatever brand of apparel or shoe he was NOT training in. After a while though, the blogger got bothered I was pointing out their grandiose posturing and swore at me and blocked me on Twitter.  Because, you know, adult stuff.  Too bad, I was about to up the donation to $2622. (This bloviated blogger continues to post to this day with seemingly zero self-awareness of how non"esteemed" he is, or any sense of decorum - comparing his "training" efforts to the chemo cancer patients he is raising money for take to hopefully not die.  Blech. He leaves a copper taste in my mouth.)

Then today, another popular blogger (kill me if those words are ever attached to my name) was banned from running Boston indefinitely. To read Gia Alvarez’s website, it would seem she did something dumb but hardly egregious. According to a post, she had twice qualified to run Boston.  However, once because of a miscarriage and another because of the birth of her child she had not been actually able to run it. So she gave her bib to a friend the second time so the friend could enjoy Boston.  Now, this is against the rules and shouldn’t be done. But a lifetime ban? 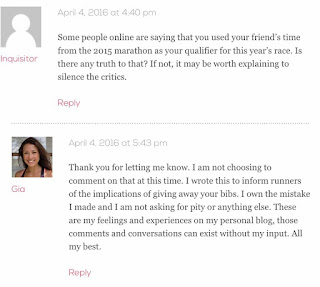 It appears, however, that Alavarez forgot to mention that her friend ran a time that would qualify Alavrez to run Boston again, and using that time, and that time alone, she registered again for Boston this year. Well, that dear Gia, if true, is a no-no. Especially when your friend runs 10 minutes faster than your PR. Gia oddly didn't decline this was the case when asked directly about it.

(UPDATE: Gia has admitted to using another person's time in a new post. Obviously doesn't undo what she did but at least she came clean. Then again coming clean after being caught isn't exactly coming clean but whatever.)

The obvious and oft-repeated rebuttal is "Who cares?" Well, many people do and with good reason. People have been exaggerating their prowess since the invention of talking. That's understandable. Cheating or lying or posturing your way into a race on Patriot's Day in Boston is not the end of the world.  Yet, just because it is not the end of the world doesn't mean that it should be ignored either. These three examples are not just people making faux pas or lacking in ability to gain entry somewhere. Rather, they are going after attention for whatever reason (blog clicks, revenge against a principal, charitable donations to fund their vacation to Boston) and therefore are open to scrutiny.

I understand scrutiny. I put myself out there. I coined the term "Extreme athlete" because I thought runner and triathlete and obstacle course racer etc was not only too wordy but also too bombastic. Regardless, I felt what I had done had earned at least a small title. (It's a REAL select club of people who have run a marathon every single weekend averaging 3:20 or better, for example.) Which is why I hold my head high being able to back up what I say I am going to do. I don't seek donations to break a world record running across the country and then go in unprepared but still taking money (and then make a movie and career off of it.) I lay it all out here for runners to see warts and all. When crap hits the fan, oh well. Fortunately, for all of the higher profile things I have tried to gain attention and raise awareness for, I have been lucky to come out on top, completing what it is I set out to do. I know much of it has to do with luck. I have far more races which don't go to plan as those that do. Yet when they do, I am going to be very proud of my efforts.

I am acutely aware of where I stand in the running world. That is why I love running so much. If you have run a 2:49 marathon, then X amount of people are faster than you and Y are slower. That's undeniable. Put out the facts and let people be impressed or let people say big deal. But put out the actual facts.

The Boston Marathon, and runners in general, do not care about your gender, race, origins, income or anything else (at least, anymore, with regards to Boston.) On the roads or trail we are laid bare and stripped down to what we are at our core. This is what unites us more than virtually any other sport. Give it your all and only the biggest of asses will not be moved by your efforts. However, try and pull the wool over the eyes of those cheering you on and you should rightfully only see their back as they walk away from you.
Posted by Dane at 7:15 PM

Thanks man! I could not agree more. Keep Boston sacred.

Interesting post. I agree with the sentiment. But as far as Boston goes: their race; their rules. They can allocate slots however they wish; I do know that they allocate slots to clubs that help out with the race, including the New England Racewalking club and sometimes a slot goes to a 5 hour-ish walker.

But, on the whole, I completely agree with your sentiment about people being dishonest about their accomplishments.

Disclaimer: I've run and walked marathons, but never close to BQ qualifying standards. By no stretch of the imagination am I the runner you are!

Well said man .when I ran Boston in the 80s btw 9 Bqs out of 11 as 2:50 was the bq .ran 2:57 and had to try again luckily I got in . It was a simple time as Boston is not that difficult anymore .i ran 6000 runners one wave and clock turned off at 3:30 open traffic and results book mailed if you broke 3:30. Now I need 3:40 as 55 yo . To me I'm proud to go back but it's not about the race anymore as hey I ran 2:35 their but the course and history .love the race but really I think qualifying with 1:36 half time for nyc is much tougher than Boston and that's my 2;50 as few can attain the ny c standards that's the solid runner of modern times

I have my feelings about BQ times- but that is my problem, not the 30 year old female that can run the same time as 55+ year old me to get in. It's the BAA's race and their rules. I don't have to agree with them, but I do have to respect them and abide by them.

In my opinion when you know the rules and don't abide by them - then you have to deal with the consequences. That is one thing about this sport. Results are a) easily quantifiable, and b) easily verified with most races posting results on the internet. So doing some of these things these people do is just dumb.

As to running a marathon for charity to go some cool place to do so? Not my thing - if I want to run a race in a far off city/location because I want to go there. I'm going to do it on my own dime, not the backs of those that should be benefiting from the donations of others. But that is between the charity, the race and those who participate in the program.

Really enjoyed this Dane. Good luck out there on the roads.

TWINS RUN in our family said...

A simple: "I cheated. I was caught. I was punished." would have sufficed.