I am always intrigued by the how and why of the naming of things. Like in the book "How the States Got Their Shapes" things are always a little mysterious until they aren't anymore. Then it is just "Oh. Because of some random land dispute or a river." The same is true with the naming of most, well, everything.

However, when a brand of running clothing called Only Atoms kept popping up on my social media, I became interested in the name and its etymology.  When I saw they used Neil deGrasse Tyson as their muse, I was interested. Actually, as a big fan of the Notorious NDT, I was more than interested. Next thing you know I had a pair of shorts and a singlet to try out and review. 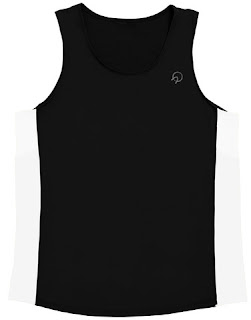 I am a big fan of the singlet for racing.  Given how I perpetually am burning up in even the coolest of temperatures, a sleeveless shirt is the way to go or me.  I would be trying out the Proton Singlet Tank and as the weather in Portland had been quite warm lately, it would be put to the test. Only Atoms makes the claim that "Our premium stretch performance fabric wicks away sweat and keeps you dry and comfortable for maximum performance on your run"  Then again, so does virtually every other company.  So I took it on a couple of 12 mile runs in Forest Park in Portland amongst some others to give it the Dane Sweat Test.  It passed with flying colors.

Without a doubt the product pulled the sweat off my skin. Granted, the way I sweat it could have just saturated it through general principle but I remained as dry as I ever remain on a run. A simple wringing out of the shirt post-run showed how much it had gathered from my pours. It felt a little clingy and maybe a little heavier than other singlets I run and race in but overall the performance was rather stellar. The fact that the shirt is also made of recycled bottles is a nice little touch but only would matter if the shirt performed.  It did, so kudos on being green as well. 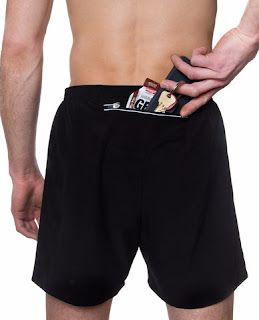 The shorts were what I was most interested in. Only Atoms asked me to test their Velocity Running Shorts which I wasn't exactly keen on. I like my short shorts. I like my split leg. These were neither.  But I was curious and given how well the singlet had worked, thought I would give them a try.

I took the shorts on a variety of different workouts from the trail to the streets.  Even though I was noticing I was wearing a short longer than I wanted, I was surprised that they fit so well.  They are described as having a fit that is "loose but not too loose" and I think that is a perfect description. While I didn't carry anything in the pocket for these runs it was nice to know that there was a zippered one on the back and also a small pocket in the front inner. 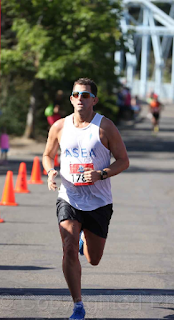 They worked out so well for me I thought that perhaps I should give them the ultimate test: race day. So on an exceedingly hot day (re: I am going to sweat a great deal and give the "Anti-chafing, flat seam stitching" a run for its money) I ran the Windermere Half Marathon in the shorts. While they were drenched within two miles and by the time I was done with the race, I was caked in sweat, I can give the greatest praise I can for any piece of running apparel: I didn't notice them at all.

Because of the logistics of the race and needing to be bused back to the start, I did use the pocket in the back this time to carry my car key.  It was a very spacious pocket but at the same time did not bounce with my key back there. The tie for the shorts could have been a bit longer but that is an easy fix. And even with all the sweating I did, when I got back to the hotel and went to shower, I had not an inch of chafing. That is a huge plus for me.

All and all both the singlet and the shorts were solid products. I would still like to see the company branch out into the shorter shorts and a few more options for men (the women's apparel options are far greater at this point.) One of the selling points is the product can be worn to grab a drink with friends post-run, and perhaps that is true.  Personally, I can never imagine sitting around after a workout in my own filth, but that is because I sweat like it is my job.  Nevertheless, I can see how the shorts at least look snazzy enough that you could grab a burger with buddies post-run and not look too much like you missed the left turn on the oval and ran out of the stadium into the bar.

If you are looking to try out some new running apparel, I would say you won't go wrong with Only Atoms.