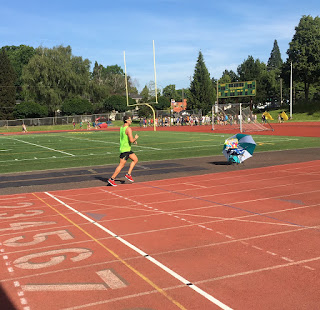 I turned 40 in May and had a plan all set to celebrate my first marathon as Masters run all in place.  Then I ran 40km on my birthday in searing heat, slept in the next day, and missed the registration for the race I had planned to run.  You see, I wanted my first marathon as a 40 year old to be the marathon which would have me completing a marathon in every state. It was also suited to my strengths and I thought I might take a shot at setting a new PR.  Heck of way to run your first marathon as a 40 year old, right?  Well, as that was not to be, I sorta fell into a wary area. I have often said that when you try to make a big deal about a milestone marathon, chances are high it will bite you in the butt. The marathon distance is so challenging that the best-laid plans often get shown the door. As such, I simply couldn't decide what marathon I wanted to be my first as an old guy. Every time I planned one it did not seem "special" enough. 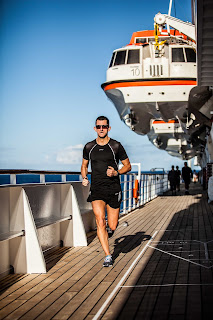 Nearly three (wow, really?) years ago I was a guest speaker on Crystal Cruise Lines trip from Chile to Tahiti with a stop over on Easter Island.  This afforded me an opportunity to set foot on one of the most remote islands in the world. In addition, it excited the child in me to know I would finally get to see the Moai on this most odd of places. Also, on the trip, I was asked to run the fastest marathon that had ever been run around a cruise ship.

I couldn't find any real record of any such feat but went about doing it nonetheless. I don't officially count the distance I did that day as one of my marathons run for a variety of reasons. However, when Crystal Cruise invited me on another cruise and asked me to replicate the feat, this time making it official, I couldn't turn it down.


So, in about three weeks I will be in the middle of the Caribbean, running 97 laps around the Crystal Serenity with official record keepers in tow. I guess technically any time I run will be the fastest ever recorded but I hope to do the record proud. I plan to at least best my own time from 2014 (3:14) and hopefully get under three hours as well.

Not a bad way to celebrate my first marathon as a 40 year old after all.
Posted by Dane at 10:46 AM

I ran a half marathon on a cruise ship a while ago... albeit much slower than you and with much less fanfare :) Thought I'd share my post in case any of my tips can help! http://www.50by25.com/2010/11/fake-race-report-celebrity-century-half-marathon.html

I think I found your blog when searching about running on Easter Island. I did it several times a few weeks ago (unlike you, I was there for several days). Had a similar experience to yours with the horses, and one of the scariest animal encounters I've ever had. But it was magical to run by the moai! Good luck on your official cruise record!