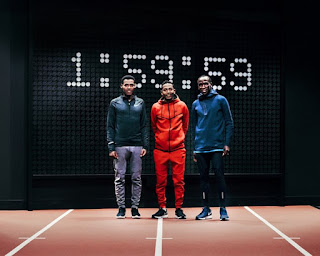 Nearly three years ago I wrote about how a Sub-2 Hour marathon would happen. Following in line with what I thought would occur, the athletes lined up to try and do so this morning in Italy. They almost succeeded.

Saturday’s attempt was engineered by Nike researchers and involved three runners: Kenyan Eliud Kipchoge, with a PR of 2:03:05 and won the gold in Rio last year; Eritrean Zersenay Tadese, the world record holder in the half-marathon; and Ethiopian Lelisa Desisa, a two-time winner of the Boston Marathon.

Because it was put together by Nike and not run during an otherwise free-standing race, immediately it was decried as "not a real race." A publicity stunt. Nothing but a shoe advertisement. And I heard all of these from runners. God damn it, runners, this is why we can't have nice things.  Running supposedly has 30 million people who claim to be runners in the US alone but most couldn't be bothered to even care about this attempt to push the body to the utmost limit. Even so-called ambassadors of the sport, who only pretend to care about running when others are paying their way to 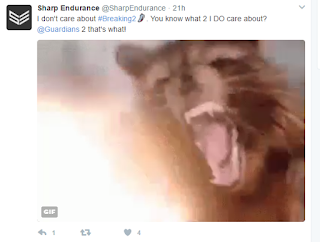 run in prestigious races like Boston or London, couldn't be bothered.

But I am focusing on the negative. I don't mean to but it seemed to be everywhere. Even as I followed along on the live feed on Twitter (the first time I and many others had also done so) there were many who felt the need to hedge their bets. "I don't think they will, and it isn't a real race, but here's hoping they do it." Thanks for the support JogStrap2017!

If you didn't follow it like a runnerd did (myself) the attempt would be done on the nearly flat 1.5-mile Formula One race track in Monza, Italy. There was an elaborate set up with pacers to help keep the cadence, a pace car which helped the pacers, and some fairly decent weather as well (53 degrees, cloudy, and at low elevation, with almost no wind when the race started at 5:45 a.m. local time.)

The race began mostly as planned, with runners keeping fairly close to the necessary 2.51 minutes per kilometer (4:34.5 minutes per mile) pace for the first five of the marathon’s 42.195 kilometers. But by the halfway point, Desisa and then Tadese had fallen off the pace and dropped behind the pace group. The naysayers then were out in full force. The runners falling off didn't have nearly as much to do about "Science" (sic) as it did with the fact that it just didn't happen.

I have often said that 75% of runs go nowhere near as good as we would like. The remaining 25% fall into smaller categories of close to what we like, what we would like, and succeeding what we would like. The chances of one of those days falling on race day are small indeed.  Throw in a longer-distance race and now we are talking infinitesimally small percentages. Chances are good that three days from now, any of the other two men who did not have a "good day" would have been the one nipping at two hours.

But Kipchoge ran alone as the only man with the attempt still possible. With each step he took he was still making history.  It was inspiring and gripping. As I tweeted I noticed I had sweaty palms. With 5km left it was still a reality he would break two hours. Then it wasn't. The last 5km ended up being just too much for Kipchoge to do. 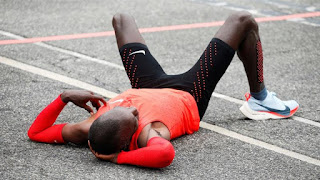 Kipchoge ended up running a 2:00:25, which is less than one second per mile off of the amazing 1:59:XX. Not a world record because he had pacers and was handed liquids. In my opinion, that is ridiculous.  I keep seeing people say he had a pace car and to some extent that is correct.  There was a Tesla in front projecting a light back onto the ground that showed where the runners pacing the competitors had to stay.  Pacers rotated in and out to run with the competitors to try and keep them on target. But the car was far enough in front of the runners to have zero effect on drag. Any runner trying to drag off of another knows that if you fall even a few feet back, the assistance their body gives is almost nil. As for handing the runners drink? - C'mon man. What's the difference between handing them drinks and them grabbing drinks of of a table? 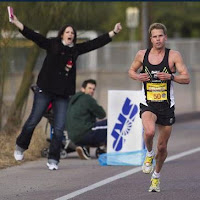 (I am reminded of the story of Josh Cox attempting to break the world record in the 50k by running the Rock N Roll Phoenix Marathon then immediately hitting a nearby track for the extra mileage.  He forgot his sunglasses and had his wife give them to him. But not really. She had to overturn a garbage can, set the sunglasses on top, and then Josh had to grab them off of the top of the box. Because handing them to him would be against the rules. Our sport is stupid sometimes.)

So on the day we celebrated the anniversary of Roger Bannister breaking the 4-minute mile (another highly "manufactured" non-race we seemed to have no problem with - could it be because Roger is white?) we almost saw a human being run 13.1 mph for two hours. That's simply awe-inspiring.

Will this happen in a "real" race? I think so. I always have. I remember in high school, when I ran track for two years and was at best a third stringer on an insanely talented team of a bunch of farm boys, we had an excellent runner named Mac Knapp. He primarily ran the mile and 2 mile and kicked everyone's ass doing so. However, we all wanted him to take down our school's 800 meter record as well. So Mac, who rarely ran this race, decided to run it in one meet. Word got around and a competitor from another school volunteered to pace him through the first loop, simply out of deference and wanting to help.  He paced him well, Mac set the record, and kept it for another decade or so. (I am convinced he would have kept it for forty years if he ever actually trained for the 800, but that is another story.)  Now, that was a real race. But someone had helped him "manufacture" a time he might not have otherwise achieved that day.  Does it make it any less of a time than what he ran?  Not in my eyes. Same with this breaking2 extravaganza.

Call it a Nike commercial if you want. Like somehow there is someone who hasn't heard of Nike but somehow watches live-steaming running endeavors on Twitter. I saw runners, in a sport that has a little too much back-patting for mere completion for my tastes, doing everything possible to run as fast as they possibly can.

Pretending that a race is anything but that is pure fallacy.
Posted by Dane at 3:00 PM

Who cares if he had a pace car and drinks handed to him? He still had to be the one putting one foot in front of the other extremely fast in order to keep up. As long as Nike didn't put wheels and rockets on his shoes to assist him, it shouldn't matter. Absolutely ridiculous attitudes from some people.

It was such an amazing event to watch! !