The Road to Sparta - A Book Review

Dean Karnazes and I are essentially clones.  Also, Dean and I have nothing in common.  Let me explain. 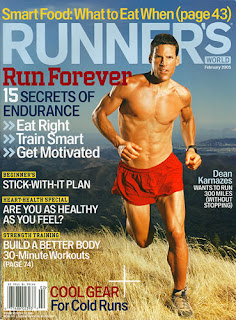 When I first started getting into running I came upon a cover of Runner's World that had Dean on it. Bulky, muscular, tanned, he looked nothing like the other runners usually on the cover.  While I was hardly anywhere close to as chiseled, seeing what looked like a linebacker being lauded for running prowess gave me hope that my 6'1"180 lb frame might be able to do something solid in the sport. I was a fair runner in high school (for the two years I ran) then moved to rugby in college and even amassed a Golden Gloves record of 1-1 in law school (I lost, then won and then said, enough of that.) But running is what I turned to in my mid-20s as a way to stay in shape. It just so happened all the runners I knew at the time weighed about half my body weight.

As fate would have it, I would meet Dean a few months before my 52 Marathons in 52 Weekends journey. That same year Dean, who didn't tell me at the time we met, would be undertaking his 50 marathons in 50 States in 50 days expedition. I had already begun to find my niche when we met but it was amazing to meet him in person.  I also noticed the first of our differences: height. While down the line many casual runners would get the two of us confused (similar first name, long indecipherable last name, many of the same-type running feats) in person no one would mistaken the 5'8'' Dean for the 6'1'' me.  As I later did to runners, he inspired me here. 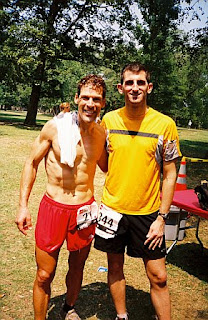 Part of the inspiration for me to do my solo running of the 202-mile American Odyssey Relay was Dean. I had worked briefly for a company that put on these relays and they asked me to use my connection with Dean (which was at the time something I would classify as a step below friends but definitely more than acquaintances) to get him to run their races. That connection between Dean and the company never transpired but in talking with him about it, the idea was planted. I wanted to try one of those myself.

So why in a book review of Dean's latest book am I talking about this? Because, when I read Dean's books I see them as an extension of so many things that I have done and also want to do.  I am highly critical of the way he writes, the stories he tells, the events the tackles etc., because I look at them through my own eyes. Arrogantly or misguidedly, I see us as very similar. Which we are and aren't. 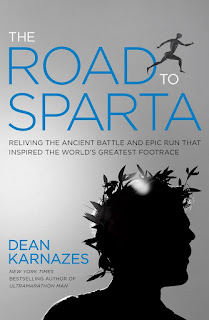 Dean's book The Road to Sparta: Reliving the Ancient Battle and Epic Run That Inspired the World's Greatest Footrace is, essentially, a race report. A race report about his taking on the Sparthalon, a 153 mile ultramarathon race held annually in Greece since 1983, between Athens and Sparta.  That's the simple explanation of both the race and the book. Obviously, there is much more.

Dean gives an account of his own history, both in running and in life. I know most of this history, having read his other books. He doesn't repeat much in the book of his past from the other books or when he does he says it in such a way that makes it fresh. This personal history is where I learned how different Dean and I are.

The crux of this book is how Greek Dean is and how much he wishes to connect with his roots. He mentions his ridiculous calf muscles and how they are present in everyone in his family. (He is also not bragging- his calf muscles are ridiculous.) His running heritage is undeniable and since an early age it was quite clear he was a cut above others when it came to running. He is tied very much to his heritage and the exact places he comes from. With myself, I haven't been a runner from the start and while I love my family, stories have not been passed down through generations. I don't identify as one heritage. I am German, Irish, and English at least. In addition, I have not been a runner who anyone knew was going to do anything of note, even after my first few marathons. So, while Dean and I may have done many of the same things but we undoubtedly diverge here. And it this connection to a people, to a place, to a specific race is what drives this book and is its hook. 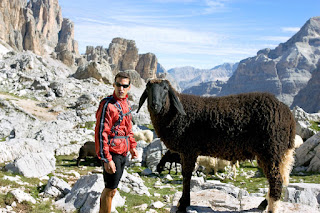 Dean writes with passion. He also writes very entertainingly. In addition, he does a thing that I absolutely love and have found I do in my own writing. He will recount a story that seems a bit far fetched. One might even be inclined to believe it is exaggerated a bit or he tied a few instances together to make for a more cohesive tale (I can totally understand this. You have multiple conversations with many people and for the sake of brevity it is Steve from Poughkeepsie who asked all of those questions.) But then he produces a picture, photographic evidence of the exact thing he was talking about. Every time I see it I smile.

There are many moments where he lays himself bare. He talks about his failings. He mentions internet trolls and dealing with people who just want to snark on his achievements (again, Dean, feel ya there.) Most importantly he takes the reader along on this race and even though you may have zero desire to take this race on, you are rooting for him to complete it nonetheless.


Then, at the end of his race report, he makes this History major and knowledge sponge so excited by talking about the actual and literal history of the events which transpired to set this race up in Greek history thousands of years ago. Again, akin to my second book where I talked about my own experiences but also showed how running has played a major part in momentous occasions throughout history, Dean shows how one runner might have changed the course of the entirety of the human experience. That seems a bit of a reach until he lays it all out in black and white. It truly is hard to argue with his logic. Even if you do, you are engaged nonetheless.

This book is a totally enjoyable read. If you are even a casual runner I think you owe it to yourself to grab a copy. Part history lesson, party inspirational tome, and part tale of Dean's life, it is all rolled into one solid piece of work.
Posted by Dane at 11:46 PM