Book Review: Running with Raven: The Amazing Story of One Man, His Passion, and the Community He Inspired 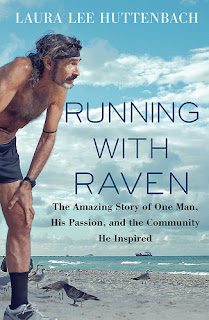 I was asked to read and review the book Running with Raven: The Amazing Story of One Man, His Passion, and the Community He Inspired and I gladly said I would.  I have personally run with Raven a handful of times and was intrigued to learn a great deal more about him than I already knew.

The book chronicled Robert Kraft's life, the man who has run 8 miles on the beaches of Miami, every single day since January 1st, 1975. Well, almost. The first thing I learned which I did not know is that claim is not technically true. I will say he has run every single day since that New Year's day 42 years ago but there is a slight discrepancy to say it has been 8 miles every day. Without ruining the book, I will leave it at that.

When you complete an eight mile run with Raven, he gives you a nickname based on what he learns about you during the run. I first ran with Raven seven years ago where he bestowed upon me my own nickname. I noticed something about him that day which made me really desire to learn more about what makes him tick.  It wasn't the running. It definitely wasn't the streak.  It was something else.

Raven has become a a cultural icon not just because he runs every day. There are actually people who have longer streaks than he does (not many but a few) and for the most part, I think running streaks are a bad idea. Rather, his status comes from the fact he is committed, self-disciplined, generous, aware, wants to building a community, and desires to have others join him. It is these factors which really draw in those who like him most. 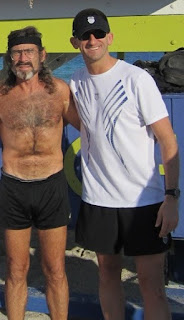 The book details how Raven was probably ripped off by a songwriter for Johnny Cash. You will learn of his strained relationship with both of his parents. Inside the pages, told by the author who has run hundreds of runs with Raven, there is so much more than just a guy who runs every day. He is opinionated, stubborn, and sometimes seems to be tilting against windmills because of a decades old slight, but by and large he is a collector.  Of miles, of newspapers, of trinkets (yes, he is a bit of a hoarder) but most importantly, of stories.

Through debilitating pain, a stint in jail, numerous torn muscles, lacerations, and something like 30 hurricanes, Raven will be on Miami Beach every evening to get in his 8 miles. Someday the streak will end and that is a little sad to think about. Not because the streak is that important per se but rather what it means to Raven.

I hardly consider myself a friend of Raven's; at best an acquaintance.  However, I have told him in our small chats that the streak doesn't define him. He could stop tomorrow and I doubt anyone would be less desiring to go for a run with him when he started it back up. I know it wouldn't diminish my desire.

But Raven really doesn't want to stop.  In fact, it might mean even more to some of the people who run with him than it does him. And in the book you meet many of these people. You learn their stories and how they become intertwined with Raven's. He has officiated weddings on his run, saved numerous lives in the ocean, and watched Miami Beach grow up around him.

You can imagine  a book that talks about a man running the same stretch of beach for 40+ years could get monotonous. But in actuality, it doesn't focus much on the run per se.  Sure it details the particulars of the course he runs, and highlights as variety of the runs he has done because a variety of things have happened on that run. Yet, the book never drags, due in part to the subject matter and in part to the excellent writing by the author, Laura Lee Huttenbach, who I have met myself on occasion.

One assuredly does not need to be a runner to enjoy reading this book. They just have to have a heart. And if you go run with Raven, you will also have a nickname.
Posted by Dane at 3:40 PM