In case you missed the story about the blind basketball player HERE, allow me to sum it up for you.

First of all, it is not as amazing as it sounds at first blush. The player in question, Matt Steven, missing both of his eyes, does not actually play in his high school basketball games. Let's just get that out of the way first off. Having said that, prepare to be amazed anyway.

In a charity tournament just last month in and around Upper Darby, PA where Matt goes to school at St. Laurence CY, the coach of the team (and Matt's older brother) Joe, asked the referees and other teams if it would be if Matt (you know, the one who cannot see) could shoot all of the team's free throws. They all agreed. 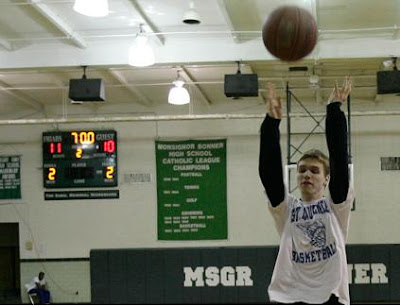 I will admit my knowledge of basketball rules is not as in depth as it could be. I don't know if a team can have a designated shooter. It seems highly unlikely since you could always put in your best free throw guy whenever anyone was fouled. But if the other teams and the referees agreed to it, then it must be allowed. So, let the magic unfold.

As Rick Reilly of ESPN the Magazine reports, "The first game, Matt came in and -- to the crowd's shock -- made his first two. He was escorted back to the bench, where he grinned as if he had just kissed the head cheerleader. He was 4-for-8 that day."

Matt claims he wishes to be treated normal. Unfortunately, the reality is that he is not normal. Born with two permanently detached retinas, and eyes that were removed when he was in middle school, Matt obviously has some serious disadvantages in life. However, after begging to be taken out of a school for the blind, Matt was allowed to attend a regular school and join the basketball team. He was just happy to be on the team, shooting free throws whenever he got the chances, making about half of them. Or about the same percentage that Shaq makes with two good eyeballs and about $300 million dollars in NBA earnings over his career to do things like, make free throws.

How does Matt "see" the rim? Well, his brother hits the backboard with a cane. Matt then uses the sound to aim. And then shoot away.

Reilly continues. "Which brings us to Matt's moment in that second game. He'd missed his first six free throws, and St. Laurence was down eight to St. Philomena. Then a full-court press pulled the team to within one with 10 seconds left. That's when St. Laurence's best shooter -- 6'4" senior Ryan Haley -- was fouled in the lane."

"And Haley really was going to shoot them, until he looked over at Matt on the bench. "And I thought, He comes to every game, he never misses a practice, he cheers us on. He deserves a shot. I mean, it's everyone's dream to make those shots."

Yep, Matt came in with the game on the line. BAM. He makes the first one and the crowd goes insane. BAM. Second one finds nothing but the bottom of the net. When St. Phil's desperation shot misses, Matt becomes an instant legend.