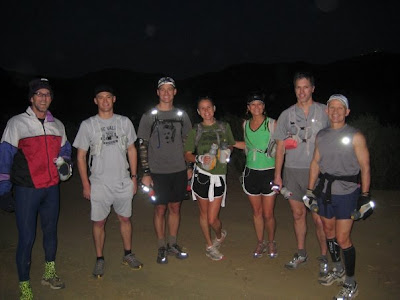 When my friend Jimmy found out I was going to be in Los Angeles he asked me if i wanted to join him for "some trail running". I use the quotes as Jimmy's runs usually begin at like 5 AM and encompass 30 miles just for craps and giggles. He didn't disappoint. It appears Jimmy and his friend Eric had been planning to run the entire length of the Back Bone Trail in the Santa Monica mountains. ~68 miles. For fun. In one day. Assisted by Jimmy's lovely wife, Kate, as well as friends and family of both him and Eric, they would begin running on this trail in the pitch black of the morning and finish in the pitch black of the night. I told Jimmy I would do what I could to join them. At first, my intention was to run with them in the early morning. However, getting to where I needed to be to run with them and then to engagements I had later on in the day would have been nearly impossible. So the plans changed and I decided I would join them for two separate sections near the end of their day. I was hoping I would be able to get them through some tough spots and get a nice little workout in myself. When I showed up around 4 PM, Jimmy and Eric had already covered 40 miles with 4,700 feet of elevation gain and 4,820 feet of elevation loss. At various points during these first 40 miles they had a network of runners who drove from all over California to run with them. After refueling they set out for the section which Jimmy and Eric said they had been dreading all day - the section then entitled - Las Virgenes Road / Piuma Road to Stunt Road. With 310 loss of elevation and 2240 gain right after the warmest part of the day, and after putting in a marathon and a half, the guys were in need of some enthusiasm. Fortunately, for the first mile or so, they had a few other runners with them. All training for a 50k, 50 miler or 100 mile race, the runners needed just another mile before they turned around to call it a day. I snapped a picture of the group before they split. 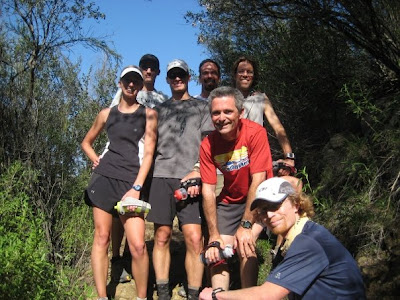 After that it was just me and the two boys. Jimmy, who is as talkative as I am, led the charge up the hills. However, I could tell he was beat as he was quiet as a church mouse. So I told fart jokes, regaled Eric with stories of my awesomeness and anything else I could think to get their spirits and energy going. We stopped at once place which the chaps frequent and snapped a nice little mirror shots. This would be one of the least offensive pictures we took. Guys know how to have fun. 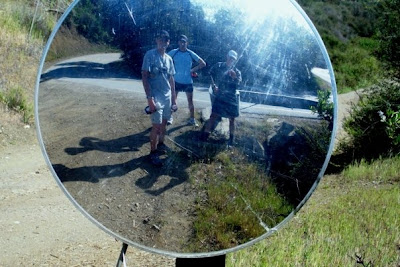 We started going up up up into the hills again and a little over 2 hours after we started this 7.3 mile section of the course we were done. And seemingly so was Jimmy. I tried rallying the troops by showing them my fantastic heel click maneuver. Eric liked it. 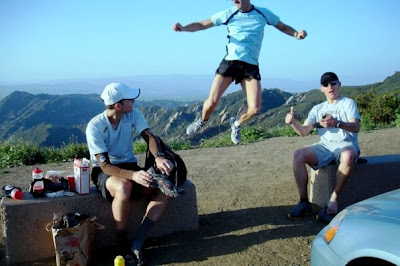 But I knew they needed more from me. And that was when I donned the Speedo. 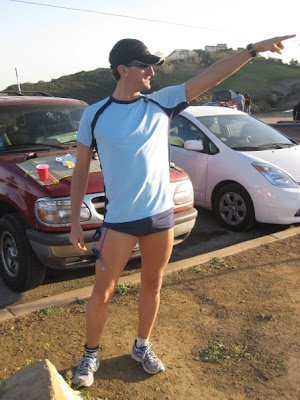 The hows and why of the Speedo in my possession needn't be answered. All you need to know is that I spent the next 5 miles running on trails in a uncomfortable "hugging" phase. That is what you do for friends. And some good running it was. The combo of me making an ass of myself and a serious section of downhill got Jimmy up and going again and Eric laughing. Jimmy and I both excel at downhill running and were thoroughly enjoying ourselves. As Eric would approach us he would comment on how we bound down the hills like bunnies. One exchange went like this as Jimmy, I and Eric went down the trail single-file. Eric: "Is Jimmy talking on the phone while running downhill at breakneck speed on a trail?" Dane: "Sure is." Eric: "Wait. Are you texting?!" Dane: "Yep." Eric: "Who?!" Dane: "Jimmy. To tell him to get off the phone and run." With this five mile section done in well under an hour (!) and nearly 1800 feet of elevation loss behind us, I thought I was done for the day. I mean, afterall, one can only do so much in googles. 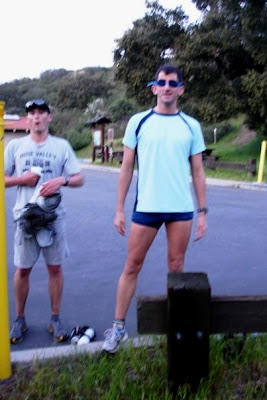 However, with Jimmy's wife Kate joining everyone for the final 13 miles, as well as two other runners (Gareth and Dominic), I couldn't pass up the party. Having never run more than 21 miles in my life which did not include a t-shirt, bagels and a non-precious medal, I figured I might as well join them for my longest training run ever. I only have 8 straight weekly marathons coming up, this would be wise to throw one in that doesn't count. The sun set quickly and the six intrepid adventures set out. Kate and I had been presented with the Torches of Odin from Gareth and we apologize if our use of those flashlight crashed any plane in the SoCal area. In reality, these flashlights were pathetic. (Note the immense illumination on Kate's thigh.) 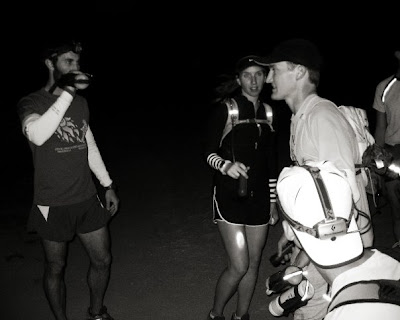 From Gareth: "I used one of the flashlights to run .5 miles to my car, and almost died 3 times, so I don't know how you and Kate managed 13+ miles of trail." Because we are ninjas, Gareth. Because we are ninjas. The darkness thickened and the runners grew weary. The last 13 miles dragged on for me so I cannot even imagine what it was like for jimmy and Eric. However, they were unbelievable troopers and one would have never guessed they had been moving for 14 hours or so. We grabbed one last photo at Eagle Rock before the final stretch of running. Eric was sad he had nothing with reflective gear on. Gareth is apparently Tony Stark. 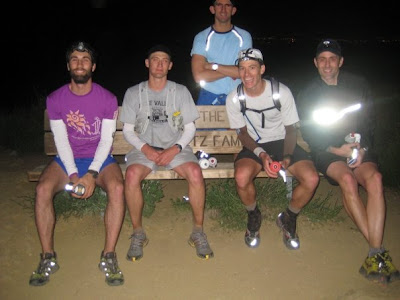 A few miles later and Jimmy and Eric had conquered the trail. The final 13.3 miles took about 2:30 which is just amazing given the fact that there was 1725 loss and1125 gain during that section and these guys had just run 56 miles! Well-deserved applause was handed out. 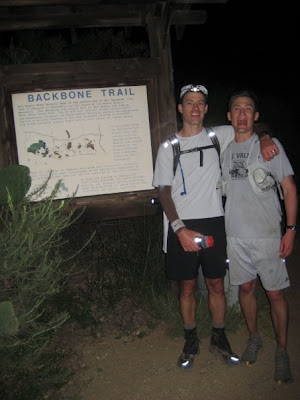 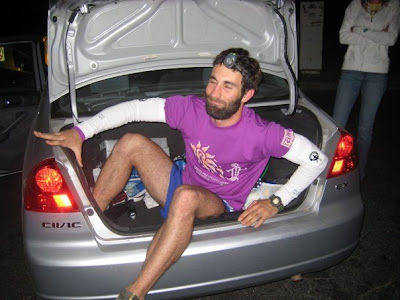 After a few miles of incredulousness and jokes about our way way backseat passenger, the exhaustion set in and everyone got quiet. About 45 seconds of silence was punctured when someone said: "Did everyone else just forget we have a human in the trunk?" The raucous laughter signified we all had. 68 miles, 16,000 total feet of climbing and some dirty pictures which can never see the light of day. Good job Jimmy and Eric!
Posted by Dane at 5:12 PM

AWESOME recap Dane. It was like I was there. Oh, wait...

I will forever remember the Torches Of Odin reference.

And yes, Dane, you and Kate ARE Ninjas.

I look forward to our next run and another opportunity to purchase equally inefficient equipment!

Sounds like a great run! I have run on the Santa Monica mountains and some of the inclines are pretty serious. Great job to all for running so far on these trails!

This is a really great recap of your training run. It was like I was there hanging out with you and your buddies. Being silly and hanging out with friends is what it is all about sometimes. Maybe you don't have to post the speedo picture next time though.

While I'm glad to call you a team mate, you are clearly a ninja and not-so-secretly more and more crazy each post I read. Fact!

When In Roam said...

Hmmm...no comments on the Speedo. Your friends are way too nice!