It is always nice to have people say nice things about you. That almost goes without typing/saying (but, hey, I needed an opener). But when those people take the time to actually type it to you (or better yet write it in a letter- go ahead and surprise someone you care about with a letter this week), that makes you feel even more special. When they take the time to type it to you when they are surrounded by enemy fire in Iraq, well, that one means a little more than most.

The other week I received the following message:

I just wanted to say that I've always enjoyed reading your blog. I'm currently on my second tour in Iraq, so I'm forced to live vicariously through other runners until I get back. Thankfully you race so much, I've been well entertained for the past 7 months.

I was taking a few photos for some running friends, and figured I'd throw you in the mix. Even though we've never met, I'm a strong believer in charity running, so I thought I'd shoot you a motivational snapshot. I'm no photographer; I'll apologize now for the blurry picture. It looked good on the camera, and of course I probably won't have the opportunity to take another.

Good luck in Pittsburgh! I hope to see you in a race some day, although at that time I'll be cheering for myself. I'll need it, your PR has a good 6 minutes on mine.

I was extremely moved by this particular email and SGT Kysela and I have exchanged some correspondence. I learned that he is a Chicago Bears fan like me and ran his first marathon a full HOUR faster than mine in a 3:12! He then set his current PR of 2:57 on a tough Country Music Marathon course just a few months later. After he finishes his second tour his marathoning return should be at the end of the year, at the Vegas Marathon (Dec 6). Here he will be raising money for the Wounded Warriors Project in honor of one of his good friends who was wounded on his last deployment.

I can only hope that he gets home safely and we have a chance to go for a run together real soon. Thanks for all you do, SGT! 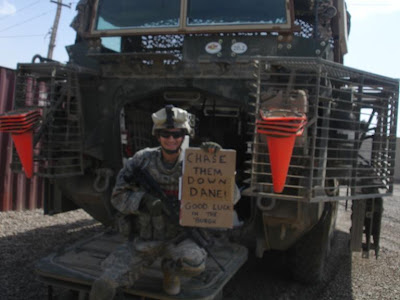 That is incredibly cool. Hope you'll have a copy of that photo on you when you run in Pittsburgh!

wow - this brought tears to my eyes, thank you for sharing this with us, Dane and more importantly, SGT Kysela, if you are reading this, THANK YOU for your bravery and service to this wonderful country of ours!

Anytime we can honor our troops is a patriotic moment. It just goes to show we need to make a concerted effort to keep those abroad in connection with us here in the states, to let them know they are not forgotten, for they have not forgotten us.

Thank you for sharing this! My brother did two tours in Iraq, and I think it's great to support our soldiers whenever we can. Thank you SGT Kysela!

That is so touching. I am sure you feel incredibly honored that you are providing inspiration to those that serve in honor of our country and protect our freedom.

Thanks for sharing with us.

I think this is awesome and that photo is awesome. Awesomeness all over.

Before Dan was deployed he was running in the same Wednesday night group as I. He's a cool guy and I hope he rejoins the group when he returns to the States. :)

Some pics of him and others in our group running can be found here.

Dan's picture is now my pc background photo. I'll leave it up until he comes home. I am lucky enough to run with him on the track in Pittsburgh. I need someone young and fast to chase around the track so I hope he gets home soon

wow, that's awesome! THANK YOU SGT Kysela for serving and protecting us!

Nice Stryker you are posing in front of SGT Kysela. If you can SGT, try running as much as possible while in country. At one point I was at a small outpost, so I was only able to run a couple of miles at a time and had a very erratic schedule which made it difficult to get runs in too. However, when my unit was moved to a larger base there was a 10 mile loop I could run! Even though there were no real hills to train on, I found that my running had significantly improved when I returned to the states even though I was only able to run about 4 times a week. I think it had something to do with the low quality of air there which made running and breathing back here even easier. Hope you can get some runs in!

When enjoying a beer I try to dedicate it to the men and women overseas as much as possible but now I will start dedicating my long runs to you and the other men and women wishing to run races back here! Thanks for your service!

I was absolutely flattered by your post Dane; thank you for taking time out of your day to write about me.

I'll be looking forward to some day in the future when we get a chance to run together.

Dane - I finally got around to reading your email from Iraq. What an honour! Have you sent this fine soldier your book yet?