In my running, I have had the great fortune to be in touch with some of the wonderful and historic names of this sport. Two years ago, I met and spoke with Jack Fultz, the 1976 Boston Marathon winner.  When Jack won Boston, his time was 2:20:19.  This was the slowest winning time at Boston in 14 years.  In fact, the year before Bill Rodgers set the course record with a 2:09:55.

But believe me, this is not putting Jack down at all.  You see, while details differ on the exact temperature that day, it is known to have been AT LEAST 91 degrees.  In a race that was called the Run for the Hoses, where no official aid stations were available for any runners (boy, that makes you shut your mouth when they don’t have your favorite flavor of energy gel at an out of the way marathon, now doesn’t it) Jack’s 2:20 was amazing. 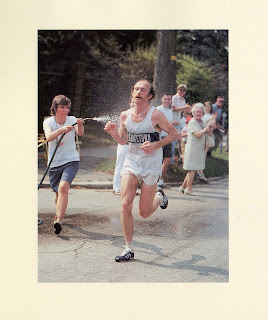 Well, Jack hails from Franklin, PA – just 20 miles from my hometown - the site of the Drake Well Marathon and Half-Marathon.  For the 2010 editions of these races, both male and female winners will receive hand-signed copies of the picture which fully captures the running for the hoses Jack did that day on the way to his historic win (seen above.)

I am proud to be able to offer this one of a kind gift to our runners and give them that extra something special to run hard for that weekend.  It is also the Drake Well Marathons and Half Marathon's pleasure  to help educate runners about the glorious past our sport has and let them know where we have been so we can fully understand where we are going.

Registration is open now for the Drake Well Marathon and Half-Marathon.  Do not miss this wonderful opportunity to run in the Valley that Changed the World!
Posted by Dane at 1:47 AM

I want a hand-signed copy of the picture! Can they be purchased??