The upcoming Drake Well Marathon and Half-Marathon (93 days away) is going to be a blast.  With one year under the belt of the organizers, many of the few snafus will be eliminated and they promise it will not be anywhere close to as humid as it was last year. Mostly because last year was the most humid day in the history of the planet anywhere, ever.  Seriously, it was ridiculous and cannot possibly be repeated.  So there you go. 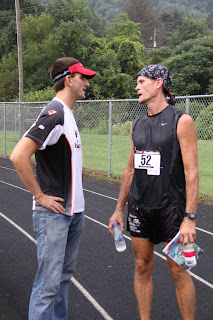 Me and 2nd overall runner, Dave Terrill looking as if he had just jumped in Oil Creek.
However, as registrations roll in, a plethora  of great stories are popping up.  One particular is about one of my very good friends in high school, Joe Thompson.  Joe was not only a sprinter with speed I could not even begin to fathom but was also an accomplished actor and singer.  Like so many from this small town nestled in the Valley that Changed the World (a rather inordinate number of people, actually), Joe has scattered to the four winds and made a name for himself as a singer in New York City. 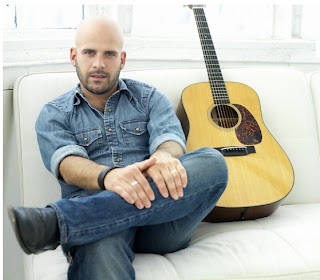 Photo by Peter Hurley of Joe and his mistress.

I happened to get a copy of his second album, Yankee Twang, from Joe personally in the mail the other day.  Filled with music he described  as Country Folk N Roll (an awesome term, by the way) I was intrigued but did not know if it would be my kind of music.  I popped in the cd and began working on a few emails.  Soon my foot was tapping and my head bobbing.  About two or three songs in I stopped and thought: “Wait. This is Joe! Holy crap!”  I had totally forgotten I was listening to my ole buddy with whom who I had demolished many a potential wooden coat hanger in shop class as my father had completely not passed down his wood carving skills to me.  I think Joe's cota hangers were purdy.  but here he was crooning away and sounding very good.  I should not have been surprised.  I knew he was extremely talented but here was even more proof.  I particularly liked "When it Rains, it Pours" and "Blue New York".


Joe's cd release performance is on June 17th.  However,you can get it on itunes, cdbaby and his own website on June 1st!  If you like good music, regardless of the genre, I would suggest you check it out.  Then come join Joe at the Drake Well Half Marathon where he will be running his first half-marathon ever.

And if you are not a wussy sprinter, you could maybe even do the full marathon.  (Had to get a dig in there, Joe!)
Posted by Dane at 10:39 AM