I always think the year is young or has just begun until my birthday hits.  Even though it is the 151st day of the year, I think, no, the year is still in its infancy. Once the day has passed, my thought process changes dramatically. Summer is two steps away, the year is already beginning its steady creep towards December and I realize I have to plan for the Fourth of July and Labor Day parties.

This year, however, I will be celebrating my birthday by running the Stillwater Marathon in Stillwater, MN.

While technically, the race is the day before my birthday this is close enough for me to continue a tradition I started in 2008 of running my age in miles on (or about) my birthday.  In 2008, I helped direct a 4 mile race, ran the course picking up the milers, went on a long run with the Race Director, drove 15 miles to give a talk at a gym, helped direct an 8k, and then ran the 8k to get my 32 miles in.  Last year, I was invited to join the panel at the Rock N Roll Marathon in San Diego (including the likes of Frank Shorter and Bart Yasso to name a few).  Then I ran 7 miles from the start of the race backwards to get to the starting line right when the race started, ran the marathon and got my 33 miles in on my 33 birthday. 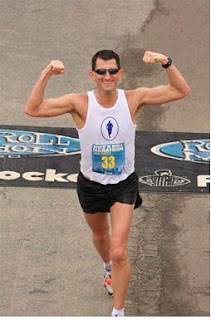 I was trying to remember why I had not done something similar for my 31sy birthday and then I realized I was attempting my first 100 miler two days after.  And it was also like 97 degrees in DC.

You may recall last year I was the 3:10 pace group leader for Stillwater and then more or less became the de facto leading women's pacer after about 22 miles. 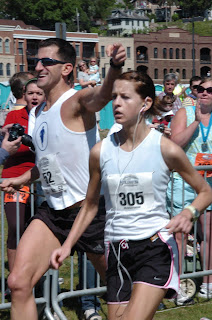 Well, I am happy to once again be in the birthplace of Minnesota as this weekend approaches where I am going to be quite busy as the featured speaker deluxe! The race day itself promises to be a warm one which will obviously had somewhat of a challenge but since it snowed yesterday here in Salt Lake (I am NOT kidding), I won't mind a little sunshine.  The plan this year is to run the marathon and then head back out on the course for four miles, cheering and encouraging the runners still there.  Then I will turn around again to finish under the banner to get my eight extra miles for 34 for for the day.  Hard to believe I change age groups next year.

So if you are in the are and wish to experience one of the many races Stillwater is offering (full, half, 20 miler and 12k!), or just take part in some of the fantastic post-race festivities.  Hope to see you there!
Posted by Dane at 11:48 AM

Have a great Birthday run! It does get harder each year. I started that tradition this past year and because of injuries etc. I postponed my bday run till this spring....50 miles. It is difficult to get up for the bday run when you are looking at 51 miles, I may need to adjust to 50 city blocks...LOL

We could alwasy be cool Europeans and switch to kilometers!