For 33.5 years of my life, I knew where Hawaii was.  Being a geek for information, I knew when it was admitted to the Union, its state bird, and how Mauna Kea is technically the tallest mountain in the world (if measured from the sea floor.)  By virtue of being a history major, Pearl Harbor’s significance was burned into my memory.  But I had never actually been there.

That changed in December of last year when I touched down in Hawaii and took part in the Honolulu Marathon, knocking another state off in the process.  This time, however, I do not need to wait long for the next trip as I have been asked to be the featured speaker for the 40th anniversary of the Maui Marathon to be held September 19th, 2010. I graciously accepted. (Insert “Duh” comment in your head right…now.)

Starting with the sunrise over the Haleakala volcanic crater and finishing at the world famous Kaanapali Resort at Whalers Village I expect to enjoy the beautiful views of the Pacific Ocean almost from start to finish. 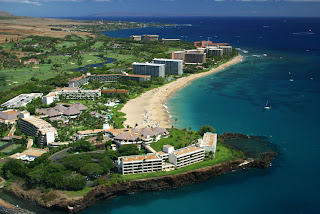 Sure it will be warm and humid (it is Hawaii) but with winning times well under 2:20 in its past, apparently it is not the slowest race out there. The 5:30 AM start will be a big help as well. And for a race called “the Best Run in Paradise” by Runner’s World, registration is within the very doable price range of $75 for the full if done before October 1st (even less for military and members of the club who put the race on.)

I hope you will join me in running in paradise.  This might be the first time ever I wouldn’t mind if my plane was a little late in leaving.
Posted by Dane at 1:55 AM

Sounds awesome! But if the race is September 19th, how can I still register until October 1st? :)