Last year I was reading The Perfect Mile about Roger Bannister's (and others) quest to be the first person to to ever run under 4 minutes for a mile.  While very good high school runners do that every so often, and very good college runners do it on a routine basis these days, it was at one time considered impossible for anyone to do so.  And if they did, they would assuredly die from the effort.  How's that for a deterrent? This always reminds me of those famous quotes that say guitar music is on the way out and the Beatles are a fad or that the president of IBM only sees a worldwide market of maybe 5 computers.  The lesson here is, never be caught giving a quote ever, apparently.  But I digress.

In the book, Bannister, who was in school to become a doctor, did incredible amounts of tests on his own body to see how certain workouts affected him.  He did numerous tests using a veritable plethora of different methods of training as well.  One passage that stuck with me was how he discovered that a running speed that exhausted him after about 8 minutes when he inhaled "normal" room air (which contains about 21% oxygen) could be sustained for 16 minutes or more when he inhaled oxygen-enriched air (60-100% oxygen content) even at his breakneck pace, increasing the oxygen content to his lungs allowed him to double his effort.  Furthermore, he also noted that switching from room air to oxygen-enriched air immediately reduced the sensation of fatigue when running at high intensity. 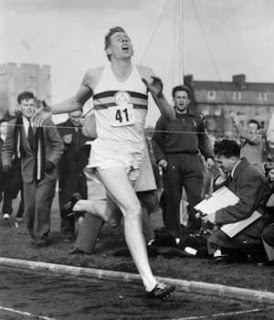 This stuck with me because having recently moved to Salt Lake City and its much higher elevation that my previous home of Washington DC, I was curious how the thinner air would affect my training.  Even though SLC is hardly sitting on the top of Mt. Everest, with my constant travel schedule traveling I could definitely feel the effects.

What really sent this into overdrive was how this year, after finishing the major training for my 202 mile run, I began to work in far more speed workouts than I had done, maybe ever.  I knew that most of my workouts and races had previously been of the aerobic nature, or "with air." I would soon be getting to experience anaerobic exercise with all of my races becoming of the shorter variety.  With 9 half-marathons, a sprint triathlon, a 5k and 15k (to name just a few races) under my belt this year, I was creating the perfect testing ground to see if sir Roger was right.

Fortunately me for me, while I was doing this training, I had been introduced to a product called Oxygen 4 Energy which contains 90-95% oxygen.

In my own personal experiments (and really, when it comes to our own performance, these are the only ones which really matter) I found I was able to work harder and recover faster when I used Oxygen than when I did not.  I used it at the beginning and end of workouts, immediately prior to races and in both running and swimming events. I was extremely surprised how well it worked.  Sure, I trusted Bannister since he would have lapped me in a mile (or close enough that it would have been embarrassing) but what really made the deciding factor was real-life testing.

As such,I am happy to announce I will be partnering with Oxygen and seeing how far it can take me on my quest to continue to push my boundaries.  I invite you to go to their website, check out the product for yourself and see if it helps you as well.