01.09.10    Mississippi Blues Marathon (2:59:02; 17th place overall)
This marathon had two things important about.  First I reinstated my Charity Chaser role so I needed to run fast and pass as many people as possible. Second, this would be the first time ever I would be doing a Saturday/Sunday marathon combo.  As such it was a complete unknown to me.  The X-factor for this particular race was the weather. It was COLD. 14 degrees at the start of the race cold. I think that helped me run fast because I simply wanted to get inside and get warm!
Full Recap

01.10.10    First Light Marathon (3:17:37; 21st overall)
With my second marathon in less than 24 hours, I did not know what to expect.  However, I said I wanted to run a 3:17xx to knock off my first ever 3:17 and I kept to that throughout the race. I also had the pleasure of helping the eventual women’s winner get to the finish.  Running in Mobile for the race and organization (L’Arche) which was the beneficiary of all my fundraising efforts in 2006 was a special treat as well. Full Recap


02.21.10    Pasadena Marathon (3:10:41; 18th overall)
After getting the flu just 72 hours before the Rocky Raccoon Marathon which caused me to DNF at mile 33, I quickly found another 50 mile race the next weekend prior to this race (supposed to be a rest weekend) and was fortunate enough to get a course record and a win.  I was particularly fired up for this race because of events completely non-related to running and probably ran faster than I should have. Full Recap 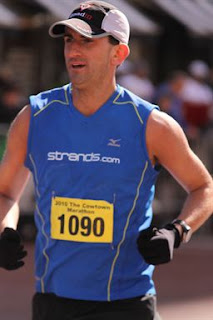 02.27.10    Cowtown Marathon (3:21:15; 56th overall)
Continuing both my quest to run intelligently and knock off never-before-run times, I decided to run a 3:21 at Cowtown.  Lingering soreness in my legs from the two 50 mile races made sure I went no faster. Full Recap

04.11.10    St. Louis Marathon (3:14:06; 75th overall)
After a month of nothing but half marathons, I went into my second 100 mile attempt hoping to get one final great race prior to the 202 miler. I did not get such a race.  50 miles in I had to drop to that option and call it a day.  Here, two weeks later, I was just getting my final tune-up run in.  The sun really began to wilt runners on this day and I was happy to get done when I did. Full Recap

05.30.10    Stillwater Marathon (3:24:26; 19th overall)
One month after the 202 miler and I was ready for my first marathon back.  Also, as this was my birthday run (one day early) the plan was to run 4 miles to the start of the marathon, run it, and then backtrack 2 miles on the race before finishing again for 34 miles on the day for my 34th birthday.  However, very warm temperatures had me calling it a morning after the initial 4 plus the race and only after cooling down and flying back to Salt Lake did I tack on the other 4 miles before midnight to complete the task. Full Recap

06.06.10    Lewis & Clark Marathon (3:27:27; 7th overall)
One week after a tough day of racing I made an impromptu drive to get my first marathon run in Montana.  Unfortunately, I made some wrong turns on the race course and ran much closer to 29 miles than I did 26.2. At high elevation and extra 20 minutes of running in the wrong direction is not fun.  Good thing it was gorgeous in Big Sky Country!    Full Recap

09.19.10    Maui Marathon (3:52:38; 80th overall)
After taking one of the longest breaks from marathoning I had ever had since I started running them (I did run 9 half marathons during this "break") I was looking forward to the Maui Marathon. Unusually high temperatures and rampant humidity, even for Maui, almost had me DNFing my first marathon ever.  I stumbled across the finish taking 2 hours to do the last 8 miles and then spent another hour laying and/or puking on the beautiful lawn of my hotel which just happened to be the finish line.  Almost thought this might be my last marathon.  Full Recap


10.10.10    Prairie Fire Wichita Marathon (3:07:46; 13th overall)
Sometimes you are lucky to be part of an event in its beginning stages where you can see great potential and are already in the middle of a well put on race.  That happened here in Wichita.  Also met some people here who are probably going to affect the rest of my life. Not too bad for my first ever visit to the state of Kansas. Full Recap

10.16.10    Kansas City Marathon (3:09:46; 35th overall)
On a hilly course I was happy to eke out another Boston Qualifying time even after numerous restroom breaks had taken serious minutes off my time. A busy day that had me then driving to Lawrence, Kansas, then back and then flying to Denver to cheer on friends running the Denver Marathon the next day had me utterly zapped come nightfall.  But had a home grilled filet mignon at the house of a friend to end the day.  Pretty much the best way one could possibly end a marathon day! Full Recap

10.23.10    Running for the Bay Marathon (3:15:53; 6th overall)
Much to my chagrin, even late October is hot and humid in Florida.  But when you get to pick up the lead female runner and help her to victory, in her first marathon ever, on her birthday, chances are it will remain one of your favorite racing moments ever. Full Recap

10.31.10    Marine Corps Marathon (3:09:14; 310th overall)
I was hoping to eliminate the final time I have never run between 3:00 and 3:30 but running a nice and evenly paced 3:02 at the only race I had ever run four separate times.  However, I completely misjudged where the bag drop-off was and raced 2 solid miles in a complete huff, with some of that happening after the gun had fired.  I kept that 3:02 pace for 3 hours and 2 minutes of running.  Too bad that put me at mile 24 where I promptly fell apart. Eked out another Boston Qualifying time though.    Full Recap

12.05.10    Dallas White Rock Marathon (3:02:47; 81st overall)
With cold temperatures and the beginnings of one of the sorest throats I have ever had, the Dallas White Rock Marathon did not look like the place where I would get that elusive 3:02.  As fate would have it, I was lucky enough to push through and finally nab it in spite of a previous week which included family illness, personal strife and me being in a car accident which totaled my beloved car. You just never know when it will be your day.Full Recap 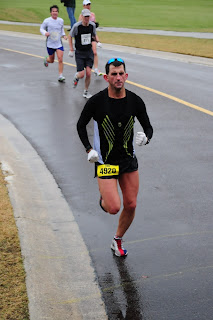 Having lived on the East Coast for all but three years of my life it is funny how many east coast states I have never run a marathon in.  We can now count South Carolina off of that list.  With a sore throat that had moved to feverish temperatures, hallucinations and a head cold, the time I ran on this course, in pelting rain, remains one of my best marathon finishes ever. Full Recap

This year marked the first time since 2003 when I did not set a new personal best.  That streak coming to an end stings a little.  But I also ended my streak of attending at least one home Penn State game as well and that streak started 17 years ago in 1994.  Sometimes things must simply come to an end.  In hindsight, this was a year of incredible success, unthinkable lows and unfathomable highs. And to be completely frank, I am not even talking about running.

I am ready for the excitement that 2011 will be bringing me. I am taking on a new sport (triathlon), potentially moving to a new city (a couple of options are on the table) and looking for wind to blow some sails in good directions. I will plan and coordinate and have it all figured out – and then have it promptly blown to smithereens by Martin Luther King Jr Day at the latest.  And that is half of the fun.

Wish you the best for 2011 in all aspects of your life! Thank you for everything you do for us runners! :)

Thanks for another great year of commentary, insight, and wisecracking, Dane. Appreciate your keeping the conversation on running and continuing to inspire us all.
Have a safe and happy holiday season !
Andrea of FV

One wouldn’t think that just gaining a little bit of first-hand knowledge about the challenging and sometimes unforgiving sport of marathon running would translate into a better understanding of people. In my limited experience, however, this is exactly the case. Take you, Dane. It is easy to see that you are special. Anyone can quickly observe, after all, a wake of excited, hopeful and encouraged runners that lightly scamper off, elevated and each a bit better for having just met you at a brief stop-by at an Expo. Little do many know at that moment, however, that your far-reaching impact extends beyond the Expo happy afterglow. Through your words, written and spoken, and of course the reliability of your kind and generous actions, you make our world such a better place because you inspire people to simply be better. I believe I am not the only one who gets this at a deeper level after maturing somewhat as a runner, through repeated personal attempts to tackle and conquer in this great sport. Yay for rare, true and sharing souls like you, Dane. Know that your efforts engender lasting goodness amongst runners, people you obviously so highly respect. I hope that 2011 brings all the happiness, good health and success that you deserve.