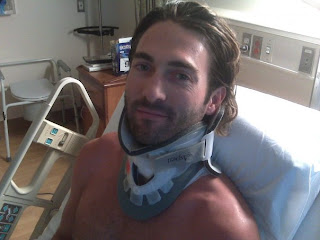 
How close were you to being paralyzed?

After surgery, I was told the following by an attending surgeon fellow, which quickly brought to my attention how lucky I really was:
•    Over 90% of the people who incur the same C-4 injury suffer permanent neurological impairment (and are paralyzed from the waist down or worse)
•    Over 50% of the people who suffer such permanent neurological impairment are paraplegic (paralyzed from the neck down) for the rest of their lives
•    A great majority of the people who become paraplegic as a result of such an injury die within a few years of the injury due to complications and/or depression.

Were you a runner prior to the injury?

I was a "distance runner" in high school, both in track and XC, and was even one of my school's track captains my senior year. It's kind of funny to consider what somethat that age generally calls "distance" - 5K doesn't really even get me warmed up now. :)  I had too much fun my freshman year in college to focus on running much, and became a dad my sophomore year in college, so I never got a chance to compete at all collegiately. I ran, but never with very much focus or conviction or goals, after college, but it wasn't really until 2005, when I moved to Southern California, that I started to get involved with competitive running again.


What were your PRs?

What races have you run since the injury (with times)?

How did you get hooked up with the Christopher Reeve Foundation?

After my accident, I had developed somewhat of a case of survivor's guilt - knowing that there are so many people out there who weren't as fortunate as me after similar accidents and/or injuries bothered me for a long time. As I'm sure you can imagine, "Why me?" was a phrase that commonly circulated through my mind. About 6 months after my injury, I happened to randomly meet someone who was intimately involved with a group called "Life Rolls On", which is a nonprofit created by Jesse Billauer, a former surfer who broke his neck while surfing and is now paraplegic. LRO puts on multiple events per year on both coasts associated with their "They Will Surf Again" movement, which helps the paraplegic actually surf once again with the help of multiple volunteers.


I moved away from California shortly thereafter, and consequently was unable to be involved myself in LRO, but when I later heard that LRO had united with the Christopher & Dana Reeve Foundation, I wanted to know why, and I wanted to be involved somehow. What I discovered is that CDRF actually has a team, TEAM REEVE, who runs (or swims, or cycles, or all three) to raise funds to assist CDRF in funding spinal cord injury (SCI) research as well as quality of life grants. When I discovered the details, I was hooked. I made a friend at CDRF, Leigh Alspach, and I told her as early as February 2010 that I wanted to run the NYC Marathon in November 2010. And, as they say, the rest is history...sub-3 hour marathon and over $5,300 raised later.

I thought about asking Ryon what his plans were for the future.  Then I realized that not even the sky is the limit for him.  Here's wishing nothing but the best for him and that you too see what can be achieved when you Ignore The Impossible.
Posted by Dane at 9:29 PM

A very inspiring story. Thanks for putting it up.