New and Different Races in 2011

For me, 2011's athletic endeavors plan is to try things new and different, and for the most part, on the shorter side of things. Beginning 2010 with some 50 milers in prep for the 202 miler in April and then ending the year with my 6 Hour Run in San Francisco (recap coming soon) book-ended a year of doing some ultras for me.  Don't get me wrong, I will still be enjoying the occasional marathon or ultra but for the most part, my focus is on trying to see if I have any fast-twitch muscle fibers left and to utilize them, when my traveling and working schedule allows, in the triathlon.  However, without a doubt, some longer races will be calling my name.  the first one up in 2011 of any particular note is the 1st Annual Sandbox Indoor Trail Marathon on Valentine's Day Weekend. 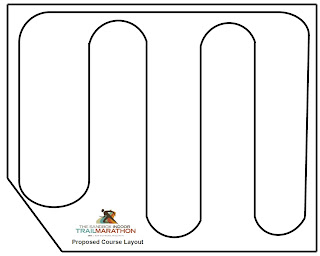 I definitely had not really planned on spending Valentine's Day this way not too long ago but this seems like a wonderful way to take on a new race. Based in Wisconsin in February (I actually just got cold thinking about it) the Sandbox Indoor Trail Mararathon is very intriguing to me for two reasons.

1. Back at the turn of the last century, indoor races of very long length used to back arenas.  I like this homage to the past.
2. The indoor marathon has been done before but I can't say a trail one ever has.

Consisting of 105(ish) laps of what basically looks like an upturned Capital letter "E", the course runs on the Sandbox Arena floor used mostly for motorcycling events. This just looks so unique and fun!

Given the oddity of the course and what looks like no less than 1260 turns (yeah, seriously), I had a feeling the footing might be a little on the potentially shifty side.  As such, I have decided I will be wearing a pair of ICESPIKE in my shoes for the race to help with traction.  It will be an test I have similarly done before given I wore the ICESPIKE product in the Rocky Raccoon 50 mile last year.  They provided excellent traction and didn't even bother me on some of the semi-paved portions of the race.  Now I get to see what they will do on this surface as well.

In any event, it promises to be a marathon unlike any I have ever done, and once you have done 125 (and counting come race morning) sometimes a little variety is good.   Registration is now open and I hope to see you there!
Posted by Dane at 1:22 AM