In a week I will be attempting to set a new PR in the 10k distance.  As the course definitely has some downhill in it, I thought it was a good time to bring back an article I wrote on Downhill PRs.

Recently a discussion on a few internet forums surfaced about the use of a personal best which was achieved on a course with either a moderate or large amount of downhill.  With the rapid filling of the Boston Marathon this past fall, many were lamenting that too many runners had “snuck in the back door” by using a personal best from a race which made it easier for them to meet their qualifying time. 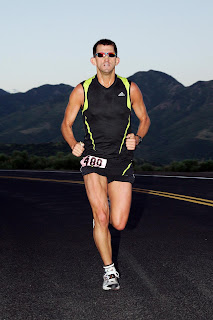 Let me get something out of the way off the bat: without a doubt, especially over a short distance, a race which has a net downhill will most assuredly make it easier for a runner to go faster than they normally would on a flat course. However, as that distance increases, the advantage gained from downhill running will usually be leveled by the beating the legs take.
Some ludicrously compared downhill running to cheating the way baseball players using steroids did or runners who blood dope with EPO.  This is, of course, ridiculous. There will always be advantages gained from certain races which take place in the outdoors, be it from the course, or wind or the ability to master the way a course is set up (e.g., some runners being able to mentally deal with an out back or looped course better than others.) However, until every race, from 100 meters to 100 milers, is run in a climate controlled dome on a 400 meter track, there are always going to variables to factor into the finish times.
This variance is what gives running, off the track and out into the world, its distinct flavor.  Basketball courts never change.  Football, baseball and other sports played in stadiums must deal with weather but never have to add in a variance for elevation change or terrain.  With running, we know that some days are going to be hot or cold, rainy or dry or run at elevation or with a certain amount of up or downhill.  The only thing that matters to the 99.9% of us who will never vie for a victory in a race is whether the distance covered on that particular day was ever covered in a faster time by us.  It is, after all, a “personal record”.  It only matters to us, maybe our spouse and potentially the dog (and only because if we are happier maybe he will get an extra treat that Sunday night.) 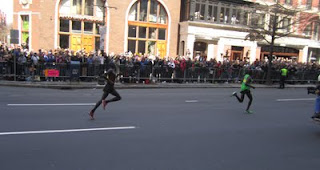 For that remaining .1% who must deal with governing bodies of our sport, I feel for them.   If nothing else, look at the fact that the Boston marathon itself has been concluded to contain too much downhill to count as a world-record course.  The race which has attracted the world’s best, year in and year out, has not seen a world record set on its course in close to 30 years somehow is “too aided”. (Dane note: Until this year, that is.)
I guess those winners will have to settle for world-wide accolades, a laurel wreath…and a massive check.  I can only hope these things will make the winners feel better that some random internet person thinks their time is unworthy of being a “real” PR.
Posted by Dane at 12:05 AM

I'm never going to finish in the money in a big race, though I do occasionally medal in my age group at smaller races, but I always feel like this the differences in courses is part of the game: Picking races and strategizing to give myself my best chance at a PR.

For example, I know there's a race in December (I love the cold) that's my best chance for a PR. On the other hand, there's one in september that's in a turnpike tunnel under water, so it has 2 steep downhills and 2 steep uphills on the back-and-forth. It's still fun, but I know I have not a chance of PRing there.

I guess I could see how if I were a record holder I might be upset if someone beat my record on an "easier" course, but in the case of Boston, I've never heard the Boston Marathon called an easy course even with its downhill!

You make a good point about the overall distance and quad burnout.

I tried to BQ at Steamtown a few years ago since, like an idiot, I thought the overall descent would help. It didn't. I've had my BQs and PRs when I felt most confident, period.

It also helps to tell people (looking at you, Dane) "I am going to PR today!"

Good article, I recently PR'd big time in June in the Fontana Days Half Marathon, which is touted as the world's fastest half! I ran a 1:34:58 even besting my time of 1:36:08 as a 17 year old. I had been averaging 1:50 minutes for the past 3-4 years for the half, but ran a 1:44:58 in a very hilly half about 2 weeks before my new PR. I was excited to run Fontana Days because I had recently dropped 20 pounds and was ready for a PR! Although when telling people I had PRed I was hesitant about telling them the race, because I didn't want the legitimacy of my PR to be challenged! You are so right about the pounding your legs take! After my finish, my legs buckled and I almost fell, never do I feel like that after a flat half! Thank you so much fro reposting! :O)