I first met Leah Thorvilson at the Mississippi Blues Marathon in 2009.  I didn’t see much of her that day as she is blazing fast. However, I realized we were kindred spirits when I learned she hated the heat and humidity as much as I did.  The MS Blues Marathon that year suffered an uncharacteristically muggy race day. (Ironically, in 2010 it was unbelievably cold to the tune of 18 degrees or so.  Happily, this year Mother Nature relaxed a little bit and we had picture perfect weather. But I digress.)

I finished in a time of 3:06 while Leah just missed going under three hours in a time of 3:00:52. She was so hit by the weather, she need some IV help.  That’s how fast she runs when it is her “off” day.
But more than her speed, she has an infectious happy attitude – one I wanted to dig into a little more and share with the rest of you.  So I sat down with her electronically and got this interview. 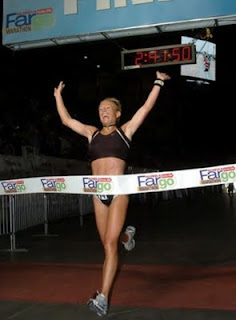 DR: You are an Olympic Trials Qualifier for the marathon.  When did you first do this?
LT: I ran times that would have qualified me for the A standard actually in 2009, but my first qualifier in the window was at the Fargo Marathon, May 21st, 2010. I ran a 2:41:52. (Dane note: Leah ran a 2:37:56 at the Green Bay Marathon which would have given her the “A" standard she speaks of if it has been within the allowable time period.)

DR: What are your plans between now and the trials?  Do you want to try and run a faster marathon time in between now and then or will it be about maintenance and training?
LT:  I plan to run Chicago this fall. That will be the only other competitive marathon. I may step into a few others just as training runs, but nothing big. I know I will also run some shorter races but I haven't officially lined out anything other than Chicago.

DR: Has running always been a part of your life?
LT :I started running in high school really. I did some track in junior high but it was very non-serious. My best event was actually the discus!  I think I was 6th or 8th in the district. In high school I ran the 300m hurdles, the 4x400 and did the triple jump. I got thrown into a few 4x800s my senior year and did really well, I guess that was a premonition of things to come.

But, I was never a standout. I went to state once in all 4 years, in the 4x400. I started running distance and cross country in college and then moved up to the marathon and beyond after that. So far it seems the longer the better for me.

DR: Do you have an athletic family?
LT: My sister and her husband and father in law all run marathons. My dad used to run, never a marathon but 5ks, but he had a hip replacement and can't run anymore. My mom was never a runner. I also have some cousins on my mom's side that have started running marathons. I guess in general, I would say I have a family that is active and enjoys sports, but I don't think I come from a genetically gifted pool like Shalane Flanagan or anything.

DR: Do you enjoy other sports?
LT: I enjoy a lot of other sports....but I suck at almost all of them. I love to watch football, I was raised on baseball, and I enjoy basketball more than I used to. However, all the time-outs drive me bananas. I will play "PIG" or "HORSE" but straight up basketball you can forget it. I also like volleyball and soccer. Not that I play either one often, but it's always fun when I do. I also enjoy water skiing and wake boarding, but I don't get to do these often since I don't have a boat. The only things I do on a regular basis though are run, yoga, and pilates. 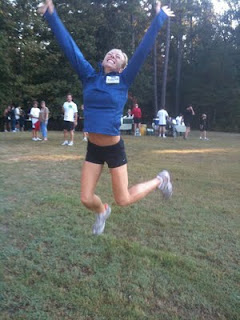 DR: What's your vocation?  How does that work into your running life?
LT: My vocation....that's funny...I work retail in a running store. I was in business sales but I quit to pursue running more seriously. Hard to dedicate the time you need to when you are working a full time job.I know a lot of people do it, but I wasn't doing both successfully, so I decided to go for one all out. Corporate America can wait. :)

DR: Have you done ultras?  Do you have any upcoming?
LT: I have done 3 50ks and a 40 miler. I don't have any more before the trials, but look forward to exploring longer distances next year.

DR: What motivates you?
LT: I am a big fan of Joan Samuelson. She has come to Little Rock a few times to do a 5k we put on at the store I work for. She is a great person aside from being an amazing athlete. I grew up watching Kara Goucher run. She would not remember me, we didn't know each other, but we both lived in Minnesota. She was in the smaller schools' division but could have beaten anyone in the larger schools too. It has been fun to follow her success and I definitely consider her an inspiration. All the super fast American women inspire me. I would love to be even a small part of the up-rise of fast Americans. Desi's performance at Boston...absolutely incredible. 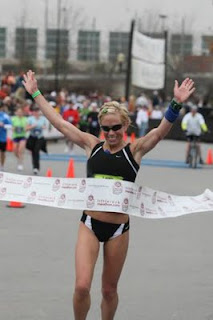 Personal motivation....I have never been as successful at anything in my life as I am at running. I just want to see how far I can go with this. I like the feeling I get from it and especially love the people I have met through running. They are my second family. I want to inspire people. Having anyone tell me I have helped them or motivated them even a little is such a great feeling. That motivates me. I also see opportunities to make a mark in some ultra distances and I think that would be cool.


DR: After the Olympic Trials do you wish to take on some more ultras?  For example: Western States? Badwater?
LT: I am very excited to run more ultras - I think initially I will test out 50 milers and 100k. I think I still have a few years beyond 2012 to be highly competitive in the marathon and I think the training for 100s would be quite different. (Although athletes like Michael Wardian have proven you CAN be highly successful at both distances) I plan to do a 100-miler in the next few years, and I promised my friend and race director Chrissy Ferguson that when I do it, the Arkansas Traveller would be my first.

While I have a tremendous amount of respect for everyone who completes, or even attempts Badwater, I doubt I will ever do it. I think I would die. I recently went on a 20 mile run in the Arkansas heat and had a friend biking with me to carry my fluids .I drank 80 oz of water and electrolyte drinks and still lost 4 pounds and had trouble finishing the run. I am a very very heavy sweater, so I don't know how I could manage in the conditions of Badwater.

Chances are anything Leah sets her mind to she will be highly successful at.  Keep your eye out for her in name in the future!
Posted by Dane at 6:11 PM