I recently interviewed Justin Gillette -  a runner with both speed and resilience.  Justin rarely runs a marathon over 2:35, even though he races dozens of times per year. Currently third on the all-time American win-list in the marathon distance, his victories are all the more impressive because of the level of competition he runs against.

He is currently the assistant cross country and track coach at Goshen College, his alma mater, giving back to the place which gave him his wife (more on that later). In addition, he does online coaching counting amongst his charges none other than one of the co-founders of RunningSkirts.com - Cindy Lynch.

DR: How long have you been running? 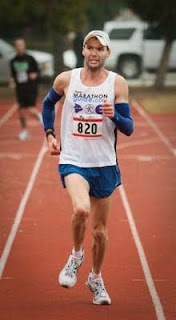 JG: I started running on 2/14/1996 to get into shape for the 7th grade PE mile as part of the Presidential Physical fitness program. My goal was to beat a fellow classmate whom I did not like. I ended up achieving that.

DR: What is your earliest racing memory?

JG: The first race I ran was in 8th grade cross country season. Our school hosted the first meet of the year. The race was 3k, which I took 2nd to another runner from Potosi Middle School. I remember this very well. Early into the race Wayne cut the first turn pretty bad. After seeing this I broke into a sprint to catch him to inform him of his cheating, it was to no avail. Throughout middle cross country he beat me every race and I took 2nd or 3rd in nearly every meet.


DR: What race was your first victory?

JG: The first race I remember winning was Polish Festival 5k in Bronson, MI, but that 5k road race was very tiny so barely counts as a win. (Dane’s note - Never apologize for your competition unless you specifically run a race because you know the runners there are massively inferior.)

The morning of my high school graduation there was a marathon an hour from my house. The high school graduation was scheduled for late evening and the marathon was early morning, a perfect fit. On that day I ran my 4th marathon (Mid-South Marathon in Wynne, AR for the first 2 marathons and Boston was my 3rd) and won the Berryman Trail Marathon in Potosi, MO. By the time graduation rolled around my legs were stiff and sore. I needed help to get up the stairs in order to walk across the stage. This all took place on a Saturday. Two days later I ran the Great Race half marathon. That was a miserable 1:47.

DR: Did you run in college?

JG: My college selection was focused on NAIA level schools. NAIA schools have the marathon as an event at their track and field national competition. During my high school career I competed in 4 marathons, one being the Boston Marathon where I ran a 2:56, so I assumed NAIA colleges would be interested in me since they had the marathon event. My college of choice was Bethel College in Mishawaka, IN, but their assistant coach Ryan Salem thought I was too slow to compete for them. I ended up running for Goshen College, which was in the same conference as Bethel College. I made it my mission in college to not get beat by any Bethel runners.

While at Goshen College I was a 3-time NAIA All-American in the marathon and 1 time NAIA All-American in the 5,000 meters during indoor track. I could have been a 4 time Marathon All-American but I was booted off the track team my freshman year due to running the Boston Marathon. That Boston Marathon was a break through race for me - I lowered my PR from 2:56 to 2:34 - well worth getting kicked off a college team for. That race is where I learned you can race a marathon, not just run one.

DR: Did any Bethel runners ever beat you?

JG: I was only ever beaten by one Bethel College athlete in my 4 yrs of college. Mark Davidhizar beat me in the 5,000 meters during the Goshen College track meet in March 2004. This occurred 2 weeks after I PR'd with a 15:06 5k indoors, and a few days after having my Wisdom teeth cut out. I was forced to compete in the home meet to score points for the college team, even though I was weak from the operation. Mark won and I was 2nd. He celebrated the entire final 100 meter stretch. After the race I told him I did not appreciate him celebrating so boastfully on my home track and that I would make him pay for that.

Later that track season we hosted the MCC Conference Championships. I pushed the pace hard in the mens 10,000 meter race, ended up lapping the entire field on my way to a win. The field included one athlete who would be a NAIA 10k all-american the following month, and of course Mark Davidhizer. When I lapped Mark I reminded him that he should not have embarrassed me and celebrated so much.

DR: Where did you meet your wife?

JG: Melissa and I met the first night of moving into Goshen College. I remember it was a Thursday. We were both walking around Goshen College campus checking out our new surroundings. I approached her about joining her on her walk. She rejected such an idea. Possibly because I failed to shave my beard all summer. Three years later after asking her out many times and being rejected many times she finally agreed to a date. We got married in May 2007, did Mayors Marathon for a honeymoon trip.

DR: Did you know your future wife was a runner when you asked her out? 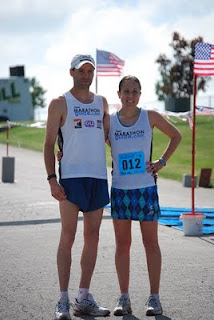 JG: I knew Melissa was a runner as she was on the Goshen College track and cross country squads. She was new to running, only did it her senior year in high school. Over the course of 3 years I convinced her to date me and also to start running marathons. She ended up being a 2-time NAIA All-American in the marathon.

DR: Do you plan lots of marathons with your wife now?

JG: We try to plan it where we can run 8-10 marathons together during the year. Melissa is a PHD student at Notre Dame and has limited number of days she can be away. I run more marathons then she does each year. The last few years I have been running between 15-20 marathons a year, while she stays in the 8-10 per year range. We like to travel and running has allowed us to achieve that together.

DR: Do you train with her or separately?

JG: During our training we try to run together as much as possible. So on speed workouts we will do them on loop courses where we can see each other and provide encouragement to one another. We have a jog stroller that I will push our son Miles in, he is 20 months old. If I am pushing him it slows me down to about her pace so we are then able to run together as a family.

DR: Do you train with anyone other than your wife?

JG: Israel Gonzales, Doug Yoder, and Mark Furkis are the three guys I use to help me with my training. Even with a decent amount of experience I have found it nice to have others help overlook my training goals and race selections.

DR: What are some of your future long-term running goals?

JG: I set the goal of running a sub 2:22 marathon back when that was the Olympic trials qualifying time. Even though that trials time has since been lower to 2:19, I still want to chase my goal of a sub 2:22. I can't see giving up on that due to some organization lowering the trials standards. It still remains a goal time, but overall qualifying for the trials is not a goal at this moment. I would like to run a marathon in all 50 states, but not pressing too hard to do that just yet. Staying competitive and running quality marathon times is what motivates me at the moment.

Along the way I might win a few marathons, but that is just a byproduct of the hard work I put into the sport. Currently I have ran 80 marathons, winning 29 of them, which ranks me 3rd All-Time American in career wins.

I have always felt that my determination to succeed far exceeds the pain I put my body through, and as long as that is the case good things will happen in my running career.

I think we can all agree with that.  Good luck to Justin in all his upcoming races!
Posted by Dane at 3:07 AM

Justin has always taken his running very seriously. In high school he would show up to practice with his race uniform sometimes. He definitely deserves all his running accomplishments.

Justin is a great runner and I am proud to have gotten to know him with his past four running with the Kona Marathon in Kailua-Kona, Hawaii. He has a devotion to running, Melissa and Miles that can't be broken. Keep up the pace Justin!

If you beat Justin in a race watch out. He will use that as motivation. I beat him in a 5k (probably one of the few times I have beat him) and he dominated me in our next race which was a marathon.

Justin ran Maui in January this year while I was having some significant medical issues, and made a point to tell me he was going to win it and dedicate that win to me. He indeed did win it and then dedicated it to me in the Maui press. I was very touched by his graciousness & selflessness.

Thanks for the interview and helping spread the word for a true winner!

Justin it takes alot of perseverance and hard training to achieve what you have done. We look forward to seeing many more wins and accomplishments.....keep up the good work.

Justin is so committed to running.
It amazes me that he doesn't let the weather or temperature detour him from hid daily practice.
He is very competitive but has a real compassionate heart for others. I am proud of him and all that he has achieved.

Great article!
Justin is the real deal. Everything he said is just how he talks in person. He is entertaining to have on long runs and is very motivational for his pupils on the Goshen College running squads!

S. Tripp, i had the pleasure of knowing Justin in high school and remeber running with him a couple times during the summer after "open gym". Justin you are an awesome inspiration! Keep up the great work!!