This article caused quite a stir when I first printed it. As with every thing one reads, it is best to read the entire piece before jumping to conclusions.  And if you need clarification - ask! That said, I still stand by the main point that I personally feel that, for the most part, if you are in an actual race, you should be racing. That is my opinion. It is not law;it is not the absolute rule; and there are obviously exceptions to this statement.

A friend of mine recently said “Today, I signed up for a marathon that will be run next January. I've probably got a while before I need to get serious about my training.”  I thought about it for a second and told him, well, that depends. How long is a while?  What does he mean by serious?

This nation of runners has become marathon-crazy.  This is both good and bad. One of the bad things I see is how many runners just seem to be clamoring for ways to pad their stats, especially when it comes to the simple number of marathons they have completed. Never mind the time those marathons were run in as these runners are just looking to complete the race. 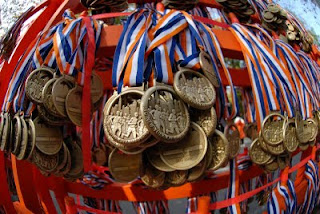 Believe me, simply completing a marathon is a big deal.  (Read that again.) But then, as a runner, the desire to move on, to go faster, to challenge one’s self should be burning deep inside you. It is not necessarily about how fast you wish to, or can, run but rather the desire to run faster in and of itself which is the crux of the issue.

Often claims are made that those who feel certain standards for entrance into some marathons are elitist. But the fact of the matter is, when it comes to racing, everyone wants to get faster. Denying this is just an outright lie.  If someone does not wish to get faster and only runs “for fun” then that is wonderful.  But why sign up for a “race”?  The free road is open 24/7/365. Hit it up!

I truly love that more and more people are pushing themselves to take on marathons and halfs and all sorts of running adventures. But in the case of my friend above, six months to get serious about training for a marathon is not all that long of a time.  Granted, he is a relatively fast runner to begin with and is shooting for a sub-3 hour time.  He has a base and he has fitness.  Six months may be a little too long of a training cycle for him specifically to get ready for this next race.  But not by much.  Not if he wishes to get, as he says, “serious” about training. 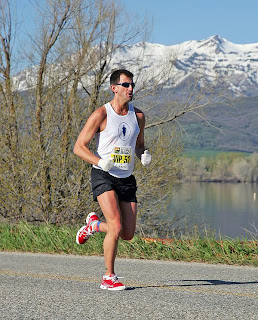 I can honestly say I have not trained the “proper” way for many marathons.  In fact, I can count on one hand the few I have even remotely done something that I would tell others to follow.  However, this year, at the St. George Marathon, I will be attempting to set a new personal best for the first time in nearly two years. (N.B. A blow-up Achilles problem caused that not to happen.)  The race lines up with my work and race schedule, allowing me to take a relatively brief respite from racing (only doing 13.1 mile races the month prior) and I have finally recovered from my 202 miler last year. Will life probably intervene and throw roadblocks in my way on the way to this new personal best? Of course!  That is what life does.

But the time is far since over for me to simply complete in marathons. I want to compete.  With others, with myself, with the clock. And I will beat the clock (in the sense of setting a new personal best) unless something goes completely awry. But the fact remains, even if everything does go wrong, I set out that day to push myself, to strain and struggle for more.  Not just to collect a shiny medal and the accolades of others. Competition is a wonderful thing which should be embraced.

I liked this post, everyone in life has a different story and a different path in life which can be influenced by things that are out of your control, but when you enter a race you are trying to achieve something, for some this may just be completing and in most cases there is a story of transformation to get them to that day, without the goal I agree why enter? – now that being said I have run many a marathon where I have a goal, and learn a different lesson in the marathon as a result of a disgraceful performance on the day, but yes I did have a goal and something I wanted, the failure and lesson made me stronger.

For some, just to get the medal is enough. To complete the course once. But I agree, then what? Runners are seeking to improve, by training for a race. We can race others, or just ourselves, but a race is a race, by definition.

I'm a relatively slow (just under 5-hours in my only one) marathoner, and I don't see anything too controversial or anything negative about what you've written here.

You never say, as some have, that slower runners have no place in the marathon. On the flip side, I don't have a problem with Boston and other marathons having qualifying times that I can't (or don't want to train hard enough to) meet. Not everyone who plays baseball has the combination of physical ability, time, and level of interest to get to "the major leagues." I think of Boston as "the major leagues."

I think everyone who runs a race is racing -- not necessarily racing other participants, but racing against themselves and their own personal struggles.

Personally, I do care about speed and PRs (I'm faster, but by no stretch of the imagination elite) at the shorter distances, even though long, slow, distance is what I enjoy the most) and I want to finish faster in my next two marathons.

What I've been thinking about -- and this article brings to mind -- is how hard do I want to work at it?

Somewhere between my somewhat injury-assisted 4:58 (felt great on race day but ITBS had made me miss or cut short several long runs) and a Boston Qualifier (which I think I'm physically capable of if properly trained) I feel like there's a line beyond which running is no longer fun for me, and instead becomes like a second job, a source of stress rather than enjoyment.

I think every runner has that line somewhere, and it's in different places for everyone. I don't think you'll ever see me at Boston, but I would like to eventually get down into the low 4's or 3's.

Thanks again for a good, thoughtful article (and for answering my nutrition question the other day). I hope you don't get too much flack for it!

Thanks for posing this question of why folks run. It seems that many are just racking up notches in their belt and that is one way to go. Some are out racing for the first or second time and have not felt comfortable pushing their limits because of the time commitment or injury concerns. When I was younger I loved to race and then as time went on I just wanted to complete runs. Now as I have regained a fire for running I want to run my best and have started training accordingly. Everyone can run to the beat of their own drummer, and that is what makes running great. You only need two feet, maybe shoes, and a desire to place one foot in front of the other.

I agree with your post whole heatedly Dane! I thought about the subject a few days ago when I met a Vegan Restaurant owner who also runs Marathons. He said he is now doing Triathlons because Marathons are so easy. I asked him what he ran his last Marathon and he said 4:50, before adding that he "barely trained for it". My thought, maybe he wasn't pushing himself hard enough. To me, pushing yourself to a personal best is not easy. I ran the Pasadena Marathon in May and set out for a Personal best, and although I fell short of the sub 3:10 I was shooting for, I was still proud of the 3:21 I ended up with. I could have probably ran an "easy" 3:15 had I not pushed myself, but I wouldn't have been satisfied with an "easy" 3:15. A hard fought 3:21 during a sub 3:10 attempt... I'll take that!

I agree with you Dane. I really like Eddie D statement “A hard fought 3:21 during a sub 3:10 attempt...I’ll take that.” Loving that sentiment and it is how I have run all of my marathons, give everything in training and on race day, no regrets or apologies necessary. I am always honored when someone asks me for advice I am very honored and my advice is always the same: Train to go for it and then go for it on race day.

Dane, thank you for this great article.