Everyone, all together now: “Duh.”

However, it is amazing to think all of the other things which running seems to improve as well.  First and foremost, this is not a scientific study.  In fact, I thought about doing some research for this but in five minutes found studies which more or less came to the conclusion that what people think is more important may actually have more of an effect on them that what actually is important. As such, these are simply my opinions based on my own experiences. Which are probably more varied than most.

1. Running Makes You a Better Driver

Having been running for a few years, I now do all the things in a car I should have been doing already.  When making a right hand turn from a stop-sign, I don’t roll through the intersection only looking left. I make more than one look to the right as well, in case someone is running (or walking) from that direction. My eyes are more open for cyclists or children who may dart out in front of me.  Keep a keen eye for those who dart into your path while you are running helps stop a brush with some tires or an elbow. Making sure you don't do it when you are driving helps stop a catastrophe.  I now notice so many others just sliding through intersections and the like without even a peripheral glance to their right. An informal surveys amongst my friends showed those that are active out in the streets are also much more aware of their surroundings when they drive.  If you are afraid some jackass will plug you with their fender because they are texting while driving, chances are you will do less of that yourself when you are behind the wheel. 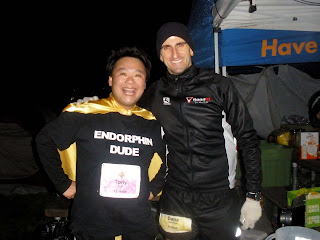 All the endorphins that running releases not only naturally block pain signals produced by the nervous system, but are also believed to enhance the immune system, relieve pain, reduce stress, and postpone the aging process.  And what about any of those will not make you more pleasant to be around?

However, there is something else about running, more than any other exercise I had done, which seems to center a person, allow them to be more humble and brings out the best of their character traits. Is every runner a saint?  No. But I have met more people who are nice who are runners than I have any other subset of the population. Some people can run more all they want and will remain slack-jawed and idiotic. Unfortunately, only lobotomies will help those people. But they are still probably more pleasant to be around because they run.

3. Running Makes You a Better Lover

Even if I had done research on this one, I am not sharing it here. But for all the reasons listed in the previous paragraph, it is not hard to imagine that healthier, happier person would not make for a better significant other.  But to be more scientific, while running, blood flow is increased to certain “areas.” This increases your libido and makes sex more enjoyable!

I know you are lacing up your shoes right now but I have one final point.

Not just in the putting money back into the coffers of local races but because running helps fight depression, teaches you discipline, and helps those who may be stuck in a nowhere position find the tenacity and resolve to create a new life for themselves.  It has already been proven that road races are more or less recession-proof but one of the reasons behind that is that runners do not let little things like crippling economic depressions stop them from what they love to do most.

So, don’t do it for you.  Do it for the economy, for pedestrians, and for all the future babies out there.
Posted by Dane at 10:24 AM

it's all about pace said...