I have long advocated that until one has worked a race, designed a course, been a volunteer at an aid station etc, for the most part you should keep your yapper shut when it comes to criticizing a race.  Sure, you spent X amount of dollars so you have a “voice”, so to speak.  Just be smart when you plan on using it.

The first race and instance which comes to my mind, dealing with a sprint distance triathlon that cost all of $35, was where some people were advocating that the race should have had chip timing.  This race, which turned out to have been run beautifully for a first time event, was one where the race directors were expecting, at most, 100 participants.  When they got closer to 200 they had to close down registration and make changes to the course to allow participants a fair event. (e.g., They moved the swim to the last leg, in part I am assuming, to keep everyone from killing themselves in the mass start in a pool.)  This was an event that in no way shape or form needed a chip timing system, even with the 200 people.


Chip timing is not cheap.  While it varies from event to event, you are looking at around $2 per person per chip and an initial fee of ~$1000 for the system. This is completely too expensive and unnecessary for a first time race expecting very few competitors. Unless, of course, you want that miniscule $35 fee to jump up to $50 or so (possibly more.) Would it be great if EVERY race had electronic chip timing and satellite hook-up to automatically beam results to everyone’s MyspaTwitbook account? Sure!  But to insist that a race needs it from the get-go, when it is small neighborhood race even, is just a little ridiculous.

In the half marathon I participated in over the 4th of July once, there was a mix up with some of the packets not getting to the packet pickup on time. First and foremost, let me make a quick aside here.  Runners: if the time for an expo/packet pickup is from X to Y, why show up an hour before X?  Unless it is the Marine Corps Marathon and they honor the first guy in line with a special award for having all the time in the world to show up and wait like he is getting tickets for a Beatles reunion or the new iPhone, there is no need to do this. All you do is make yourself impatient even if the packet pickup starts on the exact minute it was supposed to. I have long told race directors that if you want runners to show up at X, tell them to show up at X plus 45 minutes. Everything will be right on time then. But I digress.

I can absolfrigginglutely guarantee that the race director did not wish to receive the packets for a certain number of racers later than expected. It is unfortunate that some people were inconvenienced by not being able to get their packet and be able to put everything in place the night before the race. I can agree that getting up a little earlier than planned to get the packet before the race was a bit of a bummer, but it was not a horrible thing. (Heck, I had to do it too because I signed up so late. So I was in that boat.) And stating you spoke to someone who told you the packets could be picked up earlier than stated to the very people who would have answered any such email or phone call, just makes you look like a liar and will not help the situation at all.  There I go digressing again. 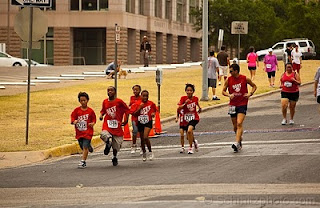 My point is that for the vast majority of the time, races are put on by people who love the sport and are not doing it solely to make a buck. (Although profiting is not a bad thing.  I am not against that, in theory, but I am when it is at the expense of the race experience.) These people want runners to have a good time because they are usually runners themselves.  I also understand that as the squeaky wheel gets the grease, it can be a few Bitchy VonMoaners who can make it seem like everyone is complaining.  So, let me say that there were plenty of people in both races who had nothing but positive things to say.  In fact, a good friend named Andrew who I ran into at the half-marathon was in second place until he was either guided the wrong way or missed a turn on his own.  Easily running two plus miles of extra distance, UP a hill mind you, he had every reason to be unhappy.  When I found him after the race he simply shrugged and said “Got a good long run in today.”

Moral of the story?  Whenever possible, be an Andrew not a Mr or Mrs VonMoaner.

Also say thank you to those that volunteer! They are there for you racers rain or shine, hot or cold!

It is running folks it is supposed to be fun and challenging. And some of the fun and challenge comes during the parts of the event that don't take place on the road. Relax live in the moment and enjoy the few extra miles that happen sometime.

Great post Dane! As both a Race Director and VERY frequent volunteer at races I appreciated every word!

Hey Dane, I just came back to read this post again because I am shocked at how many complaints I see on a race's fb page I'm looking at. It's ridiculous. This is a GREAT post that every runner needs to read.