I think streaking is not that wise of an idea.  Of course, if we are talking about the running around naked kind and it involves fit women, I am all for it.  But when it comes to running streaks, I have documented my feelings on that (Really? Five Years ago?!) and for the most part they stay unchanged. Which means, of course, recently I was in the middle of the biggest running streak quite possibly of my running career. 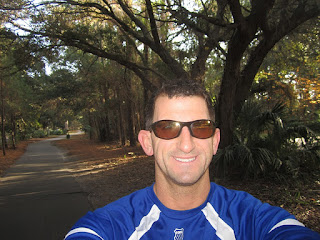 Starting with the day before the Kiawah Island Half Marathon on  December 9th, I had been running consecutively for quite some time. With no more traveling or flying for the rest of December, I was able to be at home, rest and recover from runs unlike anytime in the previous year. I also had a little goal of running over 2,000 miles in 2011 in sight so that kept me going as well.  But when 2011 ended, I kept going. I signed up for the Graveyard 100 in March and knew I was going to have to up my mileage in order to do as well as I would hope to do. So I kept running. Soon, most of January was gone and I hadn't missed a day.

Then about a week ago I caught a cold. It surprised me as we have had such relatively pleasant weather here Salt Lake City. But nevertheless I caught one and it started to drag me down. I was still putting in my miles but for the most part they did not feel beneficial anymore. The nail in the coffin to this streak was the extenuated airplane trip, damaged luggage and then a long first day at the ING Miami Marathon expo. Once I got back to my room, with a VIP dinner to attended, I knew I was done. So Friday January 27th I did not run. Forty-eight days of running and 504 miles later the streak was dead. I promptly woke up feeling like death warmed over. 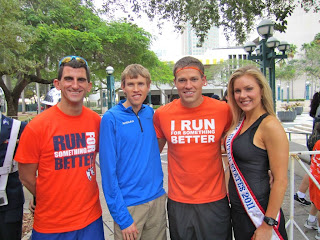 However, the next day, when I think my body finally was able to digest the rest it was given, I had not only an excellent training race but an all around good running day.  Throw in the run from my hotel to the start of the race (~4.5 miles), the run with all the kids for the Run For Something Better program and my run with Raven and I totaled nearly 30 miles on Sunday.

Nevertheless, I still feel the same way about streaks - for the most part they do more harm than good. The body only truly recovers when it rests.  It needs time to prepare itself for the next run. So even though I thrive best in races when I take less than usual rest than others, I know for sure that proper rest is needed.

It goes without saying that everyone is different.  Some people want to streak.  Some people seemingly need to Streak (see Raven above). But to simply go out and put shoes on every single day and go for a run, in the face of facts that tell you that perhaps Tuesday is a day you could take off and feel much better for the rest of the week, month, or year, it is in your best interest to take that Tuesday off. But only you know what works best for you. Find what that is.

For me and Mrs. USA, well, we will take our rest with a side of lean beef.
Posted by Dane at 9:59 AM