This past weekend at the New Year's Revolution Run a few runners were talking about how they were surprised when they had miscalculated their hydration in a race where you could get a drink of water about four times a mile. I mentioned I had learned the hard way this myself and we began talking about ways to hydrate. Recently, I had experimented with two new products and I wanted to share them with you. 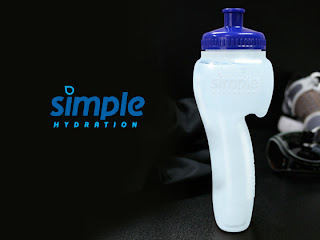 One, called Simple Hydration, is simple a water bottle, to put it bluntly.  But it is a pretty unique one in its design.  Not meant to be a solution to an ultrarunning distance, it is for athletes looking to get runs in up to about 10 miles who need a little support on the way.  I first gave it a test run in Fort Lauderdale in November and was a little skeptical.  I honestly do not like much of anything in my hands or on my waist when I run.

The Simple Hydration bottle is meant to fit on your waistband, in the center of your back.  Here goes the chafing, I thought.  Much to my surprise, even though it took a little bit getting use to (I would run naked if it was legal and not an eyesore) it neither chafed, moved nor bothered me.  My only problem was that with so much of the surface area of the bottle touching my skin, the potential for chafing remained.  In addition, body heat really can warm the fluid quickly so making sure the liquid is ultra cool is imperative. (The bottle also will fit in a utility belt like SPIbelt, although I did not get a chance to try that out.)

I think it is a sold product that fits the market exactly where it wants to.  It is not going to be something you use for trek over the Rockies but it definitely is enough to get you through 90 minutes of running on a hot day. 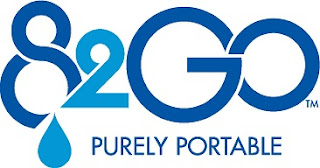 Another watery product I tried was called was called 82Go which is basically a product which touts its major green initiative. Like Simple Hydration I see the product being used best for shorter runs or where there is not a need for a great quantity of water.  Or, as seems to be one of their goals, to replace water cups at aid stations in races.  Given the amount of plastic is the same amount used in just the lid of most water bottles, that is a very good thing. I am far from the most ecologically friendly person on the planet (although i do try my best) but I think this is an excellent goal.

The product itself takes a second or two to master and you will occasionally squirt yourself in the eye. However, slipping one into the shirt pocket of a bike jersey or into again a SPIbelt, seems like a pretty good way to carry 8 ounces of liquid refreshment.  And while this may be pure conjecture, the water tasted really good.  I am not one who buys into purified water or has a problem drinking from the tap but for some reason, these little 8 ounces bods were yummy.

I think both are worth a try. Either way, get your water people, even in the winter.
Posted by Dane at 4:46 PM