Impressions from the Olympic Marathon Trials

In a word, Wow.
At the Olympic Marathon Trials in Houston, we all knew it was going to be an unprecedented day.  First and foremost, this would be the first time in trials history that the men’s and women’s race would be held on the same day, let alone the same course.  With a multi-loop course layout, this meant standing in one spot allowed a spectator to see the runners no less than four times. With the two different genders starting 15 minutes apart and an as-to-be-expected thinning of the herd of each race as the event moved forward, there were times where runners were coming through an area for a solid 10 minutes straight. 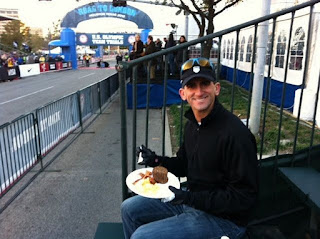 I was fortunate enough to be offered a pass to watch the race from just a few yards away from the finish. I had thought about donning running shoes and trying to cut corners and see the runners all over the course taking close and personal action shots but when presented with the opportunity to watch from the finish, could not pass it up. I enjoyed a little breakfast courtesy of the Olympic Marathon organizing committee and reveled that the sport I love allows so many to see its premiere events so easily. Throughout the day I was mingling with people who obviously were there to support someone but who didn’t know a whiff about marathoning as well as people so firmly entrenched in the running world that their names are legendary. 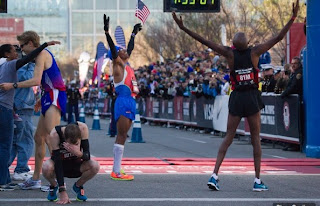 Much has been written about the top three finishers (well, four actually – as Dathan and Amy Hastings' near-hits and obvious emotional responses at just missing the team were heartbreaking) and I too was quite moved by them all. However, more so than that was the pure electric feel this race had to it. Each side had about five people who may have a shot at making the team.  Yet even knowing more or less who was going to make the team did not take away some of the drama. 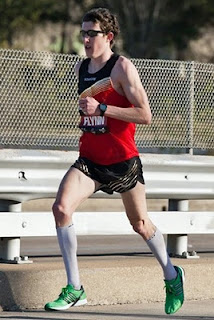 I spent a great deal of the day talking with the family of a relative unknown named Ricky Flynn.  Having never run a marathon, Flynn’s qualifying race was a solid but not awe-inspiring 64:15 half marathon. But as each loop went by, Flynn showed solid poise.  I was not a big fan of math in high school but for some reason, when it comes to running, I am Rain Man. Flynn’s family kept asking me to do computations and I kept telling them what he could possibly run but not to get too excited at each prediction as the marathon is a different beast.  However, as the day went on not only was I pulling for a guy from a small school (Lynchburg) I was telling his family times that I thought were conservative, just in case he were to bonk.
Well, not only did he not bonk but he ran a negative split on the course and ended up running a 2:13:41 for 12th place overall. I was almost as excited as they were when he came cruising down the home stretch.  They were just plain good and nice people and while I have not had the pleasure of meeting Ricky, if he is from their stock, he probably is a good person as well.
I also happened to spend a little time with the mother and (I think) sister of Brett Gotcher.  With the fourth fastest American marathon debut ever, Brett wasn’t exactly a dark horse but chances are he would not have a shot at the top three.  Obviously he did not get it, but coming in 5th overall, with a time of 2:11:09 had his mother quite happy. Gotcher obviously wanted more and now has four long years to wait to try again. However, in speaking with his mom and hearing the updates loved one were giving her from other parts on the curse, this was a huge victory for not only Brett but his family.  They knew he would be disappointed, get over it, realize how well he had done and then begin planning again. The cycle repeats itself for elite runners just like it does for those of us far less so. 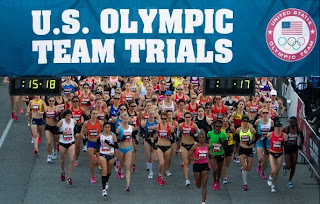 With regards to the women’s race, there weren’t too many surprises in the upper echelon.  However, it is obvious that the women’s overall qualifying standard needs to be tighten up a bit.  I say this with no disrespect to any female who made the trials but when there is a only a 2:47 time to qualify, and the top three women were all under 2:26:06, it is evident that some trimming at the edges needs to be done. I say this because these trials are wonderful to show the top athletes in our sport, and obviously there must be room for dark horses but it seems more than highly unlikely that someone will drop 20 minutes to contend. I feel it is only respectful to women’s running as a whole to say “Hey, look.  We now know what you can do. No uterus will be falling out.  You are not a fragile sex that needs to be coddled.  As athletes, you are fantastic. So, we are making the standard harder.”
These trials are about choosing the representatives for our nation in the Olympics. And while obviously there is room to showcase other running talent, I think the time is right to drop the times. The men have done it, removing the “B” qualifying standard and I personally see no reason why the women should not follow suit. A flat standard of 2:39 will indeed keep some women from ever even running in the trials, and that is unfortunate for them, but it will make the field more competitive overall. Moreover even with less competitors in the field, there will still be enough to give fans what they want to see. And honestly, if we wish for this sport to grow we have to figure out a way to make it more spectator-friendly.  More spectators means more sponsors.  More sponsors means more money.  More money means more athletes can concentrate on their craft and not worry about starving because of the difficulties of working full-time and competing at a word-class level. 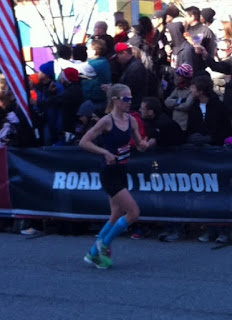 Another interesting item more than few people noticed were all the “ultrarunning” runners who were making a splash.  My friend Devon Crosby-Helms, known for amazing feats in the ultra world, had a four MINUTE PR and ran a 2:38 to take 36th overall.  Max King, part of the Montrail running team, cut out an impressive 19th place showing in 2:14:36. There were even more I am not mentioning, including those who have done well in both mediums, ultra and regular marathoning like Michael Wardian.  Mike ran a 2:21 in the trials and then a 2:31 the NEXT DAY in the regular Houston Marathon. Ooof!
Even more stellar than that were some of the older ladies in the trials. Colleen De Reuck, mother of 2 and all of 47 years old ran a 2:38. Linda Somers Smith, running in her FIFTH Olympic trials, ran a 2:37.  Linda is, in case you did not know, FIFTY years old. That sound you hear is your jaw-dropping.
There was plenty of disappointment at these trials as can be expected. I had more than a few friends fall short of their goals. But with regards to the trials as an event, it seems running is moving much closer to realizing its spectator-sport potential.  This might not have been the course many would have chosen as an ideal racing curse, but for us watching, it was fantastic.  In addition, we have quite possibly the strongest marathoning squad we have ever sent to the Olympics, on either side of the gender line. 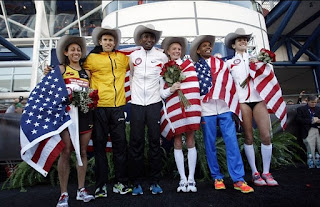 Personally, I cannot believe it has been four years since Beijing.  It does not seem all that long ago I was in Boston running all over Beantown, watching the amazing trials that went on that day. That weekend was new beginning for me as I ventured into the world of running as a full-time job. To think I have been doing this now for four years is astounding. As I watched the amazing athletes, knowing that each of them has had to find their own way in the world, I take great heart.  I will never have the speed they have but I can move forward with the same determination.
These trials really showed what heart and desire really can provide, even for the rest of us mortals.
Posted by Dane at 10:55 AM

Nice recap. I wish I could have gone. I had a ton of fun tracking the race on twitter and the runnerworld blog. It would have been way better to be there.

I have to disagree with you about tightening up the standards. If the race was just about picking the top 3 it shouldn't have even been held. Along with many of the pundits I picked 5 of the 6 Olympians pre-race. No matter the size of the field you are always going to have people struggle to finish in times that are not competitive. Dan Browne, a former Olympian, was the slowest runner in the men's field he ran a few minutes under the women's qualifying standard.

The amateur ideal of the Olympian died a long time ago but in the trials it is still there. It is always great to see the person with a full time job out there competing. There are now rumors that the standard is going to be dropped another couple minutes on the men's side. This would essentially make the trials field the realm of full time professional runners. Dropping the women's standard to 2:39 would have pretty much the same effect. I had about a dozen friends out there and they all knew exactly where they stood as far as making the team goes.

I think it was a terrible decision to eliminate the 'B' standard for the men last time around. Adding 'B' standard qualifiers to either field hardly dilutes the field. You still have the top one tenth of 1 percent of american marathoners out competing and that is a great thing to see.

Good luck in Miami. I ran it in 08 and it has remained one of my favorite races.