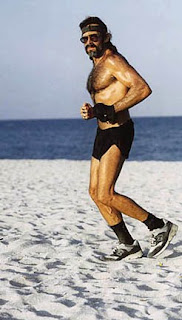 Back in January, when I was in Miami for the ING Marathon I had hoped to take part in the iconic Raven Run in Miami Beach.  However, the marathon taking a little too much out of me, and logistics kept me from from getting to the beach for a jaunt with Robert Kraft, aka the Raven.


Fortunately, my trip allowed me to run this time as his route was on my way to the lululemon store in Aventura, Florida to lead a fun run and do a book signing .
I wrote a blog about streak running nearly three years ago HERE. (Happy to see that for the most part I still agree with myself and didn't say anything too dumb.) That said, I still respect Raven's dedication to the thing he does.

Upon arriving at the meeting spot at the appropriate time (4 PM) I forgot that we were on Miami time which is sort of like "Island time" and no one was there.  Around 4:15, Raven showed up.  Raven is know to have an impeccable memory for faces and names and he recognized the other runner waiting for him next to me.  He then asked if I had ever been there before.  Two seconds later his eyes lit up and he said, "Dane!  The guy with the book at the Miami expo!"  We spoke for a bit as he readied himself for the run and as time ticked away I knew I was going to be cutting things very close to get up to Aventura on time.  However, it was great to spend time with Raven who was just a very pleasant man who seemed to genuinely care for those around him.

Every runner who does the 8 mile Raven Run (there are four separate routes) gets their name in Raven's list and are given a nickname.  I did not think I would have time to do the whole 8 mile run until another runner showed up who Raven mentioned would not not mind going a little faster than Raven's usual 10 minutes per mile pace.  However, before parting ways, Raven bestowed me with one of his treasured nicknames that every runner who completes the Raven Run gets.  My nickname?  "Keystone" as I am from Pennsylvania, AKA the Keystone State.  I have to admit I think it was pretty cool.

I then did a nice solid workout with Levi and Mike, where we got to talk about  running and life and all the Spring Break cuties dotting the beaches.  Hustling a bit as I was late to go to lululemon and Levi had a personal training client, it was nice to flush out the system and do the 8 miles in a crisp 54:13.

In spite of my hustle, Miami traffic made me late to my run at lululemon.  Fortunately, everyone was in good spirits and we had an excellent fun run around the Aventura Turnberry Circle. I got to know the runners fairly well and ask about their goals and running plans. One young girl, Mina, was out on her longest run ever and did a fantastic job.  Mina, we may just make a runner out of you yet!

Back to the store I answered a few questions and signed a few books.  It was a great ending to a wonderful day.  Pictures to come soon of all the festivities but I want to thank all who made the trip to the store. You made my night!

That Levi guy sounds amazing, and raven too.

That's pretty neat about the Raven run. How many names are on the list?