Ending World Hunger - Not Quite Yet 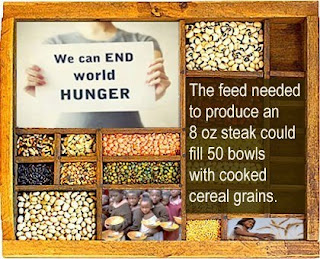 Back in July I posted an article dealing with a graphic which talked about how much water goes into raising animals in America.  If you don't have the time to read the article I will boil it down for you - many infographics are completely full of crap. That is not news at all. I don't even have time to begin to debunk all the ridiculous graphics I see all the time.  However, one made its way to me more than a few times so I felt I had to address it.  Here it is:


"The feed needed to produce an 8 oz steak could fill 50 bowls with cooked cereal grains." Wait.  What? I tried to roll this around for a while before realizing that it flat out didn't make any sense at all. However, it has just enough words in there to stick with someone who wants to say that raising beef is causing the world to starve. That's the mission. Place enough "factoids" in the head of people who don't have the time to actually look up whatever it is they want to agree with and blammo - disinformation has been disseminated.

But I didn't want to trust just my powers of research and rationale so I went to a few sources, one being my good friend Daren Williams who is the Executive Director, Communications at National Cattlemen's Beef Association.  Here were some of the points our conversation boiled down to: 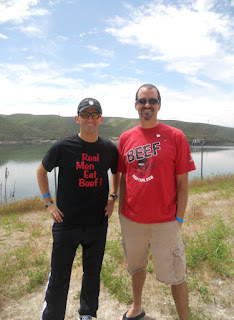 1. We have no idea what this is even talking about. Cooked cereal grains? The feed grain corn which is raised for cattle is technically a "cereal grain" but you would never cook and eat it. It could possibly be used to make corn starch, corn oil, etc. that could eventually be used in human food, but would have to be processed to make it edible for humans.

2. You can take wheat, which is sometimes fed to cattle as part of the ration, and cook it to eat. It puffs up considerably, so it would not take much to fill 50 bowls. Filling a bowl is not really that difficult. I can fill a room with cotton but it doesn't mean much, does it?

3.  Nearly 85% of the land cattle graze in the U.S. is not suitable for cereal grain production. So a good part of that steak comes from cows eating grass that we cannot consume. Furthermore, if we tried to farm that land with grain crops it would be an environmental disaster (for a multitude of reasons I needn't get into right now.) 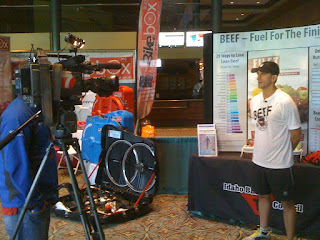 4.  Most importantly, let's ignore 1-3, shall we? Even if we go with the best case scenario of what this message is trying to say, cereal does not come close to providing the same nutrients as beef. We might be able to fill people’s stomachs with a bunch of grain but we would all suffer severe nutrient deficiency from the loss of zinc, iron, protein and B vitamins from our diet. Yes, you can get those from certain plant foods but grains would not provide sufficient amounts. Moreover you can’t grow spinach and kale in say, Nebraska! In other words, even if all land could be used in whatever way we would want to, the end product would still be lacking if it was "cooked cereal grains."

It is unfortunate so much misinformation is out there. We'd like to believe that if it is on a poster that it has been vetted for truthfulness, even if the opinion involved may be skewed. This is definitely not the case, especially when anyone can throw together a poster with some words and a graphic and send it out into the world free-of-charge. (And yes, the idiots who blindly follow people like the Food Babe show I am 100% correct here.)

So, as always, question what you read and here. Even this article. I want you to do the research yourself and if I am wrong, let me know. It's bound to happen someday.  :)
Posted by Dane at 8:32 AM