What I love about the internet is the ease with which one can find information. When the internet first came into my consciousness around my freshman year of college, I thought it was just the most unbelievable thing ever (and still sorta do.)  I had an inkling of a thought that perhaps the instant access to info could be bad if it ever got to the point where just about everyone could say whatever they wanted.  I wasn’t against opinions and the like but realized that some people know what they are talking about and many, many do not. Yet, here we are today where any and every thought can be broadcast out into the ether.

Undeniably twitter and facebook and social media have created revolutionary change.  They have also increased, exponentially mind you, the turds with which we must wade to get to the facts. One of the latest I have seen has to do with the consumption of water that goes into raising animals for food. As the spokesrunner for the National Cattlemen’s Beef Association, I get things likes this sent to me all the time. This doesn't really fall into the purview of my normal ramblings on this website but as it falls central to the food choices I make, and those food choices fuel my exploits, I felt it was important to address it. Check it out here: 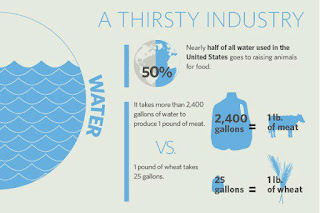 “Nearly half of all water used in the United States goes to raising animals”.

Oh, for the love of Christ.

First of all, what “industry” is raising ALL “animals for food”? The chicken/pig/cow/fish industry? Can I buy stock in that? Second, as nearly one-half of the water used by Americans is used for production of electrical power or thermoelectric power generation (link takes you to the 2005 U.S. Geological Survey) that means that somehow, if we are to believe the infographic, there is next to no water left in America for drinking, showering, brushing teeth, cleaning dishes, watering lawns, washing clothes, filling swimming pools, water balloon fights, wet t-shirt contests, etc.

Then we read that more than 2,400 gallons of water are used to produce one pound of meat. According to whom? I don’t see any sources cited.  However, if you want sources, according to a UC Davis study, it takes just 441 gallons of water to produce one pound of boneless beef—or about 110 gallons for a quarter-pound hamburger.(Beckett, J. L., and J. W. Oltjen. 1993. Estimation of the water requirement for beef production in the United States. J. Anim. Sci. 71: 818-826.) This study takes into consideration the following:


Furthermore, most of that water is water that comes from rain, not from water that is already stored and could be used for other purposes.  Meaning, it is not as if the 441 gallons (which, by the way, is over the entire life of the animal!) is being removed from your drinking water and you are getting less. Besides, do you know a single person in America, besides those in between aid stations in an ultramarathon, who goes more than a few minutes of being thirsty? In fact, I just got thirsty and went to my tap and filled it with a nice cool glass of Dihydrogen Monoxide. The “Industry” did not keep me from doing so. In fact, from the same 2005 survey “livestock water use was estimated to be 2.14 Bgal/d in 2005, which is the smallest estimate since 1975.” So, the amount of water usage is minuscule compared to the demand for lean beef by America's consumers.

Finally, gazing back at the infographic, we see that one pound of wheat only requires 25 gallons of water to be produced. Now, I don’t even need to refute this for a couple of reasons.  First and foremost, how much raw wheat do YOU consume in your normal life? Thought so. Let’s say you do. Where are you getting your protein?  Your zinc? The iron that you need? I am guessing from other sources that also require water to produce.

This infographic, in 50 words, is so wrong or misleading that it took me over 600 words just to begin telling you how wrong it is. But a cute little graphic with the big mean cow drinking up all of yo waters while the poor little wheat chaff which could save humanity if only it could please sir, have some more water, is so much easier to create and understand.

Therein lies the problem with the internet that I saw way back as a freshman in college. I do not think that people are lax in checking many claims before they fully believe them.  But I also know most people will share info before they fully check its veracity.  By then it is too late.  The damage has been done and the continuance of misinformation and ignorance occurs. Perfect example: “Pink slime”.

Remember that little world is coming to an end story a few months ago? Yeah, whoops – people were completely wrong and over-reacted. But do you hear about those inconsistencies and apologies for putting wrong assertions into your head or do you remember, incorrectly, all you thought you knew about what is actually called “lean finely textured beef”? Unfortunately it is the latter.

So, when you are bombarded by the same seemingly innocuous statement, like the infographic above, soon you begin to think it must be true.  People wouldn’t lie directly to you, would they? Unfortunately, many do, without even knowing they are doing so. 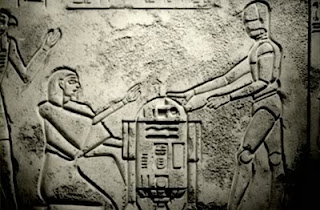 There is a lot of information being thrown at us every minute. We cannot possibly research everything for its veracity and truthiness (thank you, Steve Colbert.) But we can treat claims that seem to be significantly sided toward one side, any side, with a healthy dose of what the ancient Egyptians called “Yeah, prove it.”

The ancient Egyptians probably didn’t call it that.
Posted by Dane at 11:56 AM