Now is the time most make their New Year's Resolutions (for obvious reasons.) I say to forget it.

I once read a quote that stated: “Forget past mistakes. Forget failures. Forget everything except for what you’re going to do right now and do it.”

The reason I like this so much is that it addresses all we really can do. We can only go for right now. We cannot lose five pounds right now. We cannot have all our transgressions and faults end immediately. We can only deal with the present. In running, especially long distance races, there are thousands of seconds to deal with. We sometimes try to think of the race as a single entity, but each one is broken into lots of little fragments. Feel good right now? Surge! Feeling not so great at this moment? Lay off the throttle. 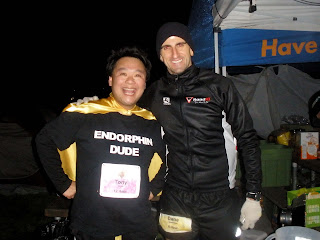 On New Year’s Eve two years ago, in the midst of a lot of challenging things going on in my life, I ran a 6-hour race around a one-mile loop in San Francisco’s Crissy Field. I did not have the race I was hoping to but was fortunate to still post the highest total of miles run that day. However, during the race, both my mental energy and my physical energy ebbed and flowed. When some unexpected chafing occurred, I knew I could only deal with it at that moment. I could not think about whether it would get worse down the road (and oh my goodness, did it, in spite of my efforts to quell its growth.) I had to roll with the punches, so to speak. Randomly my mind would go blank, I would forget my woes and push forward. Other times, my mind would race, thinking about all the things that were currently going haywire and I would have a bad lap or two.

I see the New Year’s Resolutions which people set as being very bold and wonderful. Unfortunately, they are often so broad and far-reaching that they themselves up to fail. I suggest, instead, to set smaller goals and to set them daily. Each day brings its own triumphs and tribulations. Each day must be dealt with differently than the previous one. No one way of attacking life will work for every single day just like no way of attacking a race will work for every single race.

If you have a bad day this year, realize it will be done at midnight. Then you can simply work on making that next day the one that counts.

Good luck on tackling all of your dreams, big and small, in the upcoming year.
Posted by Dane at 11:31 AM