I saw this as a headline:

"For the first time in the history of the prestigious event, there was a tie for first place. After 21 grueling kilometers at the majestic Kualoa Ranch in Hawaii, not even a photo finish – or video replay – could determine the winner." 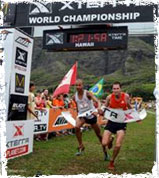 I was hooked and reading.  From the picture they included on the website of the XTERRA page it looked like the guy in orange (Ben Bruce) was a clear winner.  Then I saw this video. Well, that changes things just a touch. 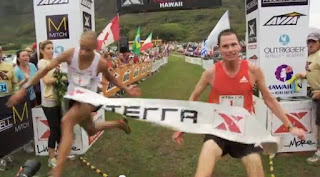 I tried figuring our why Gray drifted ever so slightly to the middle when staying where he was would have been easier for him to do and then it became clear: he was simply trying to go where the ridiculously little erector set of black bars set up after the finish line to direct runners where to go, pointed him. This photo shows Gray, post-nudge, hurdling the narrow entrance to that area that he was directly in line to run through.

This is not to vilify Ben Bruce (although the nudge was kinda bush league.)  People get hazy at the end of races. Watch this video where Joseph Machuka actually punched Haile Gebrselassie at the end of a race when he got passed (throwing exactly the kind of punch you would expect a 120 pound runner to throw.)  Or NYC Firefighter Matt Long, whose story is one to really get you where it counts, still was kind of a dick at the end of his own marathon back in 2009.

No, this is to point out that the sport I love so much needs to stop acting like it is a fourth world country.  If this is the WORLD championship, then for chrissakes get a camera that goes directly across the line.  Don't rely on spectators cameras (Ironman 70.3 in Boise actually used the shot from the guy standing next to me to help determine the winner in 2012) or speculation.  Heck, even the Olympic Track and Field Trials botched this with the tie, maybe we will have a run-off, maybe we won't back in June.

In an era with high-tech camera, super-super-super slo motion replay and all that is available to us, ignoring the fact that Bruce illegally bumped Gray out of the way at the finish, the race itself should have had its own way to determine what was happening.

Or, make it full contact.  That will definitely increase television viewership. Hockey is still in a lockout, right?
Posted by Dane at 3:56 PM