Back while I was in law school, I began running races.  A little 5k here and there with the one near-disastrous first marathon throw in for good measure. I don't give much thought to the those shorter distance races from that time period, even though it is not intentional.

Looking over some unrelated papers from around that time period last night with a good friend my memory was jogged (ha) about a race I did three consecutive years with some friends in the greater Cleveland area.  Called the Blossom Time Run, it was an odd-distance 5.25 mile race in Chagrin Falls, always right around my birthday. I remembered running it twice but when looking for the results, was shocked to find out I had indeed run thrice. Memories began flooding back to me about this course and those races. 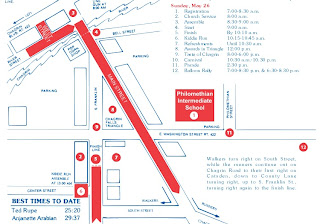 I remember the race more or less shutting down the entire city of Chagrin Falls as well over 1000 people ran it in the years I did (2000-2002.)  I recall the race being rather hilly for the two miles or so while sloping down to the finish with rolling hills the rest of the way. The paper entry form also contained the course map of such a rudimentary throwback nature you could not help but love it.  In fact, here are the course directions:

"Walkers turn right on South Street, while the runners continue out on Chagrin Road to their first right on Catsden, down to County Lane turning right, up to S. Franklin St., turning right again to the finish."

That's it. Now, you have to remember I was in law school all three years I ran this race.  So when reading it I wondered if there was a second left on Catsden or was this just the first right we could make? Does County Lane turn right and we follow it or does it continue on and we make the turn?  Will Franklin Street be up a hill or is the midwest version of "up" meaning either "north" or just "continue along"? Why right "again" to the finish?  Needless to say I had so many darn questions.

One thing was for sure and that was I was indoctrinated into how, as many runners get older, they get better. Some memories:

*In 2003, besting my previous year with a 32:59 at age 26 (I pushed so darn hard to go under 33 minutes that I remember dry-heaving), only left me with a disappointing 5th place in my new tougher age group. I used to have video of this and probably still do somewhere.  Unfortunately, it is on actual "tape" and lord knows if it has degraded over time. That last little uphill was a killer.

* I also vividly recall my best friend Scott Baker, the one who introduced me to the race, running a time slightly slower in his second year than the first before knocking a full minute off in the third year. Then promptly saying he was never running again. (Not true by the way.)

I am happy to see the race is in its 37th running this year. Even with chip-timing the race is done for a measly $20 at its registration. When was the last time you paid $20 for a race?  I am pretty sure you also get a t-shirt (or did when we ran.) and there were clocks at every mile. 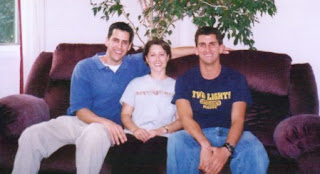 I do hope to get back to it sometime. It would be a great test of fitness to see where I stand now.  By all accounts I should be able to run close to 31 minutes or so. It would be fun too know that a decade later I am still getting faster on some courses.

That is what is so wonderful about this sport of running. I see why people go and run the same courses year after year.  It is not my bag to do that all the time as I love seeing the country and exploring all the wonderful races that the world has to offer.  But familiarity and being able to compare yourself against the years aare too wonderful yardsticks.