I had a Boston Marathon viewing recap all written in my head. It was going to tell the compelling story of Ana Dulce Félix who made the women’s race extremely interesting for a while. Then I was going to talk about how Jason Hartmann, with two top-four finishes in a row at Boston, is unsponsored. Then, well, it happened. 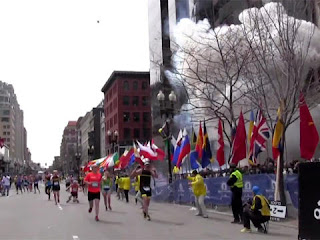 Some raced to be the first to give the body count or provide unconfirmed information so that they can…actually, I have no idea why people feel the need to do that. Others just wanted to know what was going on. Were their loved ones OK? Did they catch whoever did it? Are we really in the midst of another major marathon being embroiled in a tragic loss of life and liberty?

It was a tale of two different races: one that led us up to 4:09:43 and then the one after. As I heard friends and acquaintances doing what they could to take proud stances, refusing to be intimidated, I thought about what was really going on. These bold “we are runners and won’t be deterred” ideas were a little offbase. Sure, the atrocity hit during the Boston Marathon – the granddaddy of them all. But the bombs didn’t target runners. They targeted pedestrians. Fans. Those who stand on the sideline and cheer the runners on. It is egotistical to think that we need to boast about how long runs make us tough and setbacks are parts of our lives. These explosions or attacks (presumably) were meant to devastate large groups of people. The Boston Marathon just happened to be a place where large groups of people would be together with the world watching.

It is also not about the city of Boston or the United States alone. This was attack on not only the 27,000 people running the race and the half a million spectators lining the course, but the 96 different countries represented by its runners. This was attack on everyone.

Think about when someone tries to harm you or cut you down.You fight back.  But if they do the same to someone you love, the old Mama Bear instincts kick in and you lose your crap, so to speak. Whoever did this atrocious, heinous, and cowardly deed wanted to indiscriminately hurt you, the others “you”s from around the world, and all the people who support you. This was attack on your family, both the one created by blood and the one created by sweat equity.

When Sandy hit NYC last fall and the marathon was cancelled, due in no small part to potential threats from those hurt towards the supposedly spoiled runners, as a community we were shocked. Undoubtedly, there was going to be a selfish person or two who would only think of the hard work they put into the race and of no one else. However, 99.9% of the other runners were dismayed that people could see us this way. As a clan, a family, runners are some of the kindest, giving and charitable people on the planet. Call us weird for running in the snow or at night or for 100 miles or more. Call us obsessed with the latest shoe or watch. But calling us out on our temperament was the thing that stung most. 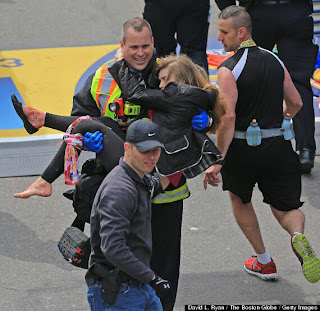 Yet here in Boston, videos and report show runners who just finished, or who were about to finish, rushing to the scene of the explosions. They weren’t running away but rather toward the danger. Apparently, while not confirmed, some runners kept right on running to hospitals in case blood was needed. Mind you, these are people who just ran 26.2 miles. They are depleted, wrecked, and often without the energy to stand.  But they forgot about their chafed body parts and dehydration because some else needed help.  While the Boston Marathon is set up to handle all kinds of maladies from the race itself, and I am sure they have more than a few doctors and nurses there, it is not a M*A*S*H* unit. There is video of runners, some doctors, some nurses, and others who have done something in the medical field, immediately helping while still wearing a bib number.

There is so much left to find out about this but honestly there really is never going to be enough answers. If you are looking for the answer to the question of “Why did this happen?” as the young son of a friend asked his mom (who just so happened to be running the race) you are never going to get a satisfactory answer. None will justify the dozens seriously injured and the at least three who have died.

I heard someone say the world is gone to the wackos. I say it is the exact opposite. The world is a fine and caring place which is populated with billions of good people. Unfortunately, their acts are often undocumented and build over time (Just look at this list of people in Boston opening up their homes to people who may have no way to recover their belongings or were evacuated from hotels.) No, it is the fanatic, pitiful few who have to be heard in loud brutal ways. Their acts grab the spotlight but often fade away. Violence and terror inevitably grab out attention because of their nature.  But our nature, as humans, is to cope and move onward. Those natures prevail. 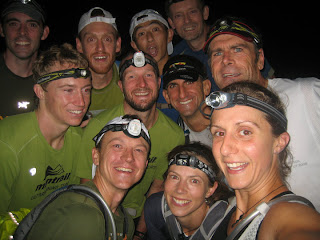 Now, even after saying this is not about runners, I have to recant a bit.  You know what – it sure as hell is about the runners. This is the Boston freaking Marathon. These are MY people. These are the ones I can identify with the most.  Someone asked me if I knew anyone who was running today. I said, yes. I know all 27,000 of them. I might not know their name and I might not have even met them but I know their struggle. I know the sacrifices they have made and the challenges they have overcome. I am one with them.  Meet a runner and instantly you know you have something to talk about for hours.

So I take all of this extremely personally.

While obviously infinitesimally smaller than what happened at 9/11, the events in Boston immediately took me back to that tragic day (I touch on this in my second book at greater length.) I remembered how I coped with what happened when nothing else seemed to work – I went for a run. Unfortunately, I got a foot infection the other day swelling my foot to twice its normal size. I couldn’t stand on it yesterday.  It is far better now but no running for a day or two.  And it is absolutely freaking killing me. I know changing my profile picture doesn’t do anything to help anyone.  I have limited to zero belief in prayer to do the same. But running could at least help me out a bit.

I have run Boston on two separate occasions. I have often said I don’t like to repeat races too often simply because there are so many other races in the world to enjoy. Well, I have a feeling I will be there next year. I need to create a better, much more wholesome, and more recent memory than the one that is sitting with me now.

Thanks for the thoughts Dane. You did such a great job at collecting your thoughts so quickly and expressed what I am feeling in a much better way than I ever could. I have felt what those runners were feeling during their race. I can't imagine the devastation. I hope your foot heals quickly.

<a href="https://www.facebook.com/bastiatsociety>People, in general, are fantastic and beautiful. Some are evil though.</a>

Thank you Dane for sharing!
I can sign under every word!
And we plan to go to Boston again!
We feel we need to show our spirit to those who is attacking our LIFE, our SPIRIT, our TRUST. We should not let them win!

Thanks for your words Dane. Looking forward to seeing you this weekend in Salt Lake City.