I originally intended for this review to come out last week.  On Patriot’s Day to be exact. Yeah, nuts to that.  Then I played around with it some more to get it just right. I realized I hadn’t really done the review justice and wanted to tinker.  The reason I felt that way was because the shoes I was reviewing were just that fantastic. 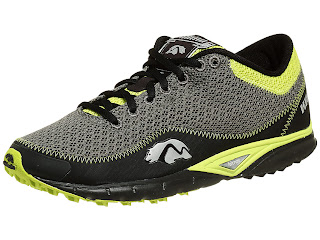 So here in my review of the Karhu Flow 3 Trail.

When I read reviews in other magazines about shoes, I often wonder how long the testers wore the shoes, in what pristine conditions they traversed the ground and for many days they ran in them. To me, a shoe feeling great for a four mile run down the sidewalk doesn’t mean bump.  Even though the vast majority of my miles are on pavement, I want to know what the shoe does in performance gear. This is especially true when I am getting off of the roads and onto the trails, something I don’t race in too often.

With the Karhu Flow Trail, I definitely decided to wear it on a few runs prior to racing in it.  But it was the races itself that mattered to me.

I originally planned to do four rather distinct and different races in the shoe to really give accurate feedback on how it performed.  Then a nice little case of Staph infection grabbed ahold of my foot and the final test, the 20 mile Peterson Ridge Rumble in Sisters, OR, had to be canceled.  So the sample size of races was down to three.  But what a three they were.

First, I took part in the Fuego Y Agua 25k in Nicaragua in February.  I had a pitiful race damn near dying from dehydration. Raced upon and then back
down a jungle volcano the terrain was not only mushy on one side but scree-filled on the other. In fact, it was about as dry as a popcorn’s fart. The juxtaposition from one side of this volcano to another was hard to understand until you ran it.

Second, in my ever-increasing desire to jump head-first into shallow water, I took on the X-Trifecta Winter Triathlon. Downhill skiing (never once done it) followed by mountain biking (never once done it) followed by a trail run (have done it.)  Well, considering the shoes doubled as my footwear for the bike and the run, they got double duty that day.

Throw in the quarter mile of snow and half mile of pavement on the “trail” portion of the run and these puppies were tested in many terrains.

Finally, the Gorge Waterfalls 50k in the greater Portland area was the final test. Road, trail, rocks, roots and basically hiking up the side of a large hill (twice; both ways) were what the Flow Trail had to encounter.

To say the shoes passed with flying colors would be a massive understatement. Each one of the races, in and of itself, was a testament to the flexibility that the shoes were able to give me in comfort, terrain-grabbing-ness (industry term) and plain ole not-thinking-about-my feet. When it comes to my shoes, the one thing I want to do, above everything, is never once think about them. When pushed to think about what I have on my feet because I am lacking in any foot pain, blisters, abrasions or anything negative whatsoever, that is when I know I have a shoe that
works.

For technical specs and things that I’d rather not think about, check out the Karhu site here.

But here are some quick facts and details from the Karhu website.

"Rugged enough for the toughest single track trails, yet accommodating to road surfaces, the Flow Trail features a counter-directional T-lug design equally adaptable to both uphill and downhill running. The lower profile maximizes the feel of the terrain without compromising the Fulcrum Technology's ability to increase propulsion. A durable waterproof mud guard protects the runner's feet from harsh wilderness elements including creek crossings, rocks and roots while the faster transition through the gait-cycle makes it easier to flee from angry moose."

For my money, this is the shoe I will have on my feet when I go off-road.  It should be for you as well.
Posted by Dane at 2:27 PM