I have run a few races that have ended either at or near midnight in the past few years.  But to my recollection I had never ran one that started at midnight. When I first started doing some races a few years ago I always thought the idea of doing the 4-miler in Central Park at midnight would be the best way one could ring in the New Year. But time passes and things just don't happen. So, I decided to make it happen. 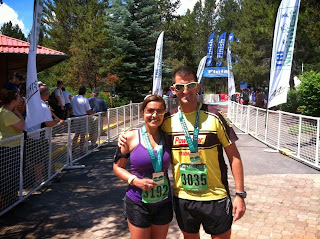 Even though I had just ran a marathon on Saturday, I decided I wanted to take on the First Run and Walk 5k, put on by the people at AA Sports. AA Sports run and work with a whole slew of races here in the Pacific Northwest with their signature event being the Pacific Crest Sports Festival Weekend.  Their marathon in Sunriver, OR is one that never disappoints even as it challenges. I have run it twice (in 2006 and last year) and have no doubt I will be back again to take on one of the other events they offer there. Given the events they put on, I knew this 5k would be great. But I wasn't expecting it to be as sweet as it was.

Given that the race is run just "down the street" from where I live in Portland, I thought a good way to end 2013 would be to run the three miles to the start. Then I could race the 5k, run back home, catch a few hours of shut eye and then take part in another 5k another mile away. Busy few hours.

As I jogged down to the start of the race, Portland was eerily quiet. I don't live in the heart of downtown but rather in the Hawthorne section which is not known to ever be particularly quiet or tame. This is the largest city I have ever lived in and I was expecting more on a New Year's Eve. I figured when we got to the start there would be some more revelry. I didn't know how much. 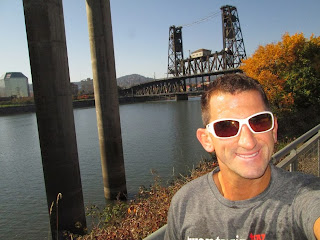 Crossing the Hawthorne Bridge as I have done so many times we could see people all walking in the same direction we were heading. Part of the allure of running this particular race is that the course was comprised totally of a portion of a run I have done dozens of times while living here in PDX. The familiarity of having run a course multiple times has a value hard to state.

When I got to the festival area, I was astounded. I expected something but not this. There were vendor booths and a DJ with a video screen. Food and drink were all available as was oodles of tables and chairs and those little heater lamps. As it was barely below 40 degrees and no chance of snow in sight, there was actually a little snowmaker blowing the frosty stuff into the air in one area for those to get in the holiday spirit. There were large lit snowflake lights hanging from the rafters of this outdoor pavilion and tons of people dressed in odd costumes. It was pretty fantastic!

I was now in the mood to race.

I had no idea what to expect out of my legs and honestly was a little tired. I am a total night owl but even that was making it hard to get ready to race at midnight. My goal was to run right around 19 minutes which given the fact I had run a marathon three days prior and am not that fast to begin with would make me happy.

We lined up at the start where some directions were being given but there were far too many people talking and far too many directions being throw at my head. I knew I wouldn't be first, I knew it was a loop around bridges and I knew it would hurt for less than twenty minutes. Everything else would sort of work its way out. The clock on 2013 counted down to zero and as 2014 began I was off and running. 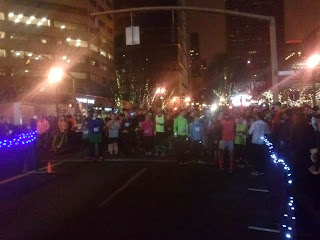 As we sprinted down the sidewalk along the Willamette River two things were abundantly clear to me: the winners were going to beat me like a rented mule and I cannot stand the smell of marijuana.  I jokingly refer to getting a contact high on certain portions of this run due to Oregon's apparently lax marijuana laws and far too abundant chosen-homeless (by this I mean young riff-raff who probably are sitting on a trust fund but find skateboarding and being all Alexander Supertramp to be worth more than contributing to society.)  Well, the latter were out in force this night and clouds of cold breath and clouds of pot were intermingling without prejudice. I have been an old soul (cantankerous and moody) my whole life so getting drunk/wasted/what have you have never been on my list of things to do and my tolerance for those who like it is even less. It is near zero when they are getting in my way.

This first portion of the course had numerous people cheering us on but unlike other races where I have no fear of anything stupid happening, I wasn't too sure about these people. I was expecting a Vanderlei De Lima moment at any point. Fortunately, nothing that bad happened. However, as we streamed in one direction, others were racing us in heels or party hats and even more idiots were running at us in the other direction blowing horns and the like. All of a sudden a couple who were jumping up and down and screaming bounded right into me. I put my arm up instinctively and took a hard whack on the forearm. Instantly it stung like the dickens and I was taken aback. But I had no idea what to do but move forward.

Be it known I am not blaming the race for not "containing" the people on the walk. I am blaming drugs, alcohol and stupidity. I have no idea what body part or device of theirs hit my arm but I can only hope that whatever it was, it broke. Because it felt like my arm had.

Toward the Steel Bridge we went and I searched for a mile marker. When it appeared it said I ran a 6:25.  I knew that wasn't right and hoped the second mile marker would make up the difference.

In my so-called "Bridge Run", an 8.65 miler I have done more than 50 times in 2013, this portion of the run is where I catch a bit of a stride and really open my legs. There is a slight downhill to bring runners to almost exactly river-level and then 100 yards or so later, another ramp to take you back up. It seems I was settled into the position I would finish the race in now and I was just trying to continue to make it hurt in a good way.

To be honest, running marathons and long-distance stuff is, to some extent, easier than running fast 5ks and 10ks. These things are so short that if you race the way you should, they hurt the whole time. Marathons are 20 miles of controlled anger and then six miles of heavy running. It is clear why they are so popular. The marathon or half-marathon carries so much more cache without the same hurt. Heck, I tell someone I am running a 10k and they say "You can do that in your sleep!"  I usually respond that if you run it hard enough, even a 400 meter race can leave you wrecked all day.

As I saw the next mile marker approaching I knew I just had another 6 minutes of pain to deal with.  As expected, a 5:40 on this mile meant I had more or less run two 6:15s in a row and the first marker had been a little off.  Nevertheless, this was all just little slower than I had hoped for but not too far off.

As we went under and then over the Hawthorne Bridge I knew there were just a few more minutes until this would be all over. We passed an aid station, both unexpected and entirely unnecessary for a 5k but appreciated nonetheless. On occasion I have been running across this bridge when the alert goes off telling us the bridge will raise any moment. I turn it into a full sprint to beat the arms coming down obstructing traffic. When I do so, I count the steps that it takes to have me traverse certain cut-away sections in the sidewalk below.  Here, even feeling like I was ready to die, I was running faster than that during workouts. That made me happy.

Down the bridge I went and I heard footsteps behind me. One runner was trying to make a pass. However, he was doing it on the wide side of a turn we had to negotiate before we headed into the final quarter of a mile home. I mentioned race-tactics in my Live Ultimate Quarter Marathon race and here I was using them again. If he was going to pass me it was going to be after he ran extra long around a turn.

I hugged the curve and went under the bridge again. The runner behind evened himself up with me and pulled a few yards ahead. I could see where we were ending up ahead but I was not exactly sure how we got there. As there was also a 10k going on and in a kick to the ego there were a few runners doing that who were still ahead of me doing the 5k, I wasn't sure which direction to go. The runner in front of me now chose one direction and I another.  At the last moment a volunteer shouted for me to go the other direction and I swerved. I didn't lose more than a second but I lost all momentum. Drats.

I finished just a few seconds behind the runner in front of me in a time of 19:06. I placed 14th overall which was not too shabby. There were some freaking speedy guys out there with the overall winner clocking a ridiculous 14:54. Wow.

As it ends up, for overall placing purposes, this guy had started behind me so he actually was faster than that anyway, so even if I out kicked him it would not had mattered. But it would have mattered for age group awards which usually go by clock time and sure enough he was in my age group. However, I was focused on too many other things to worry about awards at this juncture.

I immediately went to get my arm checked out and it was already swollen and a little purple. I got ice on it and went back out to cheer on my best friend Shannon who would be doing the whole jog bag and forth and double 5k races in 8 hours thing. She finished super strong in what would end up being a new 5k PR for her. Not a bad way to start out the year!

A quick drink and some chicken noodle soup and my first race of the year was in the books. In spite of the forearm contusion I was extremely pleased with how the race was handled by AA Sports. Kudos to them for putting on such a great event.  If I am in town at midnight of NYE this year, you can count me down there running again.
Posted by Dane at 1:53 PM