There are a few times where I really wish I had a camera with me during a race and this was one of them.  While I doubt Mt. Tabor, as awesome as it is, will ever make me fall for it the way Liberty Park in Salt Lake City did it is a beautiful, challenging and fun place to run. The middle of last year I almost paid a ridiculous sum of money to run a one mile race up at the top of it simply because it was so close to my house and would be rather unique.  I instead ran the Trail Factor 50k in a torrential downpour, got some of the worst chafing I have ever had and had an excellent time nonetheless.

After racing in downtown PDX and then slogging the 3 mile hill back to my home, ingesting some quick calories, showering and passing out, I knew I had just about 5 hours of sleep before I had to be up and ready again.  As I was out of town for the official packet pickup for this race because I was too busy winning a marathon in Seattle (BAM!) I knew I would have to get my packet the morning of.  There are few things I am against more than morning of packet pickup but there was the only choice. Ideally, I would have a simply woke up about 45 minutes before the race, showered, and jogged the mile from my apartment to the base of Mt. Tabor.  Alas. 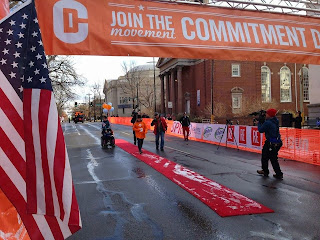 Arriving at the race start I didn't even know if there was a race going on.  Pictures from other Commitment Day races across the country have shown mass signage, music, bands, stages, etc. Here, I saw about 20 people standing in one line in front of a tiny tent. Don't get me wrong; one doesn't need a lot of frou-frou stuff to make a nice race. I just expected a bit more.

Unfortunately for the people manning the tent, apparently the computer system went down and it was taking eons to process each individual person. They eventually formed two lines; one for those wishing to have a time and one for those wanting to do it as a fun run. Well, I got one of the cheapest races and found a discount and I knew I wouldn't want a "fun run". Those who paid $40 probably didn't either. But two lines formed.

I was looking forward to this 5k as I knew it would be one of the most challenging 5ks out there. With all kinds of loops and turns and hill climbs, I was ready to do some battle.  I had my Karhu Trail shoes on, knowing the course would have at least 33% trail and I wanted to be able to do some mudding.

As time drew near for the race, the RD turned on a portable speaker to address the crowd. With just 78 timed participants (and maybe half that many untimed) he could have probably just talked to us.  He informed us of the reasons for the downed computer and the sparse festivities.  Mainly neighbors in the Mt. Tabor area did not want music playing in the park at 9 a.m. on New Year's Day. I can understand that but it is not like it was 6 a.m.  Also, for reasons not explained, the course had completely changed and would be two loops of essentially the same course, all on road.  I normally love road running; just not in my trail shoes.

They say you can't judge a book by its cover but "they" are often wrong about most things. I looked around at my competitors and immediately picked out the two who were going to give me the most trouble. We lined up in front of an extremely narrow starting chute and  one family had no problem butting their two elementary school children in the front of the chute.  No this couldn't possibly cause any problems. Metaphorical gun was fired and away we went.

Race:
Right out of the gate, after hurdling said toddlers, one youngster shot down the hill.  this would be a great start to this tough course because of this little bit of downhill but the road was slick, there were curves and I was still barely awake.  When I ran a t a 4:31 pace for about 100 yards just trying to kep the youngster in sight, I knew he was going to win the race.  Half of a mile later when the course had stopped going downhill, flattened and began its first climb, the other runner I knew would be tough to race passed me as well.

As we made this first loop around the upper reservoir of Mt. Tabor the fogginess of the mountain was nearly thicken enough to taste.  It was eerie and gorgeous.  Suddenly, as we edged our way up the first big hill, the sun broke through in spots. You know those pictures you seem with streaming sun through holes in caves?  That is what it looked like.  Almost made me forget we were climbing a monster hil in a sprint race. Almost.

At the top of the hill we were instructed to go down the other side. I knew this meant a nice little respite but then another climb to the finish.  We were told that on the second loop we would cut off before this downhill and just head to the end of the race.  That was all I could keep my mind on right now.

First place was untouchable but I was still holding hope of catching up to 2nd place.  I could see there were some other runners who were surprisingly (to me, at least) close to me.  I used the final downhill here to close the gap a touch on 2nd place and hopefully open it more from my trailers.  Climbing this hill to the end of the first loop was a good feeling.

the second loop allowed even more of the sunlight to stream in from above.  I have fought a never-ending battle against the idea that Portland is rainy ever since I moved here.  It baffles me that logic, data and actual empirical evidence get outweighed by hysteria, bad recollections and misinformation.  This was a perfect example of that.  It was 40 degrees on January 1st with beautiful sunlight warming our cool skin. Yet I know people will remember the morning fog as rain and then later they will remember it was 18 degrees or something. 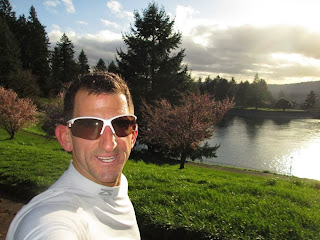 By now it was clear I would take 3rd place.  I just needed to get up one last big hill.  At the top I looked for the sign telling us to trun to go down to the finish.  There was none.  I more or less stopped and asked the volunteer: "Second loop?" and she pointed where we had gone for the first loop.  "Are you sure?"  She nodded and pointed again.  I knew she was wrong but I could see neither first nor second place had taken the way to our left.

I started heading down the hill and looked at my watch.  Yeah, this was the wrong way.

Heading down and then finally back up hill to the finish I was wrung out. I saw the other two guys shaking their heads as they looked at their watches.  Then not long after I finished, the first woman came through.  I turned around and saw that runners were now coming from both the right finsih and the wrong finish. the results were, for all intents and purposes, useless.

My time for the 5k was 23:19 but when measured, I ran 3.6 miles. That pace would equal a 20:04 for a 5k but the extra hill took more out of me than that allows. So, for the sake of reality, I ran 2 19:xx 5ks a few a hours apart with about 8 other miles of running in between just about 72 hours after finishing a marathon. I'm not complaining.

I am also not complaining about the race.  It wasn't particularly well-run, it was the wrong distance, the volunteers weren't exactly well-versed in the most important of their jobs but it is all ok in the end.  That extra half of a mile  will go in my log book, will be good for my training and makes for a good story in the end.

All told, life is about good stories.  It is the bumps along the way that make for the best cliffhangers.  Although, I wouldn't mind some smooth sailing, especially in the weeks ahead.  Stay tuned!

I love how much you love Liberty Park.