I had been contemplating being elsewhere on this weekend but when I found myself staying home instead, the notification I received from the awesome people at AA Sports about the Heart Breaker Half Marathon popped into my head.  Given the great races AA Sports puts on (have run two in the past year at their First Run and Pacific Crest Marathon) I immediately signed up.

One of the first things I noticed was the challenge they had in the middle of the race. You see, from mile 3-4 there is a big honking hill. As such, their Heart Breaker Hill Challenge was to award the top 5 male and female runners who climbed this baby the fastest. I knew, given how badly I run uphills, it would not be me.  But the challenge was sort of the forward thinking AA Sports does with their races. In today's almost saturated world of racing, you have to do something different to catch people's attention.

The week prior to racing here in Portland, we received some record snowfall.  It was all melted by mid-week by some heavy rains but those rains threatened to make racing life miserable on this weekend.  In fact, for one race I thought about doing around Hagg Lake, the muck fest Saturday's rains brought surely made for some tough times for runners. I drove to the race the morning of and passed over the hills which are so often socked in with clouds on Portland's west side. Today was no different.  In fact, some rain began to fall pretty hard.  But after passing through the tunnels to the other side it was like a different world.  Blue skies laid in front of us and the clouds were behind us. Now if only they would stay this way for a few more hours!

The rain was holding off as we pulled into the parking lot of Liberty High School. Races that start at schools are usually nice because they provide shelter and bathrooms. While it was not raining it was still a bit chilly to be standing around. I knew it would be plenty warm during the race but right now in shorts and a shirt, I wouldn't have minded a roof over my head. So in we went.

With just enough time to warm up a bit, use the bathroom and get ready to head back out, I took advantage of the opportunity. As I hustled toward the front I had a tiny woman step right in front of me. I completely stopped myself and made sure even though she ran directly into me that she was OK. I then hopped into the starting corral seconds before the gun sounded. The woman took two more steps and then, very passive-aggressively stated under her breath "No, I didn't need that ankle."  I don't think she was expecting me to still be standing there. Here's a thing about me: I thoroughly enjoy calling people on their crap. I try my best to curb it but when you mix said crap with attitude it is hard for me to stop. So I looked her right in the eye and said. "I heard you.  And I said I was sorry even though it wasn't my fault. Was that not enough?" As she stammered something completely b.s. about "totally kidding" she was saved from further embarrassment by the crack of the gun. We were underway.

I simply wanted to get off on the right foot with this race and try to break 1:30 overall.  I knew with the big hill and my less-than-stellar calf, this would be a challenge. It was helped greatly when my first mile went by in roughly 6:30. It felt good but not great. I could definitely tell I was working. I had looked at the elevation profile for the race and noticed that while there was indeed the big hill all of us knew about, the race was filled with a series of undulating risers. Nothing too hard singularly but put together they would most definitely wear one down.

We raced down a breakneck hill on a curve and found ourselves going flat for just a bit before another riser. Two 90 degree turns later and we could see the formidable hill in front of us.  I was trying to decide what I wanted to do. Did I want to take what would be an outside chance at best to give it all I had and hoof this hill or did I want to play it smart and try to keep an even keel. The fact I was a little tired, not feeling great and mentally not really in a zone made the decision for me. I would be taking it "easy."

More than a few runners passed me going up the hill which was not a surprise. I figured more than a few of them would be dying later on. I can say that was indeed the case. All told, running a very conservative pace, I was 28th up the hill. That pleased me. Well, it pleases me as I am writing this. It hurt like heck at the time. 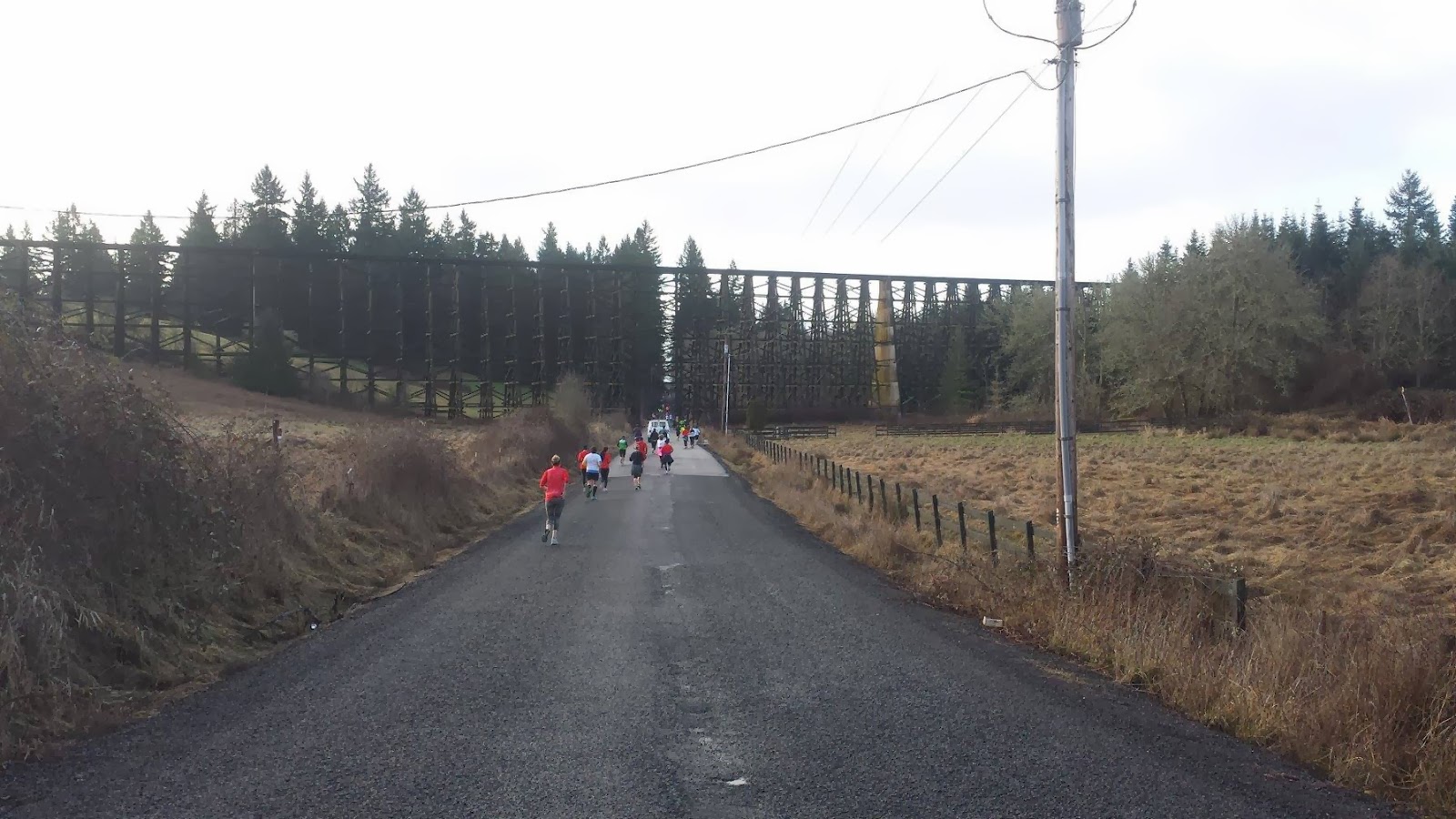 Almost immediately after cresting the hill we went on a break neck downhill jaunt afterward. Pretty sure we lost the entire elevation going up in half the distance going down. Even a runner who likes to run downhills like myself won't make up much time on such a descent. Yet, I did make up some ground other runners in front of me. As the course straightened out we came upon this awesome railroad trestle. (Bummed I can't find a picture of it online as it was very impressive. Edit: Thanks to a reader named Janna's friend Jennifer, I now do have a picture!) Also, for the first time in the race, I didn't feel like quitting.

Around this point I began no longer caring about time and began racing a few individuals. From now until the end of the race, there were five of us who would all lead the group at one time or another. We wouldn't travel in one large pack but rather get stretched out, with one runner seemingly taking an insurmountable lead, only to get drawn back in by another runner or two.  Then it would accordion out the other way.  It was very interesting to me, even in mid-race, how this sort of cat and mouse can happen. Also, how each runner has different strengths that you can exploit, or be wary of, while also trying hard to do your best with your own.

There was the woman who was strong on uphills but not so much on downhills. There was the blond gentleman who was the exact opposite. There was the youngster that hated to be passed and would sprint ahead to get back in front of you a few times before faltering and falling back.

We twisted and turned while the wind began to pick up and the sky went from sunny to ugly and back again. Even if it did open up right this minute I felt it had done us a solid by staying dry for the first 8 miles.

The course required us to make another loop of the section we started out with, taking out the big mountain in the middle. While I wasn't exactly looking forward to the series of hills in store for us, I at least knew what was in store. The chess game with the racers around me continued and on a few occasions I felt I was left out of it. Then suddenly either I surged or they fell back and it was interesting again. I knew I wasn't going to get a time I would be particularly pleased with but at this juncture I wasn't too concerned.

We were passing runners who were on their first loop of this course and you wanted to let them know that it was tough, it would hurt, they had to do it again, but it would be all worth it in the end. But you can't breathe and stopping to tell someone about the upcoming parts you have conquered is probably bad etiqutte.

As we neared the end of the loop, and what I thought would then be roughly half a mile or less of a hard push to the finish, I made a move past two runners. I tried to make it definitive so as to not leave them with much hope and I thought it was substantial enough. Then I learned we had over a mile left until the finish.  I mad misjudged my kick and started too soon.  About a quarter of a mile later one of the runners passed me.  I did all I could to stay on his coattails.

Heading across a field and onto the track we started at, I figured I did not have enough real estate to try and catch him.  However, when we got to the track I saw the finish was on the opposite end of where we started.  But the relaxation I had settled into thinking defeat was eminent had given him too far of a cushion. While I tried to make a push he was just too far. So I fell back and enjoyed the final loop around the track.

I finished 23rd overall in the race in a time of 1:33:14. I thought it was higher and I see two females who had faster times than me had actually finished behind me. But their chip time was faster given they had started behind me. It didn't bother me but made me happy to know my counting skills were not diminishing. 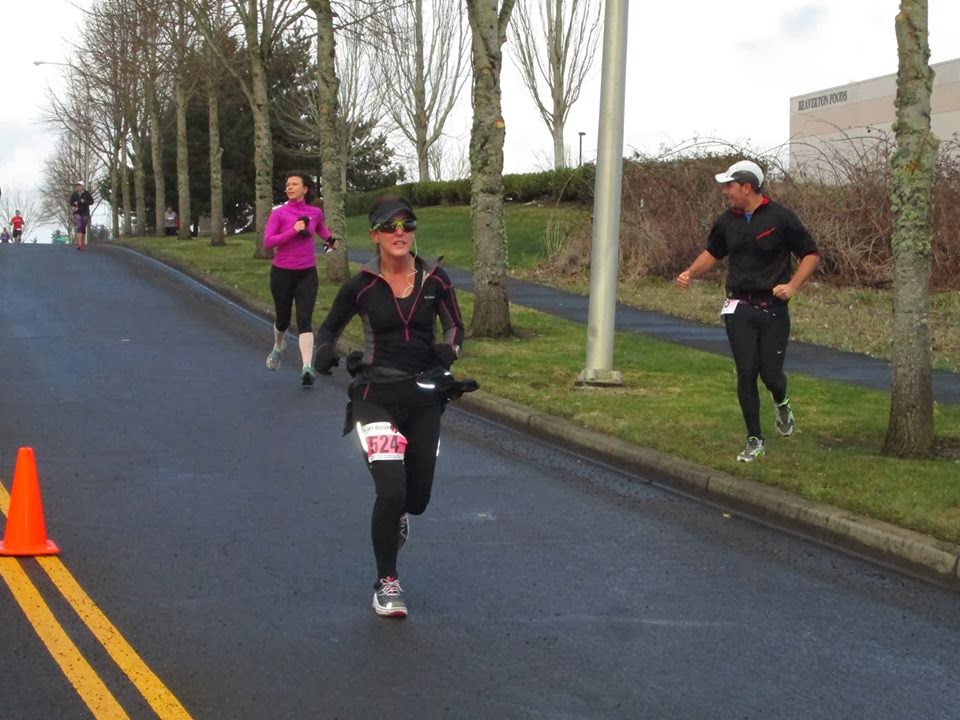 After a quick shirt change I ran out to see where my best friend Shannon was on the course. Lo and behold after not too long of waiting she came streaking down the road. Well, she was wearing clothes but going fast. I ran with her for the last little bit, knowing full well she was going to smash her half-marathon PR on a course not really conducive to 13.1 personal bests. She nailed it by over 7 minutes and barely looked winded!

The post-race party back in the school was warm and comfortable with strawberry and I think waffles for the runners. A live band was playing and people were just having a wonderful time.

Good job to pretty Shannon! I want her running top. It's cute.

Glad you guys had a nice race! It was a fun recap to read.