A little history for you here.

My father was crippled in a hunting accident right before I was born. Complications from numerous surgeries and sundry other events led to massive problems with his legs and their circulation. Then diabetes set in. Growing up, I saw he was often wearing compression socks to help with the blood flow through his legs. If I had been a runner during that time, I might have drawn the connection between what the socks did for my father's legs and what they would do for a runner recovering from a strenuous workout.

When I first saw compression socks a few years later, I thought they were just throwbacks to the 1970s and wondered if runners would soon be wearing disco rollerskates as well.  Since that wrongful first impression I have tried a variety of compression clothing and one I really enjoy is one that many runners know very well- SKINS.

For those who do not know about compression clothing, the purpose of the product is to improve oxygen delivery to muscles, speed lactic acid removal and stabilize the lower leg for greater muscle efficiency.  But do they help race performance?

In the interest of full disclosure, studies have been mixed with regards to actual running performance.  However, those same studies reveal runners have a faster lactate recovery rate after exercise when wearing the compression socks than those who do not. But anyone can read studies and when I posted a recent picture of me wearing SKINS during the Whidbey Island Marathon and was asked how they worked for me 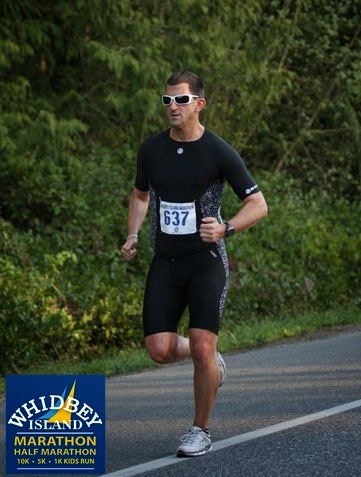 by a number of people, I felt my experiences could be shared.

First and foremost, when it comes to traveling and running, I am definitely well-versed in the area.  I spend way too much time immediately after racing neither taking ice baths or stretching (things I probably would not do anyway) but rather cramming my 6'1'' frame into planes built for people not 6'1''. Tight legs?  Check!  Sore muscles?  Double check!  I am like a walking experiment for whether compression clothing works for recovery. And without a doubt, I no longer get on a plane without wearing my SKINS gear.

With regard to whether the products work during racing itself, I feel it depends greatly on the race you are participating in. I do enjoy the way the clothing provides support for the muscles and in cases where the weather might be a little cool, the shirts keep the chill at bay.

I would highly recommend SKINS compression gear to anyone as it is not only highly functional but quite stylish as well. There is nothing wrong with wanting to both feel good and look like an X-Men!

That is why I am honored to be a new member of the SKINS team as one of their featured athletes.