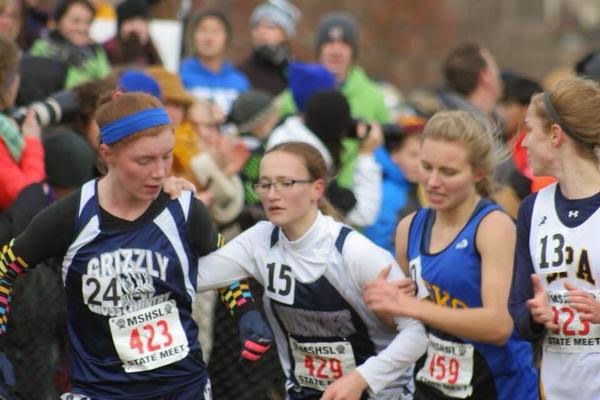 Tierney Winter and Kailee Kiminski helped freshman Jessica Christoffer over the finish line in the Minnesota State Girls Cross Country meet. Then they were all subsequently disqualified

High school cross country rules state you are not allowed to assist another runner. Looking at the situation makes one wonder, should Winter and Kiminski be disaqualified for their heartfelt gesture?  Absolutely. It is against the rules. Should this rule be applied liberally at best? Absolutely.

I have been pondering this rule ever since I heard about this result which took place last weekend. Rather than go with the knee-jerk reaction and say the ruling is ridiculous (which it is) and these lovely lasses should just be allowed to run, I tried to figure out the reasoning behind the rule. This reminded me of an event a few years ago where runners were disqualified at the Lakefront Marathon for a litany of silly reasons. I don't blame the officials who applied the rules or the directors of the races who abided by those rulings. I don't exonerate the runners for not following or knowing the rules. I do, however, have to wonder why they even exist.


If you are assisting another runner in a race, there seems to be no way in which this can benefit you. The only thing you could possibly be doing is harming your result, your team's result, and the overall score. Perhaps it is that last thing where we find our answer. The rationale behind the rule may be that by helping the runner, this is affecting the outcome of all the runners coming in behind you. I guess that sort of makes sense. Or maybe it is so officials can ascertain the severity of the injury in the downed runner. Unfortunately, that is all my brain can muster as a reason.

Regardless of the end result of these rulings , you have probably heard of similar helpful gestures in other sports.The one with the girls carrying the softball player around the bases gets me every time.(Apparently in softball you can not only assist but literally carry your opponent the entire way to home plate.) This one might hit really close to home since I too only hit one home run in my entire baseball playing career. I can actually take you to the exact spot where it landed on the Babe Ruth playing fields near  the rusted hull of the Cytemp Steel manufacturing building in Titusvillle, PA.

But what surprised me in doing some research for this post was that these girls weren't even the only girls on the same weekend who got disqualified. In neighboring Wisconsin, another runner helped carry an opponent over the finish. There is an epidemic of selflessness! Let's quash that with more rules which make no sense.  (By the way, looking for the link about the softball players I posted above, I found that the same action happened again in another game just this year. Let's just say this has been an eye-opening night of link searching for me.)

Look, I am not saying these runners should break the rules. However, many rules simply seem to have no real reason for existing, at least on a non-elite, non-professional level. But if it takes a few girls with the cojones to not care about a result in order to get light shone upon some archaic rules, then I say kudos to them indeed. Fortunately, their solid people-being has not gone unnoticed.

When asked why Winter and Kiminski helped the downed Christoffer, Winter replied "Just to be a friend.  A friend of a runner, I guess."

The world is probably a much better place because these girls are in it.