I thought about writing a post to dispute the ever-persistent "Concrete is harder on your legs than asphalt" debate. Then when doing research I saw an extremely well-thought-out, scientific assertion (which encapsulated many similar findings) showing they are essentially equal. Following it were comments such as:

"Very interesting stats, but I know my brain tells me that asphalt is softer."

"I'm not buying this. Physics aside I once read concrete is as much harder on the legs than asphalt as asphalt is harder than dirt or grass, and I believe it."

I then realized writing a post trying to convince people one way or the other is probably a fruitless endeavor. If people are not going to listen ("physics aside"?!) they are not going to listen. It is like when someone denies climate change, adds "Look, I am no scientist" and then goes on to refute the scientists who universally agree it is happening. If you believe concrete is worse for you than asphalt, I am not going to change your mind.  Like a political debate, no one has ever changed from Republican to Democrat (or vice versa) when showed the other's stance. 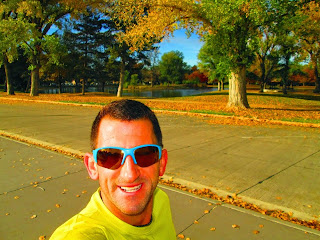 So, rather than waste my time on a blog, let me sum this up thusly. While there are some things which make asphalt better (less dog crap, less uprooting by neighboring trees), if you actually are not so set in you ways that you will allow physics and facts to overcome "Well, I just know my knees hurt more" suffice it to say there is no difference between the two when it comes to hardness and impact on your knees, legs, muscles, etc.

The same goes for trail and dirt which, actually, given their often uneven nature, roots, rocks, etc are more prone to injure you in other ways like ankle turning. I know this goes against all those who think trail running is the one true Lord, but don't argue with me. I am not physics. I am just a guy who has run countless miles in the past decade on concrete with not one running injury to show for it. Undoubtedly, you have your own opinion what works for you and science and facts don't get in the way.  Except for the fact that facts don't care what you think.
Posted by Dane at 11:36 AM

This is very interesting. As I think about my own running, it feels like my legs are more beat up from a road marathon versus trail (despite the trail run taking longer). I would suggest that the unevenness of the trail causes me to step more carefully, while my "less thoughtful" footfalls may carry more impact on the road. So could it be that it is no the hardness of the surface, per se, but rather how hard we hit it?

Ah, and of course, I sidestepped the real issue by throwing in the trail.

The hardness with which we hit if I am sure is exactly the same. Or at least close enough to make no difference. My guess is that trail marathons are normally run more slowly, with many variances in pace which is why you might be knackered from climbing and descending a ton of elevation but you haven't beat up you legs by running it hard.

Got a link to that study? Would like to read it.

As far as the actual surface hardness goes, I don't think anyone would see a difference. But there is a real difference between concrete and asphalt that's overlooked here - uniformity. Concrete forms a very flat, uniform surface. When your shoe hits concrete, your whole shoe hits it flat and has to quickly decelerate. Asphalt, on the other hand, typically has a lot of exposed aggregate making it 'bumpier.' When your shoe hits asphalt, it contacts the uppermost rocks first, and begins to deform at that point, as you continue down, the shoe gets increasingly more resistance as it conforms to the shale of the exposed aggregate. IMO, this does cushion the impact significantly. Dirt and gravel trails are even moreso this way. The cushioning is not in the surface itself - it's in how your shoe reacts to the surface.